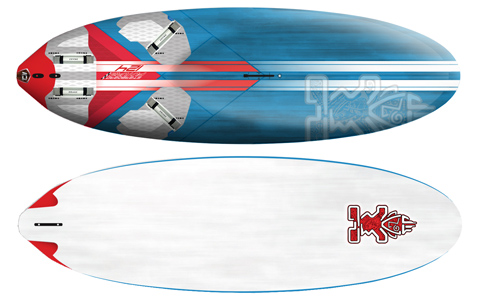 THE LOW-DOWN
Starboard’s Futura designs and line-up remain unchanged for 2016, yet they’ve been injected with a new lease of life that goes deeper than just their new sporty race-striped paintwork. Firstly, they now come available in Starboard’s ‘world’s lightest construction’ – the Carbon Ultra Core (on test here), proclaimed to be 10% lighter yet 30% stronger (than its predecessor ‘Carbon’ construction we presume). Combined with use of a unidirectional carbon layer and an Innegra carbon rail-band (helping crispness, rigidity and impact resistance), the Futura has been rejuvenated from the inside out. Fittings have also been updated, each board now supplied with a top quality Drake Ready to Race fin and the brand’s new Drake UltraLight straps, described as hydrophobic and thereby saving yet more weight (up to 670g when wet!). The 124, like its smaller sibling tested last year, has a distinctive shape, wide and blocky with the maximum width placed behind the mid-point, before narrowing quickly to a tail. The deck has a deep pronounced concave in it to lower the mast track and the tail has highly defined cutouts, leaving you in no doubt of the board’s heritage.

BRAND CLAIM
“The Futura formula: fast with maximum freerace performance. The speed of the iSonic and the gybe of a freeride board. We call it impossible engineering.” Tiesda You, Starboard Brand Manager.

PERFORMANCE
On the water the Futura does feel bigger than most others in the group and as such can carry the largest sail most recreational sailors would be interested in. Releasing smoothly from the water as power is applied, it builds momentum easily and feels incredibly secure and dependable underfoot, as if sitting low in the water, pinned down by the sail. It is a unique stance, as if it retains constant water connection giving it immense control and smooth response without any downside of feeling draggy or slow. Its planted nature encourages the rider to push power in to explore the board’s top end … and they’re not to be disappointed. Fast, yes, but so unwaveringly controllable that it defies logic how a board of this width can travel at speed so effortlessly in such turbulent conditions. And the Ready to Race fin supplied is a marvel, not once spinning out or rearing the board onto its tail even in conditions well beyond its normal remit. The perfect compliment to the board.
In fact, the Futura is so composed and versatile that it could be partnered with any sail type, from full on slalom foil to five batten rotational, happy to be loaded to the hilt or used to potter and cruise. Its dependable nature comes through in the gybe as well, remaining planted throughout and holding its speed through the carve, whilst seemingly requiring little input from the rider. One last word about the Ultralight straps. Suffice to say we weren’t fans initially … until we actually used them on the water!

THE VERDICT
The Futura is all about range. Massive wind range; massive rider style range and outlandish performance range, giving it a vast appeal. And in this Ultracore construction we believe it looks every bit the class act it is.