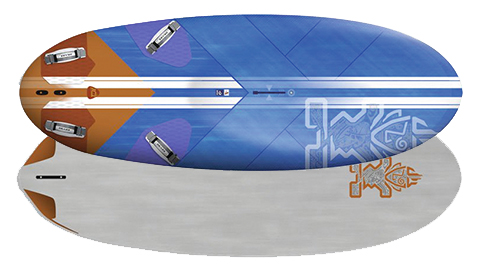 THE LOW-DOWN
Sparing only the 117 design of 2016, the Starboard race development team have completely revised the entire iSonic range for this season, benefiting from the feedback of World Champ Matteo and guided by Remi Villa (interviewed back in the June issue this year). The most obvious change is in the tail, the new designs possessing a rounded outline, with more volume and a reduced cutaway depth, said to improve the board’s gybing glide and exit speed. The reduced cutout depth is also attributed with an increase in stability and control in challenging conditions, without affecting straight-line performance. Sounds almost too good to be true! Whilst the board’s rails possess a hard edge throughout, the cutouts are certainly less elaborate than others here, with only one tier of depth … yet the same can’t be said for the iSonic’s deck shape. It boasts an incredibly pronounced scoop around the mast track and in the nose, said to keep the sail in a more powerful vertical position, making best use of the energy available. We were lucky enough to test the Reflex Carbon version of the board here – the brand’s premium construction, using biaxial carbon on top of their exclusive UltraCore sandwich core. It is described as their “absolute lightest” construction ever produced … and we can well believe it. Supplied complete with the brand’s latest Drake Ultralight straps (using a thin integrated x-ply layer to stop stretching), and thin diamond contoured deckpads, the 2017 iSonic is dressed in a similar sharp livery to its predecessor, save for the use of eye-catching fluorescent red on the tail.

BRAND CLAIM
“The 2017 iSonics are amazing because they’re just as fast as last year’s iSonics but more comfortable. The best thing is that out of the gybe, it is balanced and allows you to relax and get ahead of the pack.” Matteo Iachino

PERFORMANCE
Stepping onto the iSonic 107, it is capable of carrying a 7.8m easily, possibly up to the 8.6m quoted by Starboard, yet it does feel noticeably smaller underfoot compared to others in the group here. Deliver the power though and it bursts into action; more than simply scolding the cat, it’s as if you’ve set a firecracker off underneath it! Accelerating to warp speed in an instant, it can take the inexperienced pilot’s breath away, such is its nervously alert nature underfoot. Yet learn to trust it and the iSonic begins to show its degree of balance and unwavering self-assurance that will undoubtedly make it such a devastating weapon on race circuits around the world. It is just so incredibly planted on the water. Plough through a rogue bit of chop or suffer a momentary loss of concentration in a violent gust … and there’s no issue – the iSonic simply remains pinned resolutely to the water’s surface. We tried it in every sea state, from mirror flat speed strips to horrible coastal mush – we couldn’t even make it raise an eyebrow! It does have a flighty character, providing instant feel and connection to the fin, and yet it never seems to let go or provide cause for concern. In the gybe, the iSonic needs commitment, but returns with a smooth even bite that allows the board to glide through the turn and keep its speed easily, even in heavy seas.

THE VERDICT
We’re not quite sure how they do it … when we think Starboard have peaked in slalom boards of this size, they seem to reach a new high. This Reflex version certainly doesn’t come cheap … but learn to trust it and its performance range is something to be marvelled at.