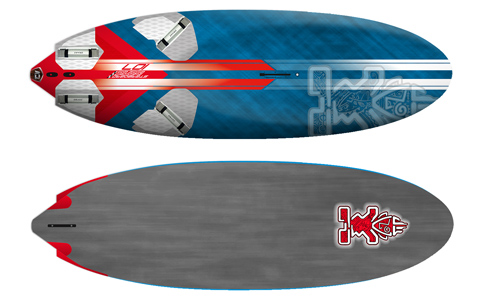 THE LOW-DOWN
The iSonic has rightly received high acclaim over the years, attributed for helping numerous riders to title wins and podium results on the highest stage. The 107 has often been classed as the gem of the range, and this year benefits from sharper rails for better release and a new deck shape in the tail, said to improve gybing comfort and enable quicker exits. It has a distinctive deep recess in its deck around the track and nose, whilst the rear of the board sees thin fish-scale deck pads (slightly thicker in the back pads for comfort), and the brand’s new Drake UltraLight footstraps. Seen first on the Futura we tested last month, these minimalist straps are described as hydrophobic as they don’t absorb water, thereby reducing weight by a reported 600+ grams – no small amount of weight. Available in either Wood or Carbon Reflex technology, the laminates are laid up in such a manner so as to affect the board’s reflex response according to its length, thickness and wind range.

BRAND CLAIM
“This year’s new shape evolutions aim to transfer mechanically more power from the sailor to the board in the light and medium wind models. Cross all sizes we have gains in efficiency, with new rail shapes and a new wet surface area. In all sizes we have sharper rails at this critical 45cm part of the rail. This increased sharpness improves water release for more efficiency or faster top end speeds and a greater ability to plane through lulls. It will bite upwind with more power reserve, so you have an improved overtaking advantage.”

PERFORMANCE
Despite its lower quoted volume, the iSonic certainly doesn’t feel out of place in this group and is one of the earliest to respond and release onto the plane. It is almost passive in its ability to plane, requiring little input from the rider. Once going, it accelerates like a guided missile, the nose of the board pinned down low to the water whilst the tail seems to sit high, providing plenty of traction and feedback from the fin. It really does have masses of low-end drive and potential in light to marginal winds, gliding through prolonged lulls and pointing effortlessly high, close to the wind. The aspect of the iSonic’s performance that impressed us the most, however, was just how easy it came. The board almost takes away the stress and intensity that often goes hand in hand with sailing a slalom board. You can even stand up over the board and ease out and the nose will remain transfixed to the water’s surface. And it is this level of control that really comes into play when the conditions turn on. It isn’t the most responsive underfoot compared to others in the group, but rather than trying to pick your way through chop to find the best path, the steadfast low stance of the iSonic inspires confidence to lock in and charge through the chop. The new UltraLight straps require tightening several times before they bed in properly, but once set correctly are easy to locate when moving back and provide a secure comfortable connection to the board.

THE VERDICT
With enduring control over a mammoth wind range, the iSonic is a force to be reckoned with. The ease and practicality to its character defies slalom convention, making its raw potential accessible to a much wider audience.