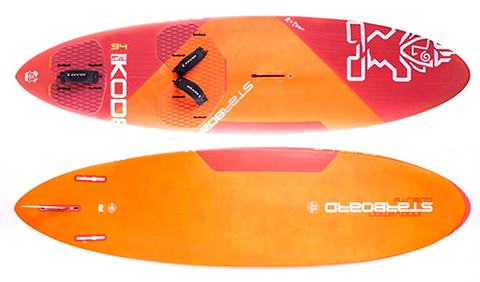 THE LOWDOWN
The designs within the Kode Freewave range remain unaltered for 2019, yet all four sizes are now produced in either Flax Balsa (tried here) or Carbon Reflex technology. The other change is that each model is now supplied with Yulex footstraps – described as the world’s first to be made with natural rubber. A sustainably sourced plant-based foam is combined with synthetic neoprene for UV resistance, significantly reducing the CO2 emitted during manufacturing, yet without jeopardising comfort or form. Placed on top of thick 10mm deckpads, using the brand’s familiar K9 anti-twist system, the Starboard website states the Kode Freewave is supplied with an MFC fin, although our test board came with a 30cm G10 Drake Freewave fin. There are also a couple of Starboxes present for a thruster setup, with lightweight blanks supplied to close the apertures whilst using the supplied single fin. With a rounded conventional outline, thin rails and a tapered pintail, the design of the 103 looks clean and uncomplicated, with only the low nose rocker (Starboard referring to it as ‘bullet-nose rocker’), giving a hint of any unique performance potential.

PERFORMANCE
Setting the Kode Freewave up for flat water initially, the deckpads are certainly thick, so care was taken to fully screw the straps into their outboard positions. As you provide power on the water, the 103 accelerates quickly, feeling lively and free underfoot. Drive more power into it and it thrives; certainly one of the fastest in the group, its speed comes easy, the low nose and flat stance on the water making it effortless to trim correctly, even in threatening, choppy seas. Comfortable and compact, it was a lot of fun for jumps and aerial trickery, punching and releasing off ramps at will. It skips and skims over the water, feeling engaging without being challenging, its pace belied by the ease and efficiency of the ride. It left us wondering whether the board’s performance could be extended further still with an efficient upright fin … and we would have tested the theory, had we had one with a US head! In the gybe, the Kode Freewave can enter with such latent inertia that it simply loves to be driven in forcefully. It will have the assertive rider champing at the bit to go again, whereas the more reserved rider will enjoy the balance and predictability provided by the extra width in the 103’s tail. Changing the straps to their inboard settings and using a 23cm / 2x 10cm thruster combination, and the Kode Freewave was primed, ready for a wave break. Preferring a more flowing rather than slashy riding style, it enjoys being pushed through its rails, feeling balanced on both feet and transitioning smoothly from rail to rail. Control is always there and it was easy to get the Kode Freewave to carry its speed, the thin rails in the tail linking with the fins to generate plenty of grip. The more we adjusted our riding style to it, the more we discovered how hard we could push the 103, without the worry of it stalling on its rail. Just push hard … and then push some more! Fast yet dependable, it was a lot of fun for making the most of typical coastal conditions.

THE VERDICT
The essence of versatility, wrapped up in a fast fun-loving package, the Kode Freewave 103 is the go-to option for those that are after a ‘one board does all’ in a classic shape.