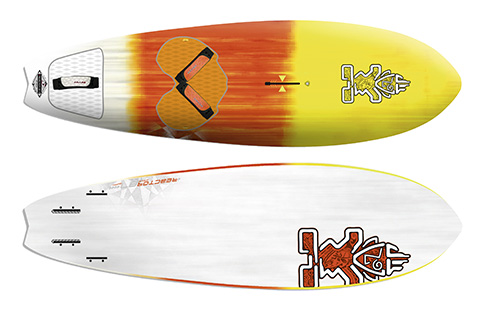 THE LOW-DOWN
A quick glance at the Reactor clearly confirms the board is derived directly from its predecessor – the Black Box. At 61.5cm wide, it is easily the widest in the group, its wide point placed well forward of the board’s mid-point, giving it a bulbous nose and distinctive fish-style outline. The middle model of a five-board range, we tested the carbon version of the 87 here, supplied with 2 x Drake Twin Surf 145 back fins and 2 x Drake Natural Wave 110 in the front slot boxes.

BRAND CLAIM
“It’s a turbo wave board. It’s so reactive, even in extremely powered up or larger wave conditions. When you hit the lip the tail follows through with explosive drive. It allows you to go wherever you want to go; spot the section you want to be at, and you’re there.” Scott McKercher.

PERFORMANCE
Step onto the Reactor and it is noticeably the smallest feeling in this group, requiring more power and encouragement to release from the water. Once going it didn’t feel as lively or assured underfoot as we’d hoped for, dropping off the plane quickly in a lull. Some discussion directly with the designers later and it was recommended that we put the fins right at the back of the boxes. We also measured the board’s weight and discovered it came in at over 300g heavier than the average … and significantly more than the other boards on test here. Interestingly, the back fins supplied are 145, whilst the website recommends 150’s. So would the fin movement change the board’s manner? We are pleased to say it did. With such a short length (not to mention its extreme tail design with pronounced vee and masses of tail kick) the board needs the drive from the fins, and once delivered it transformed the board. Planing much earlier and feeling more alert, it responds instantly to any change in foot pressure. It really likes to be powered and wasn’t really suited for any float and ride (the common misconception with its predecessor), but coped well with any wave environment we threw at it, from cross on mush, to smooth logo-high cross-off rollers. On the wave it really is a supremely addictive board to use, gripping confidently and capable of turning so tightly that it could suck eyeballs out of sockets! It allows you to make sections you thought you’d outrun or mistimed, whilst the wide nose rebounds off the lip for redirection down the face, and stays on the surface to enable you to finish the turn off.

THE VERDICT
Electric wave riding in a can, the Reactor is all about performance on the face of a wave and comes alive when powered. No matter what the wave size or wind direction, this board is the riding specialist tool to devour waves on demand.