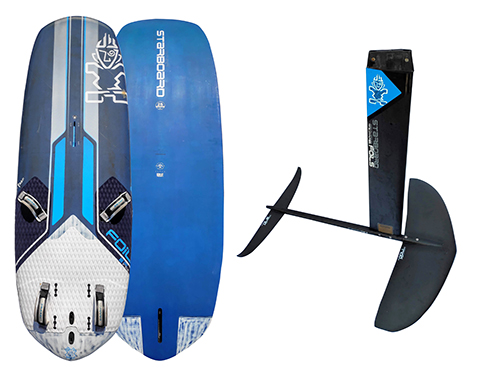 THEY SAY
A new style of foiling: manoeuvrable, smooth and super fun. Our easiest foil ever. The 1700cm2 front wing gives the sensation of floating on air and gives the lowest take-off speed.
The Foil 111 – the foil board for stronger winds. If you’re a high-level windsurfer using a 5.6 m² sail or smaller, this is the board for you. Short, compact, ultra-reactive and lightweight underfoot, the 111 is the most fun foil board of the family.

WE SAY
The SuperCruiser is the latest addition to the ever-expanding Starboard foil lineup, available in either carbon or aluminium, the name depicting the construction material of the 85cm mast, whilst all other components remain the same. And whilst the mast-fuselage junction enjoys the brand’s standard connection, the SuperCruiser sees a shift from their established modular system, using a sleeve configuration to marry the fuselage to the large low aspect front wing, and a so-called rocker system on the tail wing. And it is this massive front wing that largely characterises the foil’s performance. Generating significant lift at low speeds, it requires little input or pumping refinement to make the most of the lightest airs. The whole area of the wing seems to be put to use, providing both early flight and lateral stability. Smooth and progressive, it can be partnered with a variety of boards, from wide to narrow tailed, the lift coming right underneath the rider’s feet. Response to weight movements to control ride height is measured and fluid, the extended 87cm fuselage giving just the right mix of ride stability and quick reaction. The extra 10cm in mast length is also a massive bonus, providing margin for error and room to breathe in choppy waters. The pitch of the board’s nose and ride stance can then be altered through use of the tail wing’s rocker system by loosening a couple of bolts and providing an easy method to tweak for riding style, kit setup and conditions. Whilst certainly no slouch when pushed, the overriding feedback given as people stepped off the SuperCruiser was one of ease and enjoyment. It continues to generate lift at slow speeds and critical angles, making full flight gybing extremely easy, as if you’re cheating. It also gives the foil an extraordinary range, providing early accessible flight, yet retaining its manners and predictability in overpowered winds or turbulent seas. The large stabiliser wing adds to the stability in flight, but does mean the foil needs constant input and drive through the turn (more akin to a freeride board rather than wave), otherwise it will try to straighten up the carving angle. As such, it means the pilot can become more assertive and forceful in their riding style, getting away with using smaller sail sizes at all times and letting the foil become the predominant power source to keep driving. Described by Starboard as “a new style of wind foiling”, if you’re looking for plug and play wind foiling freedom for use in all conditions, the SuperCruiser will not disappoint.

The 111 is the second smallest in a burgeoning five board foil lineup, which has grown around the original 122 tested last year. Like its siblings it has a thin profile, particularly in the tail, providing more connection to the foil and feel through the feet. The deck has a subtle dome for comfort without diminishing heel pressure and the inboard-outboard strap options provide enough tuning to cater for all but the most race-oriented long-mast foil. The 111 is the narrowest on test here and it undoubtedly feels one of the most conventional underfoot and the ‘Drake Ultralight’ straps are easy to locate whilst getting going and during foiling transitions. Balanced yet playful and responsive, the 111 is best suited for foil masts of 85cm or shorter and can be partnered with a low aspect comfort cruising foil or loaded with a higher aspect freerace setup, for blistering hacks across a bay and sharp carving manoeuvres.