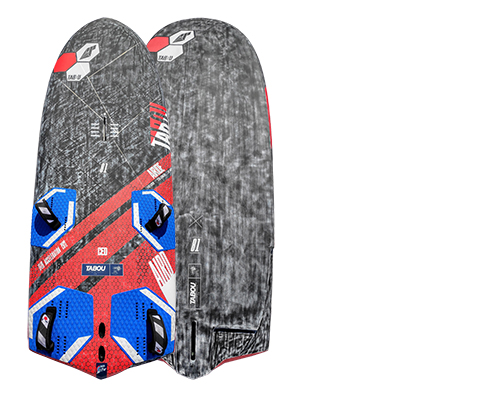 THEY SAY
Experienced foil surfers looking for the next step in performance, but also newcomers trying to get their first airtime.

WE SAY
Described by Tabou as their ‘Flying Sensation’ the 81 sits next to their race performance Air Ride+ 91, as the more accessible option. The idea is to provide a stable easy platform for first time fliers, yet provide plenty of speed and upwind potential to grow into. Mirroring nigh on the same outline as its larger sibling, its rails are super parallel, with what is described as a “more pulled in tail”, yet remaining wide enough to generate lift and purchase against the foil. The complex cutouts are then in place to reduce wetted surface area and promote release, whilst there are no less than three rows of six footstrap holes for each rear strap! Now that’s an abundance of options if ever there was one and said to enable the Air Ride 81 to cater for all foil styles, riding styles and abilities. There is also some confusion regarding construction options, with LTD stated as the dearer option on the Tabou website, yet the board here clearly marked as CED. Whatever its tag or title, there is a price-pointed alternative available in the AST technology. With a quoted volume of 145 litres, the Air Ride sits easily and comfortably on the water at rest, thanks to the additional stability afforded by a foil, making it easily capable of floating a 9.0m, even 9.5m at a push. Using the inset strap positions initially, the rider’s feet are sited well in from the rails, the deck flat enough to provide dependable connection through the heel, yet enough dome to remain comfortable. The deckplate position and straps can be moved forwards or back ad infinitum to fine-tune the rider’s stance position to the lift of each individual foil – a real bonus for ensuring comfort and confidence during those first tentative flights. Start sustaining flights and you soon realise the Air Ride has a real thirst to be loaded with a high aspect performance foil. Sure it can be setup to cater for a low aspect, cruising foil, with an inboard upright stance … but the width in the tail almost looks wasted! Instead, move the straps out and partner it with an efficient blade and the width allows the rider to really power up the ride and charge about at impressive angles. We used foils up to 105 cm in mast length and the Tabou copes without issue. Cover distances whilst exploring the four corners of your sailing arena, the Air Ride provides the comfort and connection to really push your foiling progression. In the gybe the flat deck helps, albeit the width in the tail requiring a two phase step over with the back foot to really master its cornering capacity. Rest it just over the centreline in preparation, but shift it right over to the leeward rail as you initiate the turn. More straight-line cruising or blasting than manoeuvre master, the Air Ride was a joy to use racing our peers around the harbour. Tabou may have taken their time to join the foil-specific party, but this 81 was certainly worth waiting for.