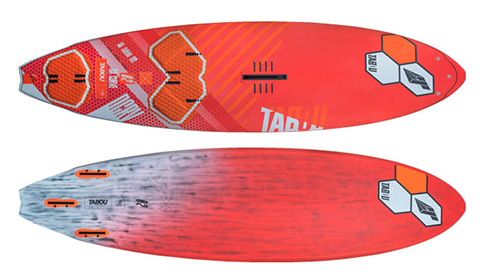 THE LOWDOWN
The Da Curve range has been updated for 2019 after the shapes have remained untouched for three seasons. The 88 is the second largest in a four board lineup and as with all its siblings comes solely as a thruster (thereby making a stated weight saving of 300g), the reason being that all Tabou team riders favour a three fin setup. The big design changes are focussed around increasing speed without impacting on control or turning ability, so a straighter rocker has been offset with thinner rails and a shorter rail-line in the tail behind the back strap. There is a defined wingered step to reduce tail size, combined with some pronounced channels radiating from the side-fins right through to the swallowtail. The pin nose and shoulders of the Da Curve have then been kept narrow to make it “more manoeuvrable at the top turn, because you have less rail in the water”. Produced in carbon Innegra and glass, it comes supplied with thick dual density diamond grip deckpads, Velcro straps and the brand’s own G10 designed fins – ‘New Carver’ – side fins with a very straight leading edge for speed and release. Interestingly, the Da Curve also comes with a couple of finbox blanks, so that it can be used as a single fin. There are also plenty of footstrap plug options – five in the rear and six for the front straps, intended to accommodate wide new-school stances for big wave riding, or narrower stances for more comfort in challenging seas.

BRAND CLAIM
“We added more versatility and top speed to the Da Curve by designing a straighter rocker, but still it turns quickly and easily, thanks to the shorter tail and newly introduced two channels.” Fabien Vollenweider

PERFORMANCE
At 230cm in length, and under 58cm in width, the Da Curve is both the longest and narrowest board in this test group, giving it a decidedly traditional appearance compared to its peers. This is also apparent on the water, feeling its quoted volume underfoot and certainly no more. That said, when power is delivered, it releases onto the plane smoothly and accelerates quickly to a fast speed, gunning its way through choppy conditions as if immune to the rough stuff. It encourages the rider into quite a locked in and committed stance for a modern wave board, feeling secure and familiar in powered conditions and easily capable of fulfilling a coastal blasting role. It just copes so well with the roughest surfaces, ironing out the nastiest shocks and allowing the rider to conserve energy for their next move or stunt. But it is on the wave that the Da Curve really begins to grab your attention. It is more front foot specific than any other board here and loves to be committed into full rail bottom turns. The rails grip so willingly and smoothly that you really don’t need to force the issue – just ask, and the Da Curve will want to corner. The drive through the fins and thin rails in the tail allow the rider to push through the back foot once the rail is set and change the radius of the carve progressively. It also becomes very noticeable whilst cutting back, the short tail helping to transition from rail to rail faster for maximum effect. For those that are looking for a definite carving, flowing nature in their wave board, the Da Curve is certain to hit the spot.

THE VERDICT
The 2019 Da Curve thrives on being powered, be it through wave power on medium/large faces … or by the wind. With a classic front foot biased riding style, it can be used to charge and carve purposefully around a break, with speed in abundance.