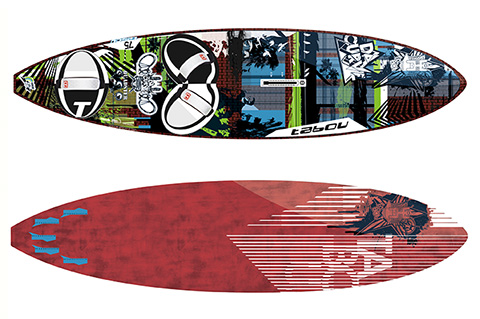 THE LOW-DOWN
Five fin boxes and five fins! The Da Curve comes with all you need to adapt to your surroundings. The 86L is the second largest of the range and can carry up to 6.1m rigs.

BRAND CLAIM
Designs perfected for more speed, easy planing and better drive in the turn. A perfect balance of speed and turning capability to keep you in the critical part of the wave. With one totally new board design brought into range in the 96L and a few key technical enhancements to the rest of the sizes make the 2015 the best all round Da Curve Quadster range to be put in production. New outlines and rocker lines with enhanced rail sections look to make the Da Curve a must in any true wave chaser’s armory.

PERFORMANCE
Having predominantly sailed the 95L boards for the first five days of the test we were keen to see how different the Da Curve performance varied from its larger sibling; the 94 Pocket. The new Da Curve is fitted with lighter weight slot boxes with adjustments to their positioning and also to the mast track in the search for earlier planing and overall poise. The result is a positive for get up and go. With a wide comfortable stance the Da Curve is easy to trim fore and aft. Underway in quad mode the board rides very positively and is in the top three for planing performance. The attempts to improve the boards carry on the wave by requiring less power from the rig to keep it surfing right in the pocket , has provided the by- product of endowing the board with an efficient hull dynamic to rival some of the larger 95l all-round boards with its low energy demands. As is the trend with many “side shore” labeled designs, the Da Curve is overall narrower and thicker in the center than the Pocket. This makes for nice float and ride stability and faster rail to rail response. The result is fast bottom turns followed by the top turn of your choice. We would recommend you start the tuning process by spreading the rear fin(s) and the side bites as far apart as possible. Then start bringing them together to speed up the turning reaction. Stop when you feel a comfortable setting you are in control of and that’s you done!  This Da Curve earned the nickname of DA Straight because of its eager planing prowess and carry. It’s easy to get a turn from and as Thomas Traversa has proved in contest time and again, (although we doubt he uses a board this big very often) a board that is easy to sail, like the Da Curve, allows you to do more.

THE VERDICT
Billed as “The most complete early planing and easy accelerating Da Curve Quadster range ever”. Minor tweaks on the 2014 model see it work very competently in the on-shore conditions. More adaptable than some side shore boards and still works well in onshore. Easy to ride and sweet to turn.