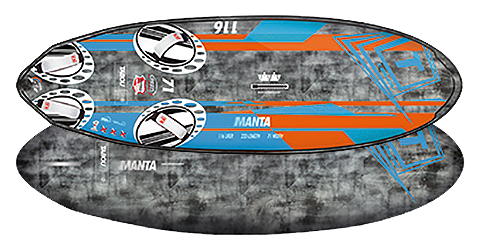 THE LOW-DOWN
The Manta has undergone some considerable work for 2017, with “countless prototypes” being put through their paces by the brand’s formidable PWA slalom team, not least our own world champ Ross Williams. As with the 85, the 71 is said to have been “completely redeveloped” for the new season, focusing on acceleration, top end control and gybing capabilities. Unlike many of the other boards on test here, Fabien Vollenweider has refrained from scooping the Manta’s deck out, preferring a flat surface. And my, the Manta’s deck is certainly flat, with a chunky profile in the tail and only the slightest dome in the rails from which to wrap your feet around. The deckpads are some of the thinnest in the group, aiming to accentuate the connected nature and feel coming through the rider’s feet; the cubed grip pattern providing excellent traction as usual. It is a very interesting design, with a real blend of aggressive extremes you’d expect of a race-winning thoroughbred, and more tempered features more commonly associated with mainstream freeride. For example, the new three-tiered cutout design in the tail is a wonder in itself, aggressive and complex … and yet countered by more inset strap positions than most and more tuck, even softness, in the rails. Even the Manta’s bottom shape gives off mixed messages – flat in the nose to straight double by the shoulders and vee in the tail. Traits that are more commonly associated with a control-obsessed freeride hull – it would be interesting to see how the balance of features translated to performance on the water.

BRAND CLAIM
“Changes to the outlines, rocker lines and bottom contours … result in a more direct feeling board with huge improvements in bottom end power. The new tail and cut out designs ensure earlier release and even better top end control and better still we have achieved all this without losing any of the critical top end control.”

PERFORMANCE
In years past, we’ve been wowed by the Manta’s raw speed and potential but always felt that it took a strong hand and iron mettle to really get the most from it. Well, that has all changed for 2017. This year’s 71 is much more focussed on control. Don’t get us wrong – it is still a fire-snorting racing machine, more than capable of winning races, but this new design always feels like it is vying for you … rarely flying erratically on its fin or misbehaving. Lively and connected underfoot, you can really drive through heavy seas with conviction, the board staying planted and secure, dancing through the chop and wave crests rather than flying precariously above it. To say it is more like a freerace board would be to do it a disservice and understate its credentials in the right hands, and yet the Manta has certainly become more accessible, such is its newfound balance and riding posture. There is plenty of volume and width in the tail of the board, providing instant response to changes in foot pressure, the thin nose sitting low and skimming over the water. With the deckplate placed further forward in the track than we would normally set, there was a real sweet-spot, the shoulders of the board remaining low and rock steady, whilst the thick domed rails in the tail felt comfortable underfoot for long periods, providing plenty of purchase with which to drive against the fin. In the gybe the Manta also really impressed us this year, with the flexibility and willingness to change its radius mid-turn and incredibly smooth throughout, making it hard not to come out of the corner on the plane.

THE VERDICT
The Manta has matured, and whilst it still has a beast within regarding its performance potential, its balance and control make it as accessible to the aspiring slalom sailor as much as the seasoned pro.