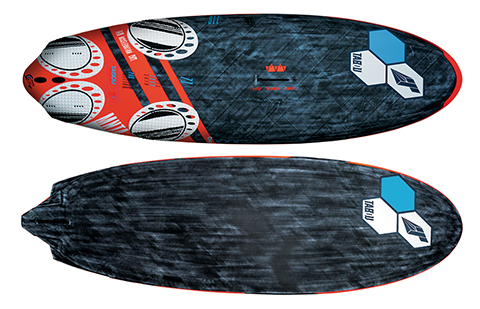 THE LOWDOWN
Aimed squarely at ‘professional slalom racers’ the Manta remains in Tabou’s 2018 range as their no-compromise eight board speed/race option. And whilst the two siblings either side of the 71 have undergone facelifts for the new season, the 71 remains unaltered. Sporting the new Tabou logo and a brighter paint job, it comes supplied with the same deckpads as last year’s model and the brand’s familiar Velcro straps. The deck is flat around the mast track rather than recessed or scooped out, whilst the tail shape is very distinct, being angular and cutaway rather than rounded or smooth. The cutouts themselves are some of the most complex around, working on several different tiers and angles. It means that the tail’s surface in contact with the water is one of the narrowest here, whereas the deck width in the tail is actually one of the widest. The four largest designs in the Manta series are classed as Team models and as such are produced in 100% carbon construction, the 81 and 85 offering the additional benefit of being supplied with foil-ready boxes.

BRAND CLAIM
“Whether light winds in Korea or 40knts in Fuerteventura, our team needs an outline, rocker and cut-outs that are optimized for the PWA slalom course. For 2018, Ross Williams and Cedric Bordes worked with Fabien to increase both wind range and performance of the 66 and 81.”

PERFORMANCE
The Manta really impressed us last year with its newly accessible performance, moving away from its bucking-bronco reputation of past incarnations. So it comes as little surprise that the 71’s design remains identical for 2018. Carrying a 7.8m easily, it releases cleanly and accelerates feverishly as power is applied. Fully powered, its stance on the water is very purposeful, with plenty of feedback given through the wide voluminous tail, whilst the nose of the board stays low and hovers over the water’s surface. You can really sense the fin through the back foot, making a choice of blades to partner the Manta all the more important as it can really change its character. Comfortably powered in 7.8m to 7.0m weather, the 116 is in its element, electric on all points of sail and really thriving on being driven hard. It carves through turns beautifully, feeling much smaller than its quoted volume would suggest and capable of varying its turning radius in an instant. Perhaps a little more technical than some others here to consistently come out at speed, it was nevertheless an enticing challenge to repeat many times in a session. As the wind increases the Manta can begin to grow horns and act like a petulant teenager if sailed passively or left unloved. A little re-tuning (such as moving the mastfoot further forward in the track) or driven with a more forceful riding style, and it soon settles – it is incredibly adaptable; you just need to learn to match the setup with the conditions. Control is always within reach, and when you understand this you learn to trust the Manta, exploring its raw potential that ultimately makes its changing temperament worthwhile. Much like an elite sports car, if you get the setup wrong, it will have you tail-fishing into a nearby ditch. But spend time getting to know the Manta to achieve the best setup and you’ll be the talk of the town.

THE VERDICT
A sharp, highly adaptable weapon that always feels ready to battle on the water, the Manta is nonetheless easily within the realms of possibilities for the recreational sailor. Just invest the time playing with the setups to achieve the best results.