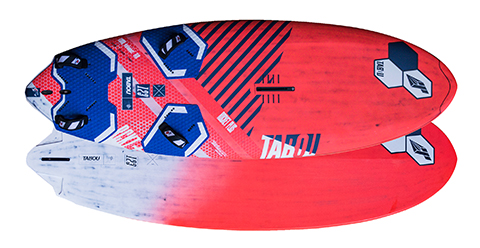 THE LOWDOWN
The Rocket Plus is an all-new lineup to the Tabou ranks, taking the place of the much-loved Rocket Wide series. The 113 is the second smallest in the range and, as with the rest of the series, is produced in either standard CED construction or their lighter and dearer LTD technology, as tested here. Taking a closer look at the board, it retains the same wide outline as its 110 predecessor and has a similar distinct bottom shape, with a combination of vee and extremely deep concaves in the shoulders, before morphing into a mono-concave between the straps. It also keeps a decidedly flat deck shape and comes supplied with the same fin … yet there are a few noticeable changes in this new design that deserve comment. Firstly, with the omission of the Speedster amongst the Tabou fold, the brief of the Plus has been evolved somewhat, with no apology made for its performance credentials being pushed. The most visible asset to suggest this change can be found at the tail of the board, with an incredibly complex cutout / tail configuration more commonly reserved for slalom thoroughbreds. The second hint at a role change can be found on the rails, the 113 possessing hard, defined rail edges from tail to nose … cushioned only by a subtle amount of tuck. Could this be a hat tipped in favour of foiling – a discipline that the 113 and its larger Plus siblings have been actively promoted for in the brand’s literature?

BRAND CLAIM
“The front v double concave to v in the tail creates the impressive power of the rocket +, which can be easily turned with its thin rails. The strong deep tuttle box allows you to go foiling in the slightest breeze.” Fabien Vollenweider.

PERFORMANCE
Stable and comfortable at rest, the Rocket Plus has plenty of width and buoyancy to carry large sails and riders. It does like to be pushed off the wind to get going, but responds superbly to a proactive style, releasing and accelerating with tangible enthusiasm. Moving out into the straps, the rider’s feet wrap comfortably around the board’s thin rails, the width in the tail providing plenty of feedback and connection to the fin to push against. Hit by a gust and the 113 responds positively to any additional power delivered, rising up to hover over the water and fly on its fin. Saddled with an efficient rig, it’s pure dynamite off the wind, yet remains controllable and responsive to the hunger or inclinations of the pilot. That said, a more nervous or tentative sailor may initially become over-awed by the board’s eagerness, but moving the footstrap positions inboard increases the 113’s wetted rail line and helps to dampen its intensity. In the turn, the thin rails and rounded outline do help it to respond to the rider’s commands. It does feel wide in the tail compared to others in the group and undoubtedly becomes more technical and input craving in choppy seas, particularly when its entry speed is so accessible. It may take a little more finesse and guidance to achieve perfection, yet it provides the platform and challenge for hours of enjoyment and exploration. And if the wind is light, then all is not lost – with its wide tail outline and flat deck, the 113’s finbox / footstrap setup has been carefully considered to make it an impressive foiling platform for sails of 6.0m and smaller. It is one of the new generation of foil-ready boards that can justifiably hold the ‘hybrid board’ tag, being designed specifically around foiling as well, rather than its foiling role simply being an afterthought.

THE VERDICT
The Rocket Wide is quite the dynasty to live up to, yet the Plus achieves it with ease. Speed comes easy, making the 113 both fun and exciting in all conditions. Partner it with a decent sail and fin and when the chips are down, it could be a slalom giant slayer!