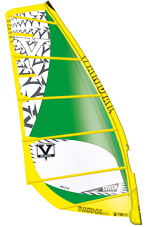 OVERVIEW
The Stitch stays in the Vandal range as their 6-batten freeride/freerace sail, but sees an update to its design for the new season. Stability and performance are said to have been improved by incorporating 3 tubed battens and what the brand are calling their Bionic Concave Panel (BCP), the triangular curved design around the sail’s window, attributed for distributing loads more evenly. Rigged on a 75% 460cm SDM, the Stitch sets relatively flat at rest, the three lowest battens sitting next to the inside quarter of the mast, retaining some rotation. With a significant amount of luff curve to the sail’s leading edge, its leech falls away noticeably in the upper panels whereas the mid-leech remains tight. Build quality is clean and apparent, possessing all the detailing you’d expect of a modern sail and includes their own newly developed “IYU” neon water repellent mast sleeve material, which Vandal claim is both the lightest in weight and strength around.

BRAND CLAIM
“For 2016 we have improved the entire range giving the rider more control and improved power, allowing faster board speeds. The Stitch is the perfect companion to any freerider out there looking to use anything in the 90-180 litre freeride boards and who wants to go FAST! The 2016 Stitch does everything for you, just hook in, lean back and feel the acceleration. For a non-cambered sail you won’t believe the speed and stability delivered with such ease. Simply enjoy.”

PERFORMANCE
On the water the Stitch provides an easy obvious power source that can be used for cruising comfortably over long periods in a more upright and relaxed stance. With such tension in the leading edge, the sail feels firm and solid in the hands at idle, filling to a deeper profile as the gust hits. The pull is steady and progressive, the centre of effort placed relatively far back in the draft compared to others in the group. It is less focussed than many, providing broad palpable feedback to both hands and giving the sail a straightforward, uncomplicated character. So much so in fact, that whilst its increments wouldn’t suggest it, the Stitch feels larger and more brazen than most in this test group. In marginal variable winds, this can serve as a great comfort, the sail providing constant useable power and always there to lean against. In stronger winds the Stitch retains its stability surprisingly well, yet is tiring to pin down forcefully over long periods, requiring a strong hand and a determined pilot. Instead, it is much easier to stand more upright over the board and ease out with the backhand, the Stitch happy to become more neutral and exhaust excess energy, before choosing your moment selectively to throttle back up.

THE VERDICT
More freeride than freerace, the Stitch provides an obvious uncomplicated power source, best suited for easy enjoyable cruising rather than locked in blasting … and at a price that can’t be sniffed at.