This feature was originally published in the November/December 2016 issue.

“Every morning I start my day by checking the surf and wind forecasts. Today’s forecast was for winds out of the WNW at 18-23 knots in the afternoon. The morning overcast was already burning off, so the day was setting up for some good wind out on San Francisco bay. When I rechecked the wind report in the early afternoon, it was starting to pick up, so I loaded up the car and headed down to the local launch. There were already a few windsurfers out in the water, and they looked powered up. After weeks of an eddy shutting down our normal summer wind pattern, I was ready for a good session. 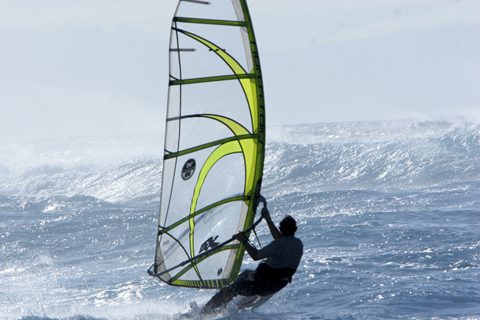 I carried my board down to the floating dock and jogged back to the parking lot to rig my sail. While I was wrestling my wetsuit on, a car pulled up next to mine and a salt and pepper haired woman got out and walked over to me. Her car looked out of place next to the SUVs, pickup trucks, and vans bristling with windsurfing equipment. Occasionally couples and dog walkers would come out here and park, but those types usually parked down on the other side of the lot, away from the frenetic activity of the windsurfers. She looked a bit tentative as she approached, and said, “Are you going out in the channel?” “Well I hope so…looks like pretty good wind and the tide is nice and high.” “Can I ask you for a big favour?” Immediately I sensed what the favour was going to be. “Today is the one year anniversary of my husband’s death…we used to come here all the time to windsurf. Would you scatter my husband’s ashes out there for me? You sure you’re going way out in the channel? He wouldn’t want to be in the mud flats.” “I’d be honoured to do that for you,” I replied. “We loved it here. He was always better than me, but I was right behind him. He was first to water start, and plane, and use the harness…. but I was right there just a little behind, trying to keep up,” she said.

She reached in her purse and pulled out a small burgundy coloured drawstring pouch and handed it to me. “Do you want me to open the pouch and scatter his ashes in the wind?” I inquired. “Oh no…. just drop the whole thing in the water…. it should sink. I really appreciate it. I’m so glad it was windy today…it hasn’t been very windy lately.” I tucked the pouch under the neckband in my wetsuit and it held in place between the wetsuit and my chest. “What was his name?” “Pete,” she said quietly. The wind had picked up a bit, I put the board back in the water and looked back at Pete’s wife, giving her a thumbs up as I was sailing away. Before long I was out in the channel, out to the point you think it would be wise to turn around and head back towards shore. I didn’t see any other sailors around. This was the spot. As I held the boom with my right hand, balancing the sail with my weight in the harness, I reached down the neck of my wetsuit with my left hand and grabbed the pouch. As I was pulling out the pouch with my wet hand, the neckband snapped back against the pouch, sending the pouch flying out of my hand. It was one of those moments when things seemed to be happening in slow motion. I saw the pouch sail away in the wind stream, arching down to the water. It landed about 15 feet behind the board, due to my forward motion, skipped on the small rooster tail wake, hung on the surface for just a fraction of a second, and then peacefully slipped under the surface. “Sorry Pete,” I thought to myself…I had wanted to have a little more in the way of a ceremony…it just happened so fast. Dedicating a few more runs back and forth in the channel to Pete, I headed in. The cloud topped coastal mountains were in the background as I sailed in through the glare of silver-blue water. Pete couldn’t have asked for a more beautiful day.

Finally reaching the dock, I stepped onto it, detached the rig, and placed my board to the side. I carried the rig over my head, balancing the sail in the wind, and headed back to the parking lot. When I got back to my car, Pete’s wife was standing there looking past me, looking out over the wind-capped bay. The wind was blowing her hair forward over her sunglasses. “It was really windy,” I said. “We were way out there…got him way out in the channel…gave him a good ride.” “Thanks so much. I’m so glad it was windy today,” she responded as she wandered over to the bench at the overlook and sat down, pulling her collar up against the stiff breeze. By the time I loaded up all my gear in the car and climbed out of my wetsuit it was approaching dusk. As I pulled out of the parking lot I could see her in my rear view mirror keeping her silent vigil… gazing out over the water as Pete became one with the tides.”

About the Author
Noel Smith spent his youth in the Washington, D.C. area, Oahu and Southern California before beginning his professional career as a dentist in the San Francisco Bay area. He has been windsurfing for 37 years and still has an original Windsurfer up in the rafters that he purchased in 1979. Newly retired, he is windsurfing, surfing, and skiing as much as possible, splitting his time between Menlo Park and Truckee, California.

“Do you want me to scatter his ashes in the wind?”