When Thomas Traversa admits a session was frightening, you know it must have been seriously heavy conditions! Buckle up for his story on how he windsurfed and survived huge scary Nazaré, followed by what he describes as one of his best ever sessions in Portugal at pumping Peniche. This big wave feature was originally published in our January / February 2021 issue.

I had a plan to go to Portugal for two or three weeks in November for several months. When they announced the lockdown was going to happen in France, we were still in Brittany! We wasted no time and drove home, and the next day packed everything into our camper van and drove to Portugal. We did not want to be stuck in France in case they would close the borders! I saw that the forecast was looking good, solid waves and strong north winds for a couple of days… but we were going anyway. So, I guess that was kind of lucky to get there just in time for the swell! 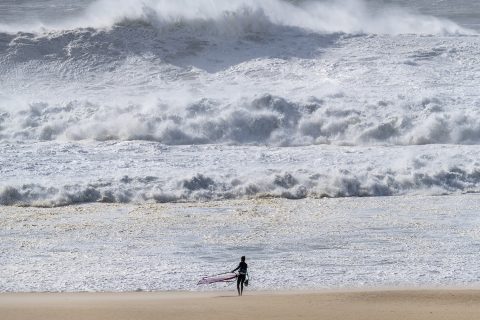 Thomas heading out at Nazare!

My friend, Mat Pelikan, had been on the water at Nazaré the previous week, taking pictures of the surfers during that huge swell episode from hurricane Epsilon. While driving to Portugal, I called him and told him that I wanted to try to sail Nazaré again. He helped me to organize jet ski safety and, in a few hours, everything was set, one jet ski for safety, another ski for him to shoot video from the water, and another friend filming from the cliff.

Usually I like to keep my sailing plans simple and spontaneous, but for Nazaré it is a different story, you need to be prepared. The conditions looked really promising with strong cross-off winds and a reasonable swell. Nothing too big! Riding Nazare when it is really big is something I am not sure I want to do, so one of the challenges for me is to be there with waves big enough so the spot works, but not too big either! I also called Alex Mussolini to ask if he wanted to join me for 2/3 days of epic sailing. He was up for it, but did not want to sail at Nazaré so we planned to go to Peniche once I was done in Nazaré. 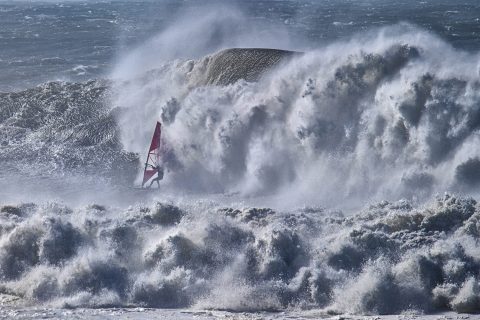 Escape from a monster wave

Of course, all this preparation and anticipation adds extra pressure! Once the jet ski guys were there as well as the video crew, I kind of had to go no matter what the conditions would be! In the morning, the wind was already howling, but the waves did not look that big. I thought it might be kind of too small to really work. But we prepared at the harbour anyway, and I sailed upwind from there, with the two skis by my side. As we were getting closer to the cliff, I quickly realized that the swell was much bigger than what it looked like from the beach!

I decided to keep sailing upwind to the north of the cliff, to start the session as far as possible from that scary chaos happening at the bottom of the lighthouse! I think I took at least 10 to 15 minutes before committing to my first ride. With the low tide the waves were breaking far outside, so I was extremely nervous. With the waves coming from everywhere and without any real pause between sets, it felt scary to finally drop into the first one. After a quick turn on the shoulder, I kicked out and got out the back as quick as I could!

The wind was very strong, probably 25/30 knots on the outside, making everything even more crazy with the big chop, but once in the inside I was glad I could plane to go back out in no time! There wasn’t a moment when I felt comfortable during that session, I kept dropping into waves not knowing what was going to happen, but at the same time I wanted to place myself as deep as I could and really use the steepest part of the waves.

At one point I was in position to catch a big wave on the outside, it had a soft section to roll in on, and then a large wall down the line waiting to transform into a heavy section; but the softer part of the wave broke earlier than what I thought it would and a huge lump of whitewater suddenly came very fast towards me and hit me from the side! I found myself holding onto my sail thinking I just dropped into the most stupid and dangerous section ever! Somehow, I did not fall and managed to emerge from the whitewater after a few seconds, only to find myself going down an 8 metre wall that was about to throw a giant lip on me! I just managed to clear the section and kicked out feeling like I just escaped the worst wipeout of my life, my heart was beating to the max, I even felt my legs shaking!

After that intense moment, I had some more solid drops, but I felt like I didn’t want to risk too much! I told the guy on the ski that I had enough and I was going to stop. I decided to drop into a final wave closer to the cliff, a mean one! But as I was going down the face, I realized that it was closing out on me, and just chickened out in front of the wave, trying to go as fast as possible so as to not get caught by the whitewater. I finally reached the beach and felt really blessed to be in one piece! 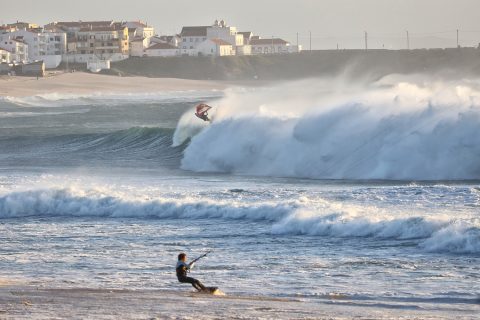 Alex came down to help me carry my equipment to the camper, where Sophia was casually having lunch with our two daughters. I was really happy that nothing bad happened, I did not go crazy and hit a giant lip but I felt like I did my best! We then went to Peniche as planned and we were hoping Supertubos was going to be good. When we arrived, we could not believe how epic it was! Heavy mast-high barrelling ‘A’ frame waves, 25 knots side-off, not one surfer in the water, it was simply perfect! 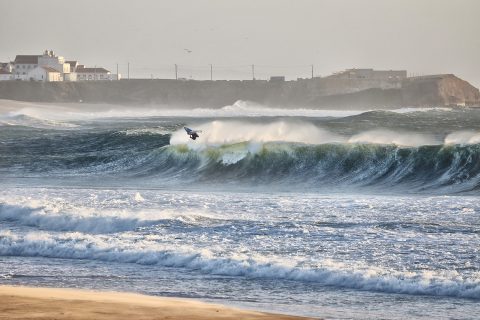 The waves were so clean, glassy, fast and heavy at the same time. It was one of my best sessions ever in Portugal, and after sailing Nazaré in the morning, I was in the right mind to enjoy and commit to hit the lip on some bombs. It was so good that we sailed until it got completely dark. 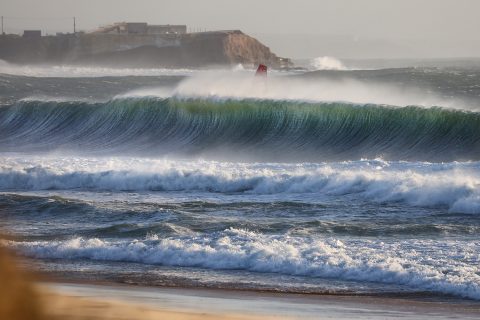 So much happened in one day, it was one of the scariest and then one of the best sessions ever – heaven and hell, but I was over the moon to have scored. 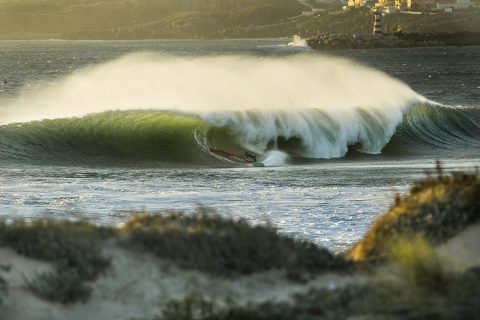