The weather may have been poor, making photography difficult, but that didn’t stop Thomas Traversa becoming the first person to windsurf Nazaré at size in port tack conditions. From our April 2021 edition of Windsurf Magazine Thomas tells us more about the groundbreaking session.

As I already had scored a session at Nazaré last November, I did not really have any plans to go back this winter… until ‘Charlie-Paris’, a watch company, got in touch with me around Christmas. They were keen on shooting a video with me there for the release of a new watch later in 2021. Honestly I was not sure we would get a good forecast, but we agreed on a budget and started to organize things, just in case. 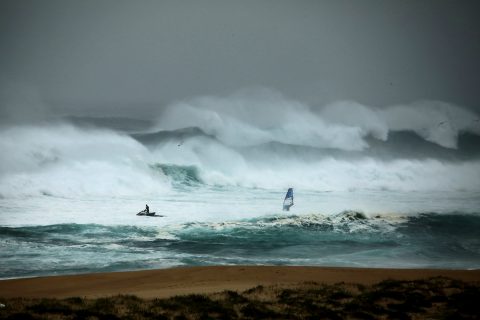 I had always been hoping to windsurf Nazaré with south winds, so that I could actually ride the big waves in front of the lighthouse. South winds are port tack, I thought it would be perfect to start on the main peak and ride down the line towards the north end of the beach. On my two first sessions there the wind was coming from the north, that is to say from the right… and on each wave ride I was looking down the line at this terrifying cliff, where the biggest waves were waiting to crush me if I could not find a quick exit. 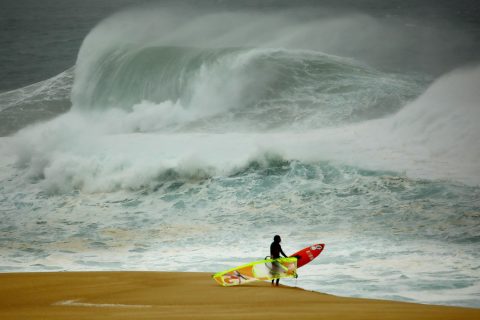 In early February Windguru forecasted what I had been waiting for: strong south/southeast winds and a proper swell. It was an opportunity that I could not miss, so I got in touch with my friend Mat in Portugal and we started to organize the session. He would take care of filming with the help of a local crew, and it did not take long to convince Lourenco Katzenstein, a talented Portuguese big wave surfer to do the safety for me. Lourenco had driven the ski for me last November, so he knew what the mission was about and I totally trusted him. This time though it was a bit different as we had to ask for all kinds of authorizations because of the Covid-19 situation. Getting to Portugal was not a problem for me, but once we were there the vibe was so different from the usual Nazaré madness. Nobody is allowed on the water and on the weekends the country is under a strict lockdown, which means that there is no crowd allowed on the cliff, or even in town. 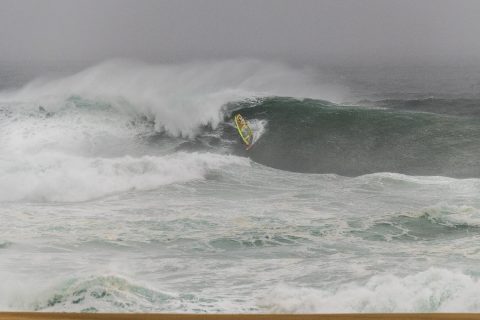 Thomas deep in the pocket at Nazare. Photo Heidi Hansen

On the Saturday morning the swell looked solid and the wind was blowing at 20/25 knots cross-offshore. Unfortunately it started raining as soon as the sun rose, and it only got worse as the day went on. The forecast was for the wind to switch more onshore and to drop around midday, so we were ready super early and we left the harbour around 8 a.m. I was very excited, but a bit concerned by the conditions. During the morning check I noticed that the waves had a tendency to close out along the entire beach. It was not as peaky as it usually is; it looked more like very clean, but extremely long walls without much space to escape.

As I arrived to the peak, sailing downwind from the harbour well powered on my 4.2, I got the feeling that it was going to be really tricky to get a wave without getting stuck inside, all the sets seemed to be closing out. I waited a few minutes until I decided it was time to roll the dice. I had a nice setup turn and was going for a second one when I realized that the wave was peeling way too fast. I had no choice but to go straight, and when the whitewater finally caught me, my mast snapped… and with it my hopes of having a dream session. I made it to the beach with the help of the jet ski, got another mast and tried to sail from the beach, even though I knew I had no realistic chance to make it through the 10 metre-high closeouts. I hurt myself on the first wave I tried to sail over, and after drifting for at least 20 minutes inside, without enough wind to do anything, I gave up and swam towards the beach. As a result I got smashed in the shorebreak, broke another mast, and then walked 20 minutes to get back to the car park in front of the main peak. I was literally broken, my arm was hurting, I had lost 2 masts already and to cap it all the film crew told me that they missed my first and only wave!

The only option was to stay in my wetsuit, jump in a car, drive back to the harbour and restart everything from zero. I was very concerned with the pain in my arm but I decided to give it a try. This time I went with a 4.4 because I knew that the wind was extremely light on the inside and I approached the session with a different strategy. I noticed that the only place where the waves were not closing out was in front of the lighthouse at the south end of the beach. So I stayed there and waited for a set, with Lourenco next to me on his ski. I was feeling so much tension, so I focussed on breathing deeply, trying to relax a bit…and after a while I took my chance and went on the 3rd or 4th wave of the set. 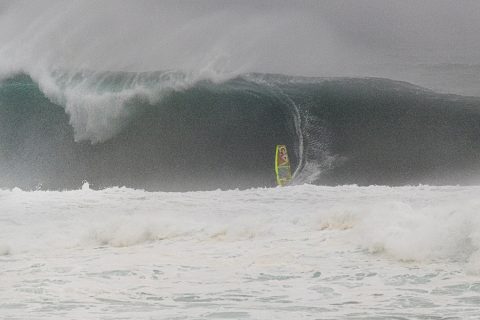 Thomas drops in on a monster Photo: Heidi Hansen

I was sailing towards the cliff waiting for the wall to stand up in front of me and dropped into a big choppy one. I made it safely to the shoulder without even really trying to do a turn, gybed out of the wave and managed to sail safely back to the outside; what a relief! After that first wave I got more confidence, the adrenaline kicked in and I had maybe 3 or 4 other waves, until I went on a big one that Lourenco signalled to me to go on. I was about to catch the one in front, but I’m glad I didn’t as this one was particularly big and very glassy, so I could set up a mid face bottom turn and do a top turn right under the section… that felt amazing, so much power and such a wild atmosphere. There had been much frustration at the start of the day, but finally I had my moment, definitely the biggest wave I have ever ridden out there, a real Nazaré wave. 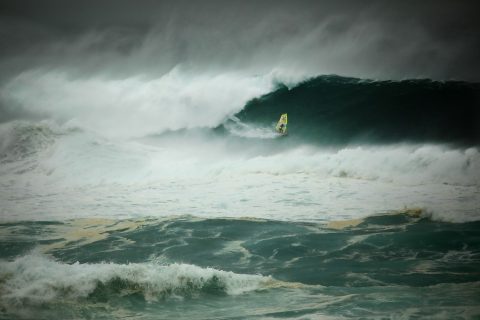 I knew it was time to head back to the beach after that, I had done my best. My brain took over the situation and I rode one last wave to the inside, feeling blessed to be relatively unharmed and to have ridden such a beast of a wave. I had to pay some dues though, my arm got badly bruised after getting it stuck in the boom while being punished in the whitewater earlier. Once the session was over, when I took off my wetsuit I saw had a deep cut behind my elbow so I had to go to the hospital to get stitches. It wasn’t a big deal, but one week later it still hurts above and below my elbow.

Sailing port tack Nazaré was even scarier and harder than what I thought, but now I know what it feels like, I definitely want to come back again with southerly winds and try to catch an even bigger one… it’s a lot of work, but it’s definitely worth it.