From our August issue, we caught up with Gran Canaria high flyer, Alessio Stillrich, a whole season after a horrific fracture in his leg after he crashed an aerial in Cape Town in 2018. In early 2020 Alessio Stillrich was back in South Africa sailing as well, and of course going as big as ever! John Carter talks to the young gun from Gran Canaria about his move to the Simmer team, recovering from injury and how he learned to windsurf in Gran Canaria! 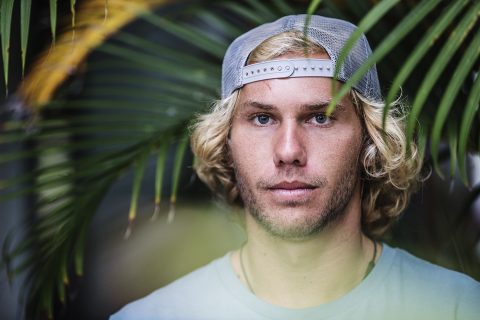 JC: How did you get into windsurfing?

AS: Claus, Moritz Mauch’s father, gave me an old beginner board from his windsurfing school and I decided to give it a try. After trying to learn by myself I decided to go to a windsurfing school in Pozo back in 2009. I started to progress quite fast and I enjoyed sailing more and more after every session. I first sailed in the beginner spot of Gran Canaria called Bahía de Formas and after half a year I was ready to start sailing in Pozo. 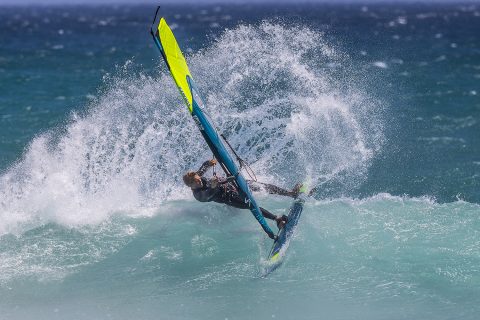 JC: In Pozo do you just have to learn on a tiny sail?

AS: Yes, I remember using 1.5 and 2.2 sails in the windsurfing school. Actually, the first sail that I bought was a 2.7 and I was stacked on it many times that summer! I weighed around 40 kgs at that time, so my experience with sail sizes for learning how to windsurf was relevant to my size, but I would say that even adults need to use tiny sails learning in Gran Canaria as it is so windy here! 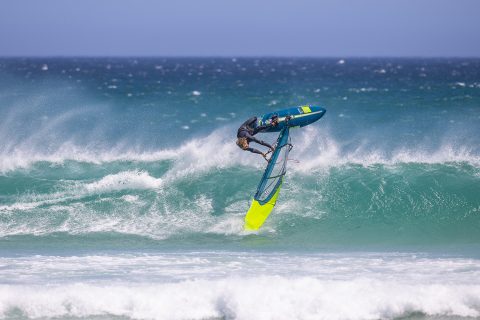 Back in the game!

JC: How different is it for guys like you to be brought up sailing nuclear winds on small sails?

AS: I guess it makes everything more difficult, but you also acquire a good high wind technique from the beginning. I think it is a good way to learn. We also get a lot of wind and it blows for many days in a row, this is also ideal as you progress faster.

JC: What is it like when you suddenly have to go to float and ride conditions when you are used to sailing in high winds?

AS: It was a bit tricky before I started travelling. Sailing in different places like Cape Town and Maui or even Klitmøller (Denmark) and Sylt (Germany) forced me to get used to these type of conditions. It is quite a big contrast to what I am used to, but now that I have improved in wave riding over the years, I really enjoy float and ride conditions! 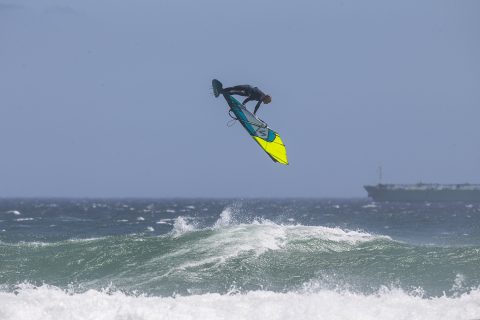 JC: Your signature move is the tweaked push loop table top…can you explain to us mere mortals how you do it?

AS: To be honest, I struggle a bit to explain how I do my moves, but I can give a couple of tips. I try to go really vertical at take off. On the highest part of the jump I throw my sail downwards, like as if I would be doing a goiter. Once I am in the tweaked position, I try to push my sail against the wind gently to get upright again and prepare for landing. I struggled to learn this move. For some reason, I could not tweak my push loops for many months, but one day I managed to figure out how to get in that tweaked position and ever since that moment I love this move.

JC: What about going big! You seem to go extra high compared to the average rider, even the other pro sailors…what is your secret to boosting higher than the others?

AS: I think that living in Pozo and learning to sail there is a big factor as you definitely need a lot of wind and good vertical ramps with onshore wind to boost high. Speed is also very important, the faster you approach the ramp, the higher you will fly. You should also keep your body tight and close the sail with your back hand to gain maximum lift in the air. I also like to use very long harness lines since they give you a lot of mobility to correct your mistakes. I love to go big in jumps! The bigger I go, the more stoked I feel! 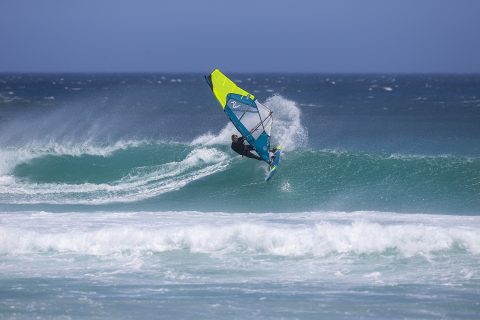 JC: How tough was it taking all that time out with your leg injury, both mentally and physically?

AS: Well it was a very difficult period, especially the first few weeks when I still was in Cape Town waiting to fly back home. I basically laid on a sofa for three weeks and saw how everybody was going sailing while I knew I could not windsurf any more for a very long time. Physically it was hard too as I had terrible pain in every small leg movement I made for the next three months.

I think the worst period mentally came in June 2018. Everybody was arriving in Pozo to train for the world cup and I was still not able to sail. I live in Pozo, I can see the beach from my house, so it was quite hard seeing everybody charging and it was the first world cup I haven’t done since I started competing. I also split up with my girlfriend during this period, so my life in that moment was not really in a good place.

JC: How did you stay strong during your recovery?

AS: I just thought that I want to continue the life I was living and that I had to work hard to get it back. If I would recover well only depended on my rehab work, so I just trained and stayed positive with one goal in mind – to come back as strong or even stronger than before. 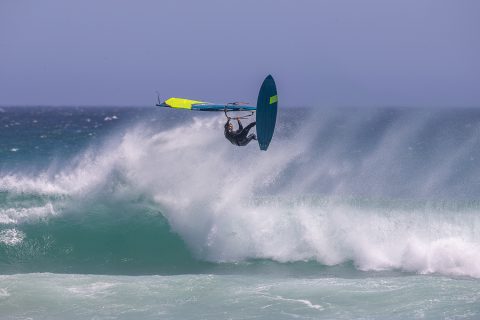 Putting the new Simmer gear through its paces!

JC: What was your first day back on the water like?

AS: It was a feeling of pure joy! I still remember the first run I did on my kit after the injury as if it was yesterday! Actually, it felt like I was starting windsurfing again, but the best part was that I already knew how to sail! I had a big smile on my face and just enjoyed sailing round in Pozo. Anyways, after a couple of days of free riding I got bored of not doing any moves and maybe this was the hardest part – to sail safely for such a long period of time and only increase the level very slowly week by week and month by month.

AS: Yes, now I don’t feel anything anymore. I still had some pain every now and then in flat or forced landings until May or June of 2019, but since then, I did not have any moments in which I thought maybe I would injure my leg again because of forcing it to much.

JC: 2020 seems like a fresh start for you with a new sponsor, Simmer; does it feel that way?

AS: Yes, it definitely is! It was time for a change and being part of the Simmer team feels amazing! I am feeling really loved and supported by every single person involved in Simmer and I am very grateful for this! I have always looked up to them as brand. I saw a lot of locals on Simmer gear here in Pozo since I was a kid and all of them talked about the performance and durability of the gear. I have always felt connected to this brand somehow. It feels great to help make decisions on equipment design and try to make the gear work even better. I think this will help me grow as a rider and as a gear developer. I like the responsibility.

JC: You headed to Cape Town this year on all new equipment, how did that work out?

AS: To be honest I felt so comfortable straight away on it! The sails have a big wind range and are really stable. The boards were completely amazing and made me improve even more my wave riding from the first moment I used them and all the accessories like masts, booms and extensions are top notch. 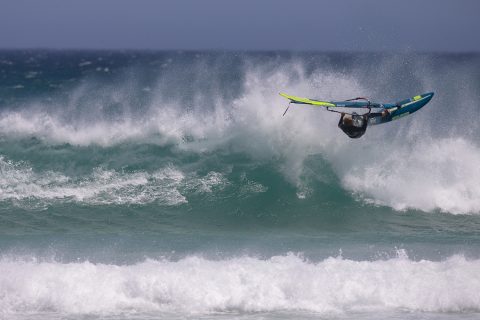 JC: Is there anything that is holding you back, or are you sailing full power now?

AS: No there is actually nothing to hold me back, in my mind or anything. I am feeling good on the water and not frightened or holding back on any moves.

JC: What combos of Simmer boards and sails are you using and why?

AS: I am using the Blacktip and the Flywave. I have always preferred soft and powerful sails that make me start planing early and with power, that is why I went for the 4-batten Blacktip. The Flywave is just such radical board in the waves and it still planes really well, so it is the perfect combo for radical wave riding and also for jumping. 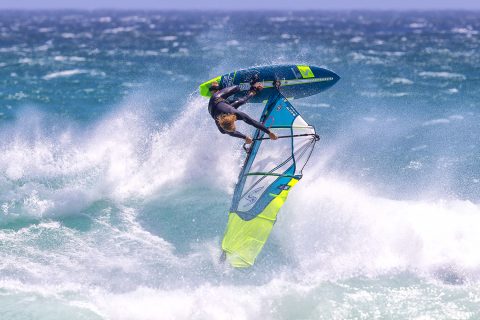 JC: How was your lockdown period?

AS: I was supposed to be in Maui this spring, but I had to skip it due to the lockdown. In Spain we were not allowed to go out of the house unless it was completely necessary, so sailing wasn’t possible, but I tried to stay fit and stretch at home, rewatch events of previous years and learn more about the judging criteria, as well as watching a lot of clips of myself and other riders. Besides that, I was just relaxing at home, watching Netflix and playing a bit of PlayStation.

JC: Why do you love windsurfing?

AS: Windsurfing is my passion; it is what makes me forget any problems I have in my life. I love to be out on the water and under the sun, and the rush and feeling of freedom while rotating through jumps and riding waves. I think it is the best sport in the world! 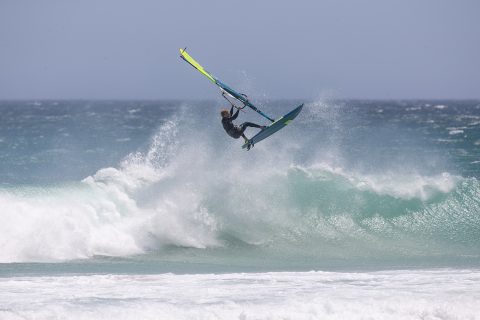 JC: What is you windsurfing ambition?

AS: I would be really happy if I manage to make podiums and to hopefully win Pozo in the future. I think everybody on the tour dreams of being world champion one day, even though we know it is really difficult and only a couple of us will be lucky enough to achieve it! But dreams never die I guess. Besides that, I also want to be remembered for having a nice style, a high level and for being a nice guy.

JC: If you were not a pro windsurfer, what would you be doing?

AS: I finished high school in a private bilingual school here in Gran Canaria, so if I wasn’t a pro sailor, I would probably be finishing university right now. I don’t know what I would have studied though, probably architecture or sports. One thing is for sure, even though I would not be a professional windsurfer, I still would windsurf a lot!

JC: Where do you see yourself in ten years’ time?

AS: I see myself still involved in the windsurfing industry and competing, hopefully at the highest level and finishing my career in a successful way.