From our September issue we look back at one of the few PWA events to take place in 2020 and hear the inside scoop on how two British girls cleaned up in Croatia! 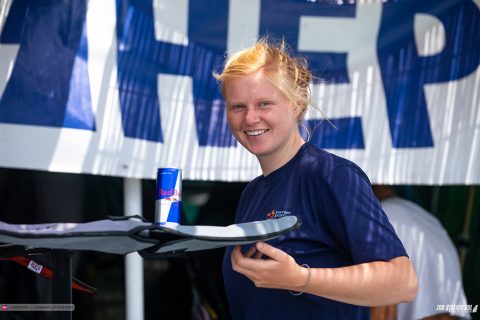 I spent my winter in Tarifa, Spain and Vilamoura, Portugal, enjoying a lot of intense training until Europe started to lockdown. For a short while it was a welcome break to be off the water, and it gave me time to finish off my van conversion. But by the end of the 2 months off I was desperate to get back to training.  As soon as travel was allowed again, I moved down to Weymouth living in my van to get a few weeks of foil training as it’s pretty risky launching and recovering a race foil on my local steep shingle south coast beaches. 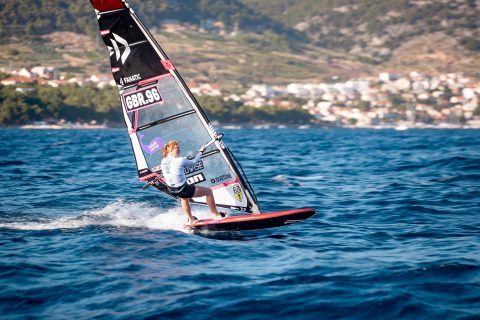 To be honest, as much as I was itching to go travelling again after what felt like such a long break, I was also really apprehensive. It was a bit of a shock when the PWA confirmed the event was going ahead and we (Alice, Simon Pettifer and myself) still chose to book everything as late as possible in case the event got cancelled or travel restrictions changed.

This made for a bit of a stressful process: 5 hours on the phone to the airline the day before travelling to book on the 17 windsurf bags (call centre only recommended calling if you’re traveling within 48 hours because they were so busy, but the day before was a Sunday!) and completing online forms to see if we would even be allowed into the country. Facemasks were obviously a must for travelling, so we bought a few different types not knowing which would be the most comfortable for the long journey. We found out that more important than comfort, was the ability to breathe when panting from carrying 17 kit bags around the airport and on and off ferries! At times the Covid-19 restrictions were strict, but at other times people seemed to forget about the basic principles of infection control. For example, on the plane we had to sign a form confirming we didn’t have Covid-19 symptoms and saying where we were staying so that our travel could be monitored, but ironically there were only 2 pens available to complete the forms that were passed around everyone on the three-quarter full plane. Luckily I brought my own pens! 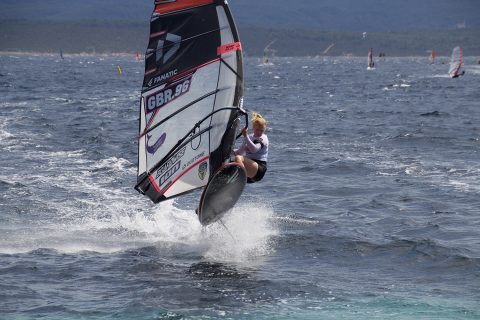 We decided to head to Croatia a week early. Toni and all the guys at Zoo Station Bol (the watersports centre at the event site) were super welcoming and even gave us a spot in the centre that we could leave our kit at and right on the beach, which turned out to be invaluable during the competition. It’s always useful to get used to the conditions before an event, but it was especially needed for me as, thanks to the awesome K66 UK team, I got to borrow a new

Duotone Warp_Foil 20.20 sail for the event, which was super helpful. I had never been on the Duotone foil sails before, so I thought I would have a lot to learn, but actually it was super easy straight out of the bag, just a few turns to loosen the new Duotone Hyper Cams for the lightest winds. We even got invited to a full day of race training with the Croatian team on a perfect 7.0 full power day, it was amazing. In our whole 2-week stay, there was only one day that we couldn’t get on the water. Most days it was glorious on 7.7 and 7.0 slalom gear, so about 15-25 knots. A couple of days we spent on the foil, but most of these days could have easily been on big slalom kit too. 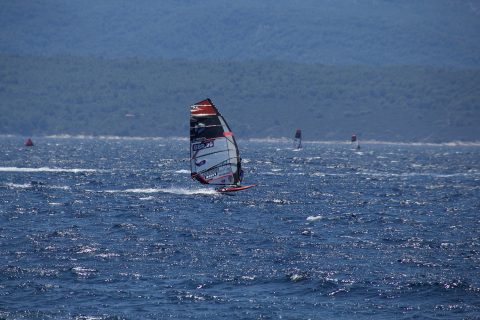 In an effort to get as many races in as possible, racing would start as soon as the thermal wind started building, which sometimes meant in the later eliminations foiling in 20 knots, which was tricky as I had only registered big gear! If we went straight to fin racing, the first few rounds the wind could be unsettled with some holes in the course. My choice was often to use my 7.7 Warp on my 130 litre Fanatic Falcon, rather than my preferred 115 litre, to make sure I was able to plane easily the whole time. It’s not always as fast, but it was definitely the safest option for me.

This was my first foil competition, so for me this was the hardest part of the week. Going into the event I didn’t know the level of the other girls except Alice, who I knew would be tough competition, so I was super happy to win. It was constant trial and error for me during the foil races, not knowing what kit to take in different winds, most days we knew the wind was going to pick up, but we didn’t know how soon or by how much. I had never practiced reaches so overpowered on the foil before, I did not know when and where was best to start on a foil, and learnt the hard way when to push and when not to. So naturally I made a few mistakes, some crashes and an over early. But at this event, what worked best for me racing on the foil was to pick the smaller sail. It allowed me to relax and think more about the racing tactics rather than just concentrating on keeping the foil in the water! I was also able to look around and see where the other racers were, which is important because you can’t hear them! My aim for the rest of the year is to try and get more practice racing the foil at UK events and hopefully be back on the race course for the PWA in 2021! 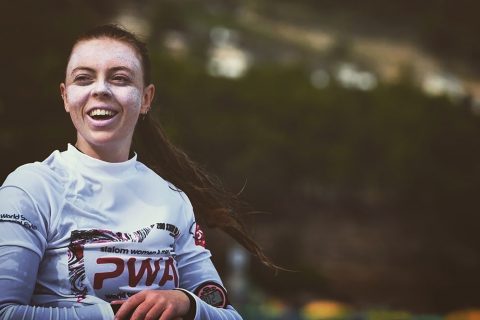 I am 22, from the village of Farmoor outside Oxford. I grew up learning to windsurf on Farmoor reservoir and on holidays abroad, but have made a recent move to Portland, where I now live so I am able to train more.

I spent the winter training in Tarifa and Portugal before the lockdown in the UK with a group of UK windsurfers including Jenna. It was fun to learn how to foil during the winter with a great support network and brilliant coaches. In the last week of our training in Portugal we learnt of the virus and immediately travelled home before we got stuck! I then spent the period of lockdown at home with my family in Oxford, where I kept my fitness up by running and doing some circuits in the garden. When we were allowed to travel again for sport, I went down to Portland and trained with Jenna again before leaving for Croatia. 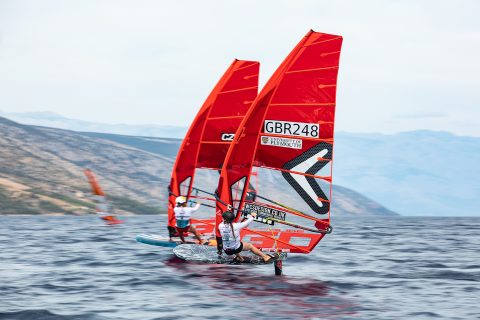 The travel To Croatia was interesting as we (Simon, Jenna and I) had 17 oversized bags! Our flight was very early in the morning, but once in the airport we were able to check in the bags fairly easily and we had just enough time to get to the departure gate. The airport was surprisingly busy, but we wore masks and were able to keep socially distant. When we arrived, we were picked up for our transfer to the ferry that took us to the island of Brač. We were then kindly picked up by the owner of the Zoo Station Bol centre and arrived at the event site by late afternoon. 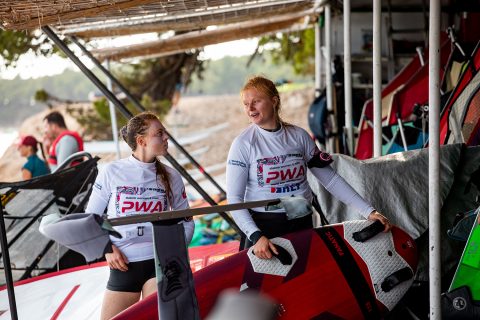 Jenna and Alice in the pits!

The day we arrived, it was actually raining and cloudy as the ‘Bora’ wind was blowing, but every day after that the weather was hot, and the daily thermal ‘Maestral’ wind came in in the afternoon. The venue was beautiful with warm water and a slight swell, and the centre was really welcoming, helping wherever they could. The area felt very safe and the locals were really friendly. It was great to finally compete again and race against the girls from other countries. We raced every day, except for the final day, with a maximum of 5 races a day. I was consistent in the slalom discipline at the beginning of the week, achieving 2nds and 3rds each day, however this was the first time that I had been top 3 at an international event and I think this affected me because as the week went on I felt nervous and lost concentration, leaving me with inconsistent results. I managed to fight and achieve 3rd overall, which I am very happy with and I know how I can improve for my next event. I used either my 7.8 or 7.0 with my 113 litre Fanatic Falcon (which is 8 years old!). I had worked hard to improve my gybes before the event, so when I fell in on the first mark in one of the races and caused a pile up of pretty much all the girls behind, I found it funny to watch back on the drone footage. In the foil discipline I used the new iQFoil race foil, but with an 800 cm2 front wing for less drag, and the IQFoil women’s sail, the Severne HyperGlide Olympic 8.0 m2. 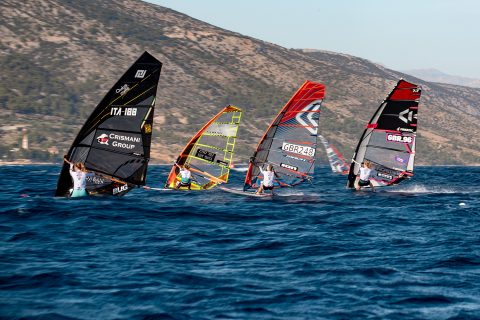 I was leading the event throughout the week in 1st place and having great battles with Jenna, however I had a costly big crash (also caught on the drone!) in the final race, and my overall position was 2nd in the end. I tried to start most of my races at the pin end, so that my reach to the first mark was more manageable, however a couple of times I missed that the line was biased at the boat and some of the girls started ahead, but I was confident in my speed and I worked hard and moved ahead. It was amazing to be on the podium and conclude a week of hard work with good results. I am now back to training hard on the water in Portland and look forward to the next competitions!