Log In
02/08/2022
by John Carter
Category
Tags: THE IQFOIL YOUTH AND JUNIOR INTERNATIONAL GAMES
Tweet
THE IQFOIL YOUTH AND JUNIOR INTERNATIONAL GAMES
The iQFoil Youth and Junior International Games have kicked off in Lake Garda. Check out the official report below:
The iQFoil Youth & Junior International Games, the third stage (after Cadiz and Campione) of this international circuit of the new Olympic class, organised on this occasion for the youth (under 19) and junior (under 17) categories by the Circolo Surf Torbole in collaboration with the international class and the Italian Sailing Federation, began on Sunday 31 July in Torbole, on Garda Trentino-Italy, with record numbers. Participation was therefore very high with 161 athletes from around thirty nations, including Australia, Argentina, Mexico, Singapore, and Peru. 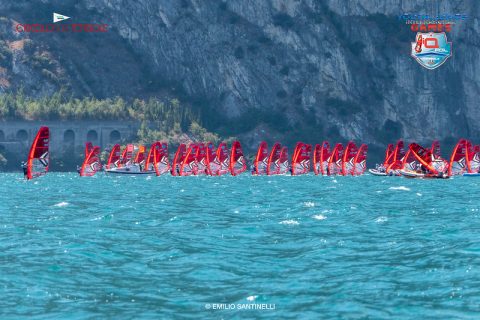 On Sunday afternoon, the first day of the qualifying races, there were very light southerly wind conditions on Garda Trentino, which led the Race Committee to opt for the slalom races, which ended for the junior men’s and women’s categories with three races, for the youth men only one race and nothing at all for the women in the same category. In the evening there was the official presentation of the teams with the opening ceremony on the stage of the Circolo Surf Torbole. On Monday, the second day was a very intense one with racing both in the morning at 8:00 am with the wind from the north, and in the early afternoon, using all the wind possible, this time from the south. The major under-19 category started with both males and females completing 5 course races in the morning in 15-18 knots of wind, while the juniors took to the water in the early afternoon, racing 4 course races, giving way then to the youths, who concluded this long second day with a slalom, both male and female. 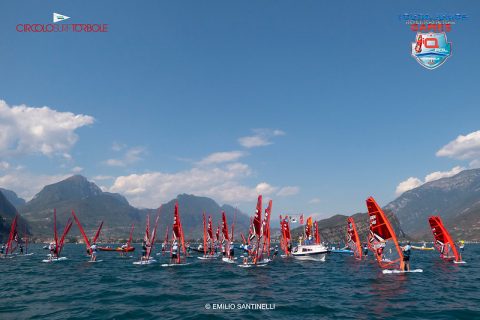 And here we come to the rankings, which in the youth category for both men and women are in favour of the Italians and in particular of the home athletes from Circolo Surf Torbole: Manolo Modena with 4 firsts as best partial is in the lead ahead of the two Britons Dixon Charlie and Duncan Monaghan; a good sixth for Jacopo Gavioli. Among the under-19 women in the lead is Sofia Renna, who with 4 firsts and a third already has a 7-point lead over Czech Pinosova and Israeli Millo. In the provisional top ten eighth place for Carola Colasanto (Tognazzi Marine Village). In the under 17 junior category it is the Israeli Adiran who leads the fleet, ahead of the French Nicolle and the Dutch Brüll respectively. Fourth, but first of the under-15s, is Circolo Surf Torbole’s Valentino Blewett. Among the girls, Spain is the leader with Caterina Tomas Cardell protagonist of four firsts, a fourth and a discarded disqualification; followed by the Italian Francesca Maria Salerno; third the Czech Lojinova; first under 15, fifth overall, the Israeli Partouche. 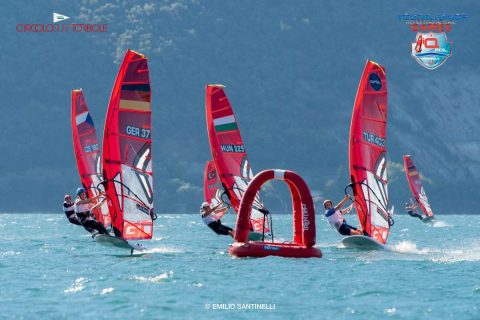 On Tuesday, the third day of competition, the programme will start at 1pm, counting on a southerly wind.
https://iqgamesyjtorbole.sailti.com/en/default/races/race-resultsall