Windsurf MagazineAFFAIRS OF THE HART | FIGHTING THE RUINATION OF MAGHEROARTY

Harty reflects on the potential ruination of one of the world’s best windsurfing spots and home to the Red Bull Storm Chase – Magheroarty, County Donegal, Ireland – and what you can do to help save it.
Main photo – Harty’s Masterclassees signing the ‘Save Ballyness’ petition.

How you approach windsurfing is often a reflection of personality.  The driven strive endlessly for the next level. The fastidious tweak, polish and keep diaries. The stressed use it as a healthy conduit for their obsessions. One very (on the surface) mild mannered guy I know, develops aqua Tourettes at the slightest mishap. You’ve never heard such a profane, and yet poetic, stream. Gurgling away in mid waterstart, he swears like the French – starting mild and then linking ever more abusive phrases into a shatteringly foul crescendo. He says his wife doesn’t like swearing – but he finds it strangely soothing, so windsurfing allows him to indulge in his eccentric hobby away from the house. He claims he’s not really angry; he just likes to get it out and thought the noise of the wind and waves would cover it  up – but apparently not.

More recently someone said what he especially treasures is the sense of permanence and familiarity offered by his sailing spot. He says that hourly we are bombarded by such relentlessly catastrophic news (because bad news sells) that you’re made to wonder if there’ll be a world by the end of the week – no wonder people’s anxiety levels are through the roof.  So whenever he gets back, light or strong wind, he goes straight to his local spot, gets out there, looks around – and when he sees everything is as it was when he left it, he breathes the fresh air and say: “no – it’s OK, it’s all a load of bollocks. The things that matter haven’t changed. Everything is fine!” I absolutely get that. I have my own touchstones at home and abroad. I enjoy travelling to familiar sailing spots. It’s like reconnecting with an old friend. A year away from Mauritius, I’ll sail out to the Manawa reef and immediately recognise the wave and its cheeky foibles – how it walls up gradually to look much meaner than it really is, how it peels slowly – but then how just as you’re about to enter the channel and congratulate yourself on a heroic ride, it spits out and swipes at you like a vengeful cat. I’d hate that to change.

But for me, the best place to gain some perspective and reset anxiety levels is Donegal. The secret of Donegal windsurfing has been leaking out gradually over the years, but this year was made public by the Red Bull Storm Chase event. The images of Jaeger Stone and the band wiping hail stones from their eyes and launching 40 foot into grey, pounding breakers weren’t exactly the ones the local tourist board would have chosen – but most understood that it’s not always like that.

To say it’s the place which time forgot is a bit patronising. There’s a thriving, vibrant rural community. But apart from a scattering of new bungalows on the hillsides, in the 30 years I’ve been going there, it has remained gloriously unravaged by ‘progress’ –saved by its geography, remoteness and caring locals. Cresting the hill that overlooks the beach of  Magheroarty, the vista of the half moon beach, grassy dunes and lagoon behind, is so stunning that you can’t quite believe what you’re seeing.  Like a stunning masterpiece, why would anyone want to damage it? 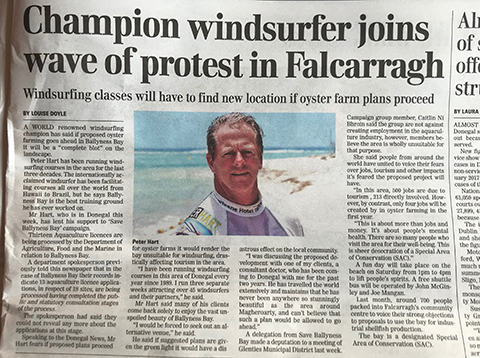 Sick Oysters
When you hear that your favourite sailing spot is likely to be ruined by developers, your first thought is a hotel complex, a marina or yachtsmen’s elite apartments. It would take  you a long time to come up with herpes as a likely cause. It appears that the French oyster population has been ravaged by herpes. Oysters may be just salty snot to me and you – but they’re such a crucial part of the French culture and diet (as well as a cure for failing libidos) that they need an alternative source – and it appears that parts of the Donegal coast are perfect for the job. Hence a proposal has been submitted to turn Ballyness Bay, the beautiful high tide lagoon behind Magheroarty beach, into a massive oyster farm. It appears also that the process of granting licences was well under way before locals got wind of it. But they’re a relaxed bunch and surely wouldn’t mind? Well the will of the people was under-estimated. The ‘Save Ballyness Bay’ pressure group is made of hundreds of outraged locals who rightly claim the beauty of their locale is key to their mental health and heritage. The county’s major income comes from tourism and it’s beautiful North Atlantic coast. Oh yes – and then there’s the windsurfing. In some places our sport is suffered (a lot of vans parking badly and blocking the view) but here it is wholly embraced. The Loch Altan Hotel, from where I run my clinics, has seen a huge upturn in off season occupancy which naturally filters down to pubs and shops.

So before I know it I’ve been warmly kidnapped to help spearhead the movement and get local media coverage. The feeling with such eco movements is that the powers that be nod their heads in false agreement and sympathy, claim that they will take the concerns into consideration but in the knowledge that the deed is done with no doubt some interested parties making a tidy buck. But we misjudge the power of sport at our peril.

The Power of sport
Some 15 years ago in Gran Canaria there was a proposal to extend a harbour which would effectively ruin the waves at Mosca Point, one of the best waves on the east coast. It was thanks to demonstrations by surfers and windsurfers, led by Bjorn Dunkerbeck and the Moreno twins, that the project was abandoned.

It transpired the extension wasn’t really necessary and that some people were just going to benefit from a juicy EU grant. There’s progress and progress and sometimes we have to accept that certain concerns trump the needs of the adventurous windsurfer. The massive wind farms around such places as Tarifa and England’s east coast suck up some of our much needed energy, but if they reduce the global carbon content then hopefully windsurfers will support them gladly and just rig 0.5 m2 bigger. If the proposed oyster farms (the equivalent of 70 football pitches) in Ballyness Bay, one of the most beautiful freeride training spots in the world, were to be the financial saviour of a desperate local community, then you might have some sympathy. But they will create just 4 local jobs. Windsurfers of the world unite!
If you want to get involved with donations or the online petition – check  out  www.saveballynessbay.com or follow them on facebook – https://www.facebook.com/saveballynessbay/ ).
Peter Hart – 8th October 2019