Known as Ulster’s inland sea, Lough Neagh is the largest freshwater lake in the UK and Ireland, Finn Mullen tells more about its history and windsurfing.

Next time Northern Ireland is on the news, and a map flashes up on screen, have a look at the large body of water in the middle, that’s Lough Neagh! Whilst little known, it is actually the largest lake in the British Isles. In terms of famous windsurfing lakes, it’s bigger than Lake Garda and whilst the winds are certainly not as consistent as Garda, a good day can whip up streaks of wind blown waves across the lake for multiple rides and jumps in one run. Think of freshwater windsurfing and most people imagine a small lake with a few ducks and non-planing conditions, but a lake on the scale of Lough Neagh has its advantages, no tide, no current and unobstructed wind across its long, flat and slightly higher than sea level shores!

SIZE
In terms of numbers, Lough Neagh, or as locals call it simply, ‘The Lough’, is 30.5 km on its longest length (SW-NE), has a maximum width of 12.1 km (W-E), a length of shoreline approximately 125 km and measures over 300 square km’s. It contains over 800 billion gallons of water, but with an average depth of only nine metres and maximum depth of 34 metres, it is relatively shallow, certainly compared to Loch Ness in Scotland at 230 metres deep. The shallow waters do mean lots of bumps for windsurfing though, even if there are no deep dwelling monsters! 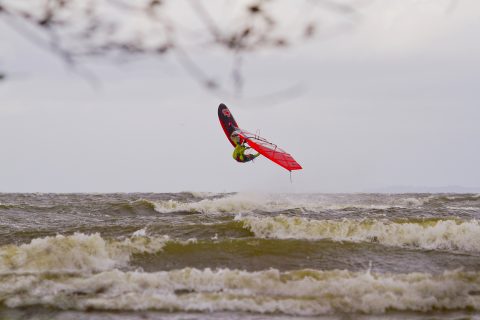 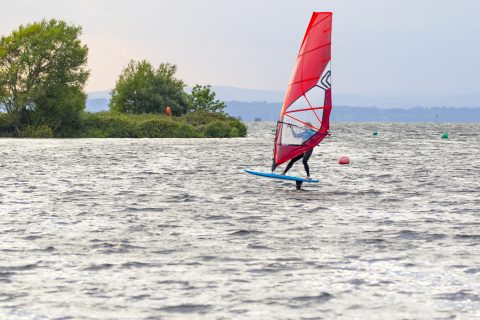 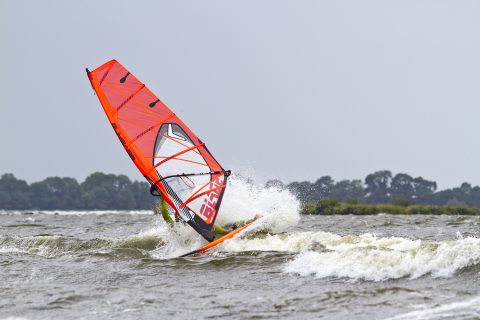 ORIGINS
Lough Neagh does have plenty of myths and legends, the most famous being that the Lough was created when the giant Finn MacCool was chasing a Scottish giant across Ulster when he picked up a large piece of ground and hurled it at the giant. It overshot and fell into the Irish Sea forming the Isle of Man, while the massive crater left behind filled with water and formed Lough Neagh. The other two main myths tell of wells overflowing which flood the lands and some tales tell of a drowned city beneath its waters! The more boring scientific version is the lough was formed in the early Tertiary period, approximately 65 million years ago, when a fault line occurred and an area of land sunk, thus forming a basin that filled with water and created Lough Neagh.

GEOGRAPHY
Approximately 20 miles west of Belfast, the almost rectangular shape of Lough Neagh dominates mid-Ulster and five of Northern Ireland’s six counties border onto the lough. The lough’s vast size is fed by 6 rivers, including Northern Ireland’s largest, the Bann, which also flows out of the lough to the Atlantic at Portstewart on the north coast. Such an abundant source of water is used to supply 40% of Northern Ireland’s drinking water, and also as an outfall for treated sewage, quite a disconcerting loop!

The lough itself used to be much bigger, but damage to surrounding lands from flooding events caused its levels to be lowered 4 times, the first in 1846 and the last in 1959, and the water levels are now managed by large flood gates at Toome on its north shore. Around the lough you can still see in some parts its old banks set back from the shore.

HISTORY
It is thought Lough Neagh first became inhabited around 9000 years ago, with some archaeologists believing it was where some of the very first settlers in Ireland lived, attracted by an abundant supply of fish and hunting grounds surrounding it. Today evidence of its history can still be seen in the form of ancient sites and ruins such as the Ardboe Cross, which is over 1000 years old. More modern history of the lough can be seen in Antrim where the remains of a torpedo testing facility from the Second World War are just offshore. During the war there were no fewer than seven military air bases around the lough, with the United States Air Force even basing flying boats on its shores.

Lough Neagh has a wide variety of habitats and as such supports an abundance of nature and parts of it are deemed “Areas of Special Scientific Interest”. The area carries bird populations of international importance and has one of the largest eel fisheries in western Europe. Lough Neagh eels whilst having little domestic market, have a lucrative export market, where they are considered a delicacy in Holland and Germany for example. The eels have a remarkable journey to the lough, spawning in the Sargasso Sea in the Caribbean before making their way to the lough via its entrance to the Atlantic down the lower River Bann. Oxford Island Nature Reserve on the southern shore of the lough is home to a series of nature trails and bird hides as well as an information centre, the Lough Neagh Discovery Centre, which is conveniently located beside the windsurfing launch site.

CULTURE
“The lough will claim a victim every year.
It has virtue that hardens wood to stone.
There is a town sunk beneath its water.
It is the scar left by the Isle of Man.”
Seamus Heaney – A Lough Neagh Sequence.

Nobel winning poet Seamus Heaney grew up close to the shores of Lough Neagh and much of his work captures the rural life surrounding the lough and in 1969 he produced a collection of poems, “A Lough Neagh Sequence”, dedicated to the Lough Neagh eel fishermen and their catch.

In more recent times, Toome at the north end of the lough was used as a setting in Game of Thrones and portrayed as the “Smoking Sea”, at a part of the lough’s shore where the trees twist strangely in errie G.O.T. fashion! SAILING
Although the lough has a vast shoreline, much of it is privately owned with little access, thus windsurfing mostly takes place at the well developed sites of Oxford Island on the south shore, Antrim on the northeast shore and Ballyronan on the northwest shore. Each of these locations has amenities on site including camping and nearby shops, albeit no windsurfing shops so bring your own spares! Antrim and Oxford Island being closest to large population centres have the greatest number of active windsurfers, though this is normally single figures even on a good day, so no need to worry about crowds!

The best conditions at each of these spots are onshore winds for waves and cross -shore for blasting and bump and jump. When the wind is up on the lough, you are dealing with conditions best suited to wave or freestyle wave boards, with a board that is fast and easy to control, a job well suited to modern multi-fin designs. One point to note is that all round the lough is relatively shallow close to shore. Most major shallows are marked in the normal way, but it’s worth getting a local to point out the clear areas if possible. When surf is breaking the shallows to be avoided become more obvious with small, closely spaced dumping waves on them, as opposed to the more gentle breakers of the deeper areas. Freshwater obviously has less buoyancy than the sea so in general you would use a slightly larger board to compensate, but with no current or rips to hinder planing, there is some benefits too. In lighter winds the lough offers idyllic flat water blasting, though don’t get too carried away with all that space on offer as it is easy to end up a long way from shore and the rule of less buoyancy with freshwater applies equally to humans as to boards, as anyone who has had to swim in Lough Neagh will attest to the challenges. Heaney’s haunting words are not without reason and if you do get into trouble then help is available via Lough Neagh Rescue, an independent lifeboat service and charity who have three lifeboat stations across the Lough at Oxford Island, Antrim and Ardboe on the mid-west shore and can be tasked via HM Coastguard in the normal manner by calling 999.

The vast natural importance and rich history of Lough Neagh could fill many pages and I have only provided a very brief summary here. Like many spots on our shores, it is not a glamorous tropical location, but sailing in such a tranquil place has its own reward, not least for its quiet countryside surroundings, far reaching mountain views and its unique place as the king of the lakes by size in the UK and Ireland! !