AFS offers for this new year, a complete redesign of products that can be summarized in three words: performance, reliability and feel. 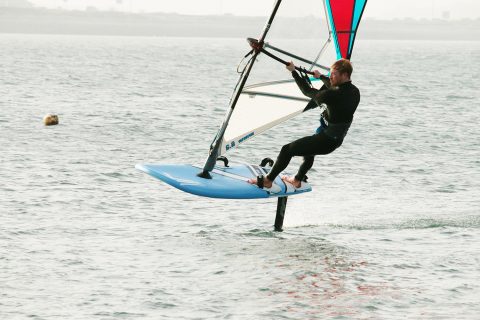 Alien Foiling System (AFS) is AHD’s collaborative foil-specific partner, founded in 2009 and feeding their early-adopting native French market, and beyond, ever since. Exclusively producing complete carbon setups, they were certainly amongst the early pioneers for wind foiling, supplying wonderfully crafted foils that felt both hand-custom finished, and cutting edge at the same time. The market has moved on and directions of travel redefined, so it’s encouraging to witness AFS being true to their roots and presenting this new wind foil range for the 2022 season.

The mast was pinned and bonded with the fuselage to make a rigid T-bar in the model we tested, although there’s news of dismountable parts coming, with a “reinforced assembly” and the use of high modulus carbon to “allow a perfect transmission of efforts and sensations.” It also makes it possible for the introduction of a 105cm fuselage, forecast to be due mid-April. And whilst both the current front wings have been supplied for test, there are two additional sizes in the pipeline – a tiny 370 and mid-range 700 (all of which are compatible with past generation AFS fuses). Supplied with a bag and T30 screwdriver, the AFS is straightforward to assemble in its current form, using M6 screws to fix the wings to the fuselage – three for the front wing; two for the stab. Fixing the Deep Tuttle head into the board was uncomplicated too, the foil tested predominantly in the AHD Compact 83 (142 litre) supplied. 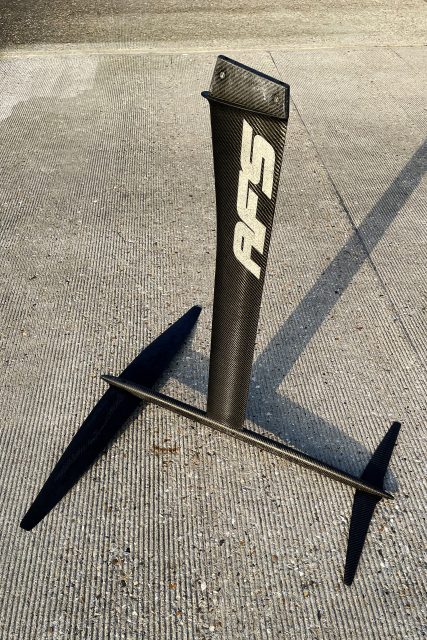 Using the 900 front wing initially, it is certainly powerful, generating plenty of low-end lift. All AFS new wings are designed and developed by the UK’s own Kevin Ellway – whose experience in the world of foiling is second to none. The 900 front wing itself has a new profile, similar to that seen on the foils of an America’s Cup yacht, intended for increased glide whilst reducing drag. And it works well! The initial get-go takes more input from the rider than many ‘freeride-oriented’ foils reviewed here – this AFS is undoubtedly more freerace focussed … and more. Turning off the wind at the right time; good pumping technique or ploughing power into the board to help unstick it from the water, it soon gets the idea. Once flying, it is certainly within the realms of the ambitious novice foiler. It feels supremely balanced and stable, its ride-height easily maintained and governed by the rider. The AFS is also fast, capable of pointing high or going deep, but more importantly for the recreational sailor, comfortable on a reach too. It does encourage a committed foil-specific stance, leaning forward over the front foot, the extra 10cm of mast length a welcomed asset as you’re encouraged to push harder to explore its potential.

As the wind increased, we swapped the 900 out for the smaller 570, with its more linear profile. It compliments the larger wing admirably, reigniting the setup with an extra gear and even more high-end performance. Used with the 240 tail wing supplied, we felt it topping out at around 30 knots, giving it more than enough juice to compete at national level. Our resident pro (and National Slalom Champion) even used it to win during a few local training sessions. A smaller tail wing will undoubtedly unlock even more potential (and, as luck would have it, we have it confirmed that a new 200 stabilizer is now available, also designed by Ellway). We also noticed, when cantered over and pushing hard, that the 240 tail wing would slip out a little, particularly on a reach, requiring a more subtle and deft touch to maintain balance. This was particularly noticeable using the 570 on the 83 Compact, where the 200 is said be a better fit.

It’s in the gybe though, that the AFS foil had us coming back for more, time and again. Whether the 900 or 570 front is installed, the AFS’s carving angle can be played with and altered at will, midway through the transition. Whereas other foils have a fixed, prescribed carving angle, the AFS demands commitment, yet provides feel and response in return. It’s a great asset to have, particularly during tight spots, the rider able to drive forcefully off the backfoot without varying the ride height. This wind foil specific platform is a real step forward for AFS and with more developments in the future, it’s bang up to date for the modern windsurfing enthusiast.

OTHER FOILS IN THIS TEST