Earlier this year Pozo ripper Alessio Stillrich suffered a horrific injury whilst training in Cape Town, South Africa. Now on the mend, Alessio reflects on the fateful day and his recovery so far.

The 20th of January 2018 is a day I will never ever forget! At about 9 in the morning I got to the beach and conditions were firing at Cape Point on the southeastern tip of the Cape Peninsula, near Cape Town. It was mast high waves and really gusty offshore wind for 4.0 sails. I rode a couple of waves and enjoyed them a lot as I had some nice turns and big aerials. Suddenly, I saw this perfect big lip. As I had made some normal aerials I decided to change it up a bit and tweak one. This wasn’t the best decision I’ve made as I lost control while tweaking it. It felt like a strange wind gust span me around into a really weird vertical goiter or air taka. In the air I tried to get rid of the gear, but unfortunately I couldn’t get my front foot out of the footstrap. As soon as I fell into the water with the wave I knew that I had broke something but not what exactly. I looked at my leg and saw it was just hanging around without any support. Once I knew how serious it was, I started to feel the pain and panic immediately! The first thing I did was to check the distance to the beach, but after seeing how far out I was I knew it would be quite hard to get ashore. I remembered that Klaas was also out though and luckily he was just a couple of waves behind. I screamed like crazy and he heard me. We got washed several times and after a while I was finally able to grab his back footstrap so he could tow me back to the beach. There were a lot of people helping me out of the water and stabilizing my leg with pieces of wood and tape and searching for mobile signal so that they could call the ambulance. They carried me up to the little parking spot on my windsurfing board through the really nasty and ‘needly’ path; sorry to everybody for causing you a lot of scratches on your feet! Everything was so intense and painful! So many things went round my head, from screaming I would never sail again to praying I would make it back in time for the first tour stop in Pozo Izquierdo. Also the pain was just absolutely terrible, I never thought a human could feel so much pain. After about two hours the ambulance arrived and finally brought me to the hospital. Thanks to my boss Craig Gertenbach and Klaas Voget for finding an excellent doctor so fast! 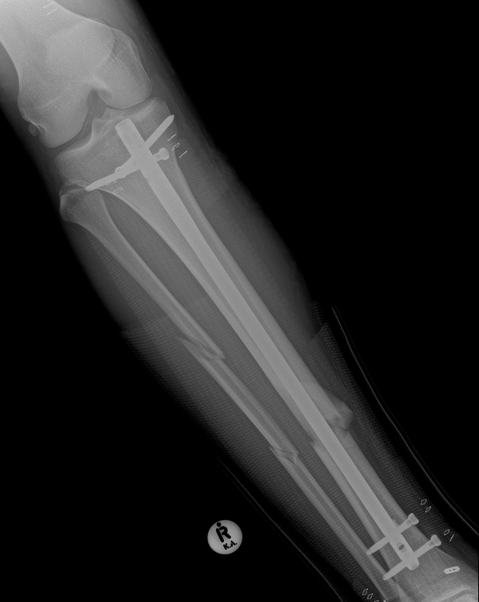 SURGERY
The next day I got surgery and it turned out brilliant. I showed my X-rays to several doctors from different countries and all of them confirmed that the operation could not have been done better. This was a very important first step into the right direction and it also made me feel a little bit more relaxed. I had to stay in the hospital for nearly a week as the pain all over the leg was terrible, from knee to ankle. All the painkillers and medication made me sleep a lot and suffer a bit less, so I was actually happy to be able to be in the hospital. The first days back in Cape Town on the sofa in the house I was staying in were quite hard as I had also broke a little but very important ligament called the Syndesmosis, so I was not allowed to move and put weight on my ankle for two months. But from the first day I had to move my knee while lying down to reduce the swelling, recover the mobility and to strengthen the muscles as I saw how my quadriceps lost shape day by day. Standing up and walking on the crutches was also a mission as I felt the blood pumping up and down in my swollen leg. This was a terrible feeling! I tried to stand up as little as possible. Honestly, I also really wanted to go back home, but this was not possible until 3 weeks after the accident as I still wasn’t able to bend my knee for sitting down in the seats of the plane. The whole leg was also super swollen, so travelling like that would not have been the best either. Finally on the 8th of February I was able to fly and it felt good to at least be back home again. After twenty hours of travelling without being able to place my leg horizontal it was so compressed that I did not feel my toes anymore. I was actually quite scared that I would lose them! The next day the world looked better and I could start to think about the recovery process and being surrounded by my mum and girlfriend. 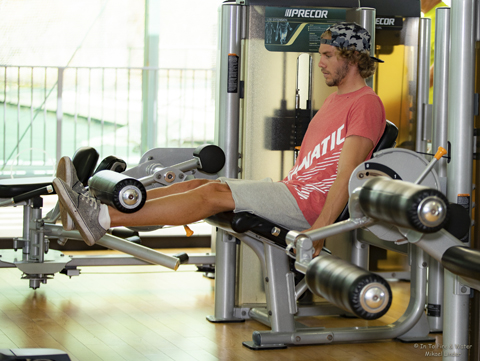 REHAB
One month after the injury I was allowed to slowly start with rehabilitation. I still had a lot of pain caused by two screws rubbing on tendons and ligaments of my knee. Besides daily physiotherapy treatments I started with light pool work and riding a static bike to improve the mobility of my knee and ankle. As the muscle strength started to improve day by day I got more motivation. After doing this for about two or three weeks I also could start doing walking exercises in chest high water and to use machines in the gym with very light weights. I could now walk for a longer time in the pool and in shallower water until I finally was allowed to start walking and stepping on both feet two months after my injury. I was so afraid the first time I stood on both feet again, but at the same time it felt amazing! The pain was still there, but every day a bit less. By the middle of April I was able to walk nearly normally again, no more crutches and no more limping. From this moment onwards I could push even more in the gym. I could finally do some exercises with my body weight like a lot of different types of squats and balance exercises (my balance on the right foot was completely gone). With all this I improved my strength and I started to feel better and better.

WATER TIME
At the end of May my doctor removed two small screws from my ankle. Now I was finally allowed to start sailing a little bit once the wounds healed. Two weeks later I had my first session and I remember it felt incredible to stand on the board again and to plane around in my home spot even though I could not do any moves. I will never forget the feeling of that first run! Nevertheless I struggled a lot to take it easy; to not do any cutbacks or jumps was really difficult because I felt really good. Now it was time to get my muscles and ligaments used to windsurfing again and to increase the intensity very slowly and step by step.

More or less by the middle of June I started to wave ride a bit. It was incredible to make some turns and to feel that I would definitely be able to windsurf professionally again with patience and time. I even made some takas and aerials every now and then when I felt safe and knew that I would not crack or twist my foot. So as to not risk anything stupid I thought I better wait for another two months and just sail in lighter winds and not so wavy days. Once the end of August came the wind started to drop to 4.0 or 4.2 sail sizes – light for Pozo! I also had an appointment with my doctor around this time and he told me that my bones had finally grown together again. The screws and the nail did not have to support my whole body weight anymore. The bones were doing their job again. He also said that I was now allowed to do more impact exercises and I could even slowly start to make some chop hops and small jumps so that my bones, muscles and ligaments could get used to the impacts again. At the end of October the two troublesome screws next to my knee were removed! The last and very important part left is to remove the big nail out of my tibia. After several experts discussing about removing it or not, we came to the conclusion that the best thing to do is to take it out as the not very probable but still possible risk of having the same accident again would mean the nail could bend or even break and this would be tricky to get out of the broken bone. I am looking forward so much to finally be back in training and competition mode in 2019! It has been a really hard time, but I think from every negative thing you learn something. It made me physically and mentally even stronger than before and this is the positive I can take out of all of this!