From our March 2020 issue we hear about how the fastest windsurfer in the world, Antoine Albeau, has teamed up with fellow Frenchman Marc Amerigo, an engineer and entrepreneur who has a history of helping set snowboard and mountain bike speed records. The duo are on a mission to disrupt the sailing world and break the windsurfing speed record by using technology to create an enhanced windsurfing system with ‘The Zephir Project’. A lot of it is top-secret stuff for obvious reasons, but they give us an insight into the project and some of its findings so far!

Mark Amerigo – “With Zephir Project, the goal is to revolutionize the world of speed on the water by exploring “augmented windsurfing”. Our performance objective is to see windsurfing holding again the prestigious absolute sailing speed world record, which today is 65.45 knots set by a boat, Vesta Sailrocket II. We want a return to the days when windsurfing was the fastest, like Antoine did in 2008 with 49.09 knots. 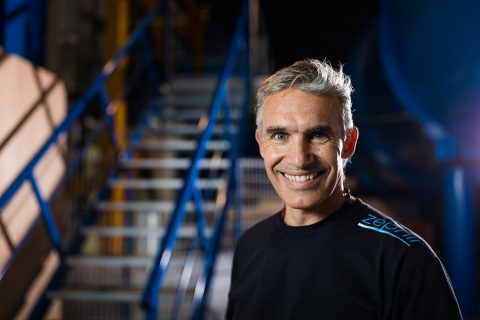 To do this, we choose to put the human being at the heart of this technology disruption, and it is inspiring a new balance between technology and the natural elements. The boats took over speed records from windsurfing boards when the principle of displacement was completely revised by Yellow Pages and then the Vesta Sailrockets. These boats have an almost unlimited power and new principles of support on the surface of the water.

All the difficulty of our project is to optimize the power resource linked to the rider, it is part of the ‘structure’ and is necessarily limited. Everything must be optimized, with the goal of creating a ‘man-machine’ system almost as efficient as a bird in the elements. That’s the dream that we want to see come true.

Antoine has such a long experience of high-level speed sailing. He’s been 25 times world champion and holder of several word records. He is also currently the fastest windsurfer on the planet with 53.27 knots. We have a great human connection as well and this is key for the future. We have a lot of fun working together actually! Some 80 people and 50 companies joined us and are involved today around the globe from many different fields. The energy is really good. I feel Antoine is the perfect candidate for such a mind-blowing challenge. 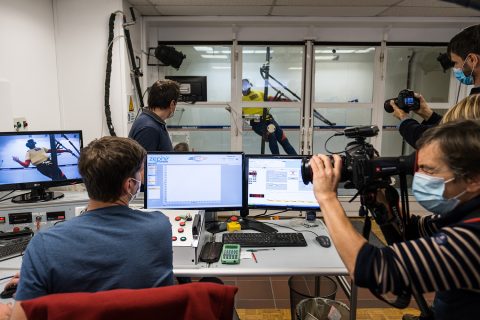 It’s about leading in parallel the development of new, more efficient rigs to gain power and also working on the aerodynamics of the rider, which really becomes a critical parameter at very high speed. At the same time, this engine must have a very limited drag in the water, which implies a significant improvement of the current appendages.

Another major difficulty is the mix of the natural elements: underwater, in the air and at the interface, which generates big interaction problems such as ventilation or cavitation at very high speed.

But beyond these unavoidable performance parameters, at very high speed, stability also becomes extremely critical. For example, we are currently experiencing it on our wind foil boards when we push speed. We can see the same on the America’s Cup boats. Martin Fischer, co-designer of Luna Rossa in Auckland and part of our Zephir core team, tells us that they really push crews to an extreme level of precision to stabilize the flights. 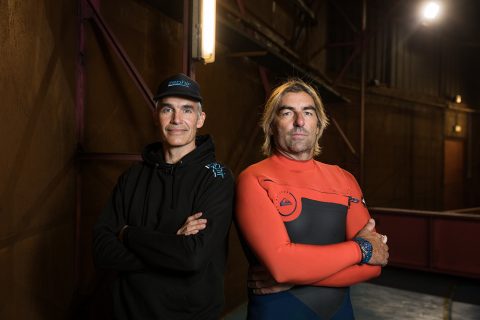 In our case, stability is going to require a real coordinated operation of the rider and his equipment and forms of onboard assistance. In our vision, as with other speed records in extreme sports, it’s about going faster, but with more stability and safety. Thanks to the alliance of technology and humans, it is not a question of beating records in ‘kamikaze’ mode, but with efficiency, smoothness and intelligence. It’s about being able to make one with the elements of nature. Making high speed accessible to intermediate level riders will also be part of the process.

Now that the project is launched and shows all its potential and dimensions, we are looking for solid sponsors to help us financially. We plan to build our first protypes in the next three months, and money is now a key milestone of the adventure. We are now ready and fully open to discuss partnerships.

We have a partnership and friendship with Principe Baldini, who is in charge of the speed events in La Palme on the Mediterranean coast. Antoine knows the spot very well and it is perfectly adapted to our needs. Sailing fast in open sea is what we aim for and the spot is a magical place for the 500 metre and nautical mile runs. 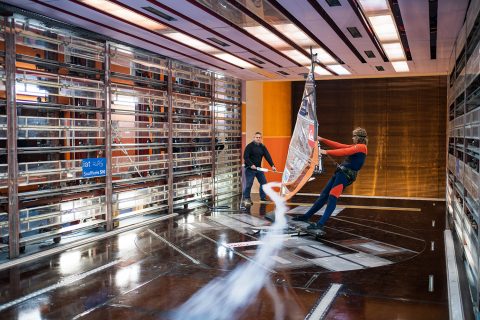 On December 7th and 8th, the team continued to explore at the Aero Technical Institute (IAT) wind tunnels near Paris. Antoine tested in those wind tunnels the windsurfing equipment he used during his word speed records. Using digital technologies from the film industry, the team captured data on positioning for the pilot and the windsurfing system. We also tested the prototype wing engineered at Centrale Lyon 30 years ago. Various concept sails and wings engineered by Robert Stroj (Neil Pryde designer) were tested by Antoine as well. 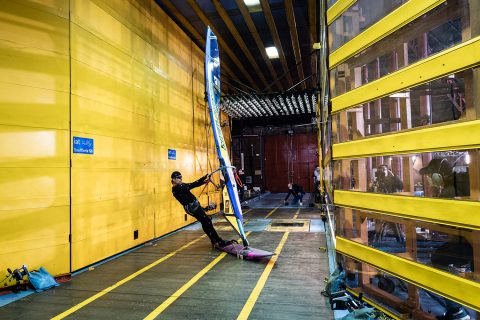 Testing in the wind tunnel

The analysis of the existing material in the wind tunnel by our best experts allows us to better understand the aerodynamic phenomena, and to explain the historical design choices based mainly on empirical development (prototypes, rider tests and feedback). The equipment is very advanced in its current form, but insufficient for very high-speed performance. At the same time, work was done to design a specific suit for Antoine, a kind of wingsuit for better air penetration. I must say that our wind tunnel tests have shown that the subject itself of the rider is particularly complex!

Observations and measurements allow us to really lay the foundations for new rig designs. Based on several pre-validated concepts, we will be able to elaborate sail profile distributions and pass them on to the calculation process. The results will enable us to refine the final designs and launch the first prototypes of these high-potential rigs in March 2021. Then, a series of tests on the water and in the wind tunnel to confront the expectations and the perceptions and performances of Antoine and the test riders. 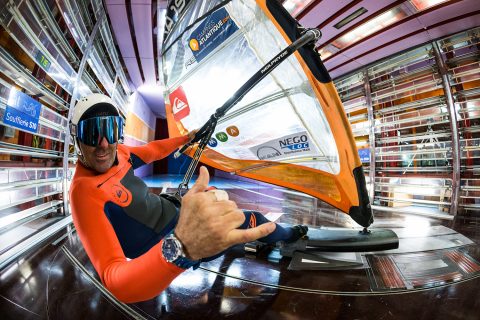 Depending on the performances achieved, Antoine will try to improve his current records in windsurfing and wind foil, first thanks to the new kit designed. But in their current configuration, even improved, windsurfing or wind foil cannot come close to Vesta Sailrocket 2. But these two bases are extremely important to test new concepts on, before leading to this machine of the future capable of competing with a Vesta Sailrocket 2.

We plan the first attempts with windsurf and wind foil to take place during the second half of 2021. Chasing the absolute sailing speed record will come later with the new exploration and developments by 2022. It’s very exciting times!”

Antoine Albeau – “I am super excited; this is the kind of project that every rider chasing the speed record dreams about! We are rethinking all windsurfing boards from zero and we have a lot of people helping us with this.

It is hard to say how fast we can go, but the idea of the project is to go fast with 30 knots of wind. We know that it is almost impossible to find a place where the surface of the water stays flat with 50 plus knots and if you look at the best foil boats, they are going at 50 knots of speed with 25 to 30 knots of wind, so why not us?

We will find more efficient ways to go faster, we were testing a lot in wind tunnel and we already learned a lot of things that we don’t want to tell of course! We will apply these findings and develop gear and outfits so I can go as fast as possible! 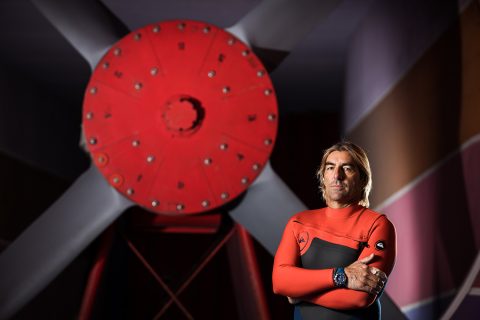 The wind tunnels taught us a lot about the aerodynamic aspects of the stance and equipment. It confirmed things that we knew, but we had no scientific confirmation of before. We also learned lots about other parameters that can we can improve.

We will go step by step for now, all the data is in the computers and being looked at. We are going slowly and we also need financial partners to go forward and start to build the gear we need. We aim to use the speed base of Principe (Andrea) Baldini that has been working for years now in the south of France. I think this is a really a good place for speed! It has one run of 500 metres and one run for the nautical mile. This is where we will be going to test and then try to make records.