Summer is here and festival season is well underway, and if you like your festivals eccentric, few come weirder than ‘Burning Man’ in northwest Nevada. So what does a desert rave up have to do with windsurfing and what is the Black Rock Yacht Club, Kevin Pritchard tells tale.

Yeah yeah, you’re going windsurfing at Burning Man. I know what you’re thinking,  sounds like a big excuse to go party your ass off. Beautiful girls and rock and roll. Well, not so much rock and roll, let’s say tons of E.D.M. – Electronic Dance Music. But Burning Man is more than that, it’s a festival of creativity. Many of the artists and support crew can only be described as mad scientists, spending immense amounts of time and energy creating some wild thing that people can climb on, ride on, dance around, or stare at for hours on end. You cannot believe the amount of time, money, and thinking outside the box that goes into this festival. The art projects, the party palaces, the lights, the sound systems, the infrastructure; there is no real way to describe it. Whatever you think it is, or think it could be, multiply it times a hundred, and then a hundred again.

Amongst the planning of going to Burning Man for the first time, I asked everyone I knew about it. I got ideas and information, and comments ranging from “You’re going to have an amazing time!” to “Why the hell are you going there?” I started my journey to Nevada from Punta San Carlos in Baja Mexico. Yeah, you heard that correctly, from one of the most dusty, sandy, salty, desolate points of Northern Baja to the dryer, maybe even dustier Nevada desert with an international border crossing between. Talk about a drive. The 5 hours at the border didn’t help, neither did the nice border officer who put me in a secondary check for 2 hours going through my van looking for more, I guess dust, which made a long drive even longer.

Burning Man is an eight day, 24-hour-a-day, out of control party. It is a combination of art, music and cooperation that one must experience and absorb to even begin to fully comprehend. Some veteran burners start planning a year in advance. Others start packing a month early to ‘ease into the burn’. For some people, Burning Man is their life. Truly. It started out as a humble hippie celebration of fire on Baker Beach in San Francisco. Now, twenty years after it moved to the Nevada Desert, it hosts over 60,000 people each season at Black Rock City, a temporary city erected in the Black Rock Desert of northwest Nevada for the duration of the festival. Art, music and lots of dust puts it gently. I want you to feel what it is like to walk, ride, or as I did, windsurf on a landboard across the desert’s dry playa, but I simply cannot.

“Art, music and lots of dust puts it gently.” 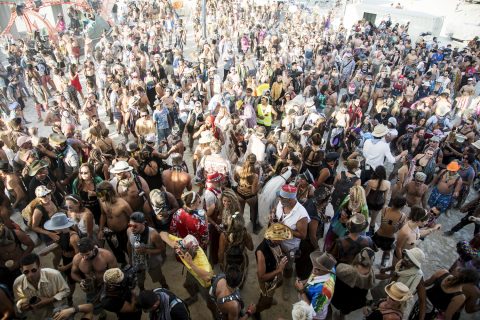 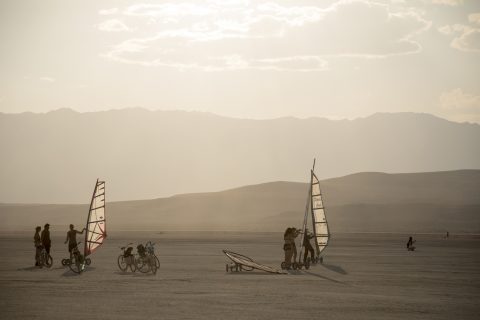 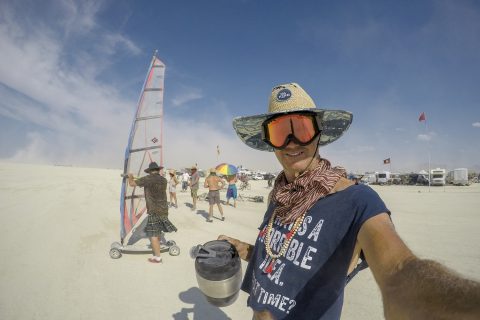 YACHT CLUB
When I pulled up to the Black Rock Yacht Club alone, having never been there before, my palms started to sweat. What am I doing here? Why did I sign up for this? I don’t know one person here. What am I doing? There was something different about it though. When you get there for the first time, they like to introduce you and welcome you with a hug. You might not know me well, but hugging is not my thing. I don’t like people in fact. Why I went, well I don’t know, but I almost turned around with the first hug. Windsurfing in the Nevada Desert? First of all there was no water for miles and miles, and secondly there were tons of people lined up to try it out. Strange. There were hundreds of people wanting to go windsurfing, all wanting to have fun and blast across the desert with a windsurfing sail. I have never taught so many windsurfing lessons in my life. To make it more strange, it was on a dry lake bed in the middle of the desert. Windsurfing. Yes. You heard it right.

My first run across the desert, I glided along, inches above the dry lake bed, flowing with the wind and enjoying the ride. Then the wind picked up and I found myself hanging on for dear life as the board careened along over the bumpy desert floor that had seemed so flat just moments ago.

The Black Rock Yacht Club is a group of “Burners” who teach windsurfing on land sailors at one of the biggest festivals on the planet, Burning Man. If you have never heard of Burning Man you are probably living under a rock, but it is a city in the desert, a network of dreamers and doers. It isn’t your usual event or festival. Their mission is to produce an event that guides, nurtures, and protects the community created by its culture. It is a city wherein almost everything that happens is created entirely by its citizens, who are active participants in the experience.

ROOTS
In 1997 Bill Weir and Jim Pettigrew headed out to Black Rock Desert for a bachelor’s party where they brought along some boards and sails that were much more primitive than what they use now. They continued to head out there each year to sail around, drink beer and blow shit up. When they went to Burning Man for their first time in 2005, they brought a land sailing rig and taught a few lessons in between grooving at the Green Gorilla lounge and cruising the desert at night on janky old bikes.

They continued to bring more rigs every year, and the camp grew. It took off, the people loved it and guys & gals were ripping across the desert! Their buddy Chad Nichols joined the crew and teaches hundreds of people each season. Mike Gebhart and Chip Wasson are also alumni. Bill passed away a few years ago but his legacy is carried on; his sons Logan and Walker are ripping sailors and help organize Black Rock Yacht Club, which just celebrated its 15th consecutive year on the playa. While  the  Burning  of  the Man is the main event, there is also a temple, created each year, where people can bring items, letters and memories of people whom they have lost. Among thousands of loved ones, Bill is remembered each year as the temple burns on the last day of the event, with his sail number US-M9 etched into the temple walls.

“I have never taught so many windsurfing lessons in my life.”

THE DEAL
There’s no cell phone service, no internet, no Starbucks. You bring all your own food and water. The only thing you can buy in the entire city is ice and coffee, most certainly not from Starbucks. Everyone takes care of themselves and takes care of each other. The cost of the general admission tickets are around $420, but what a deal. 8 days of art shows, dancing, drinking, food, camping, heck I made money going there just by not spending that somewhere else.

Burning Man’s philosophy is pretty cool. Include everyone, radical self-reliance, radical self-expression (and let me tell you, people like to express themselves), civic responsibility, and leaving no trace. I like living simply, this was the final weekend of my 4 months of living in my self-sufficient van, but there is a difference between van life and leaving no trace. Leaving no trace means you can’t even put your dishwater on the playa or road or anything. It is a little contradictory, because they put water down on the roads, but nonetheless it is pretty difficult to haul in and out all of your food, water and trash while not leaving a trace. My van’s shower is outside and so showering without dripping water, making a mess and sticking to the rules, is a little tricky. I managed to figure out a shower bucket system that worked out pretty good. At first I was a little hesitant to take a shower outside naked with 60,000 people, but by day two I had my pants off, suds flying all over the place, just showering away in a bucket right on the playa.. talk about self expression! 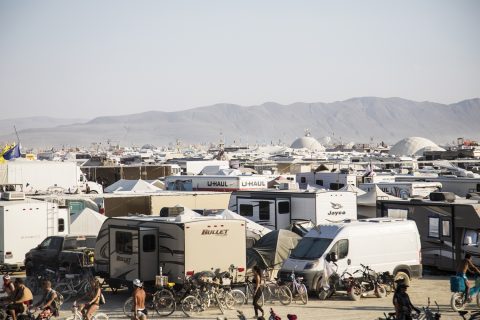 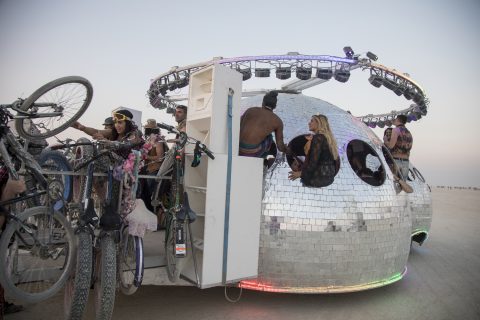 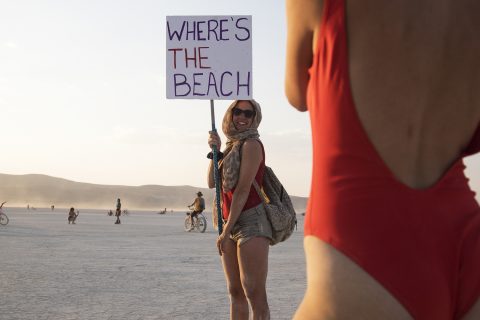 COMMUNAL
Communal effort makes this festival run. If everyone brings a little something; something that they are good at, or passionate about, then the idea is that everyone’s needs will be met. A girl from our camp described her experience to me, “One night, around 4 a.m. I was chilling back at camp, hanging around the fire. A girl walks up to us and asks if this is Black Rock Yacht Club? She had found a backpack in a porta-potty on the complete opposite side of the playa, 3 miles away. She had found a name and address and decided to make the trek to return it to its owner, who happened to be sleeping on the couch beside me. The woman was humble, happy to help out, but asked if we had any lollipops, as some people at her camp were craving them. I just so happened to have purchased 200 lollipops to gift to the event and so sent her on her way with about 150 of them. This kind of thing is probably where the term “the playa provides” comes from.”

You can come with practically nothing (except water, this is essential) and still have the time of your life, and be pretty damn comfortable while you are at it. You can also come too prepared. I brought a ton of food to Burning Man. Little did I know I was going to leave with a lot of food as well. I got there and the first thing I did was make myself a drink. Next thing you know, I am on my bike riding around just in awe. You get sucked into just riding and riding until you can’t ride anymore. And then you ride some more. Then you start talking to someone who has some food, they offer it to you and then you move on to the next camp. Start talking to someone else and they give you a drink, you move on, your bike breaks, you start to panic, but low and behold right there is a bike repair camp set up to fix your bike for free. What a place! 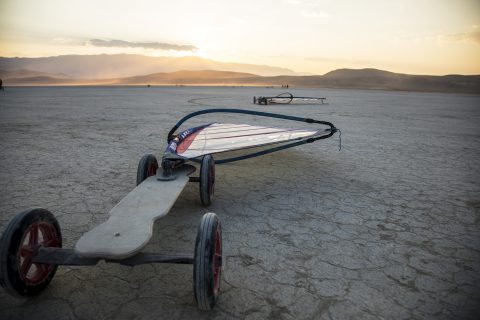 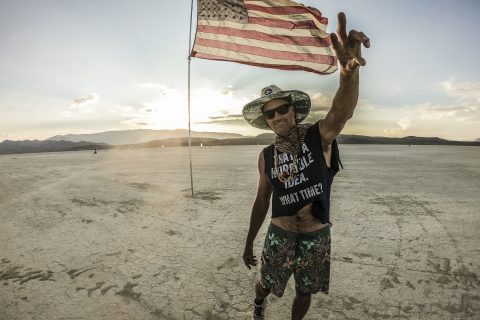 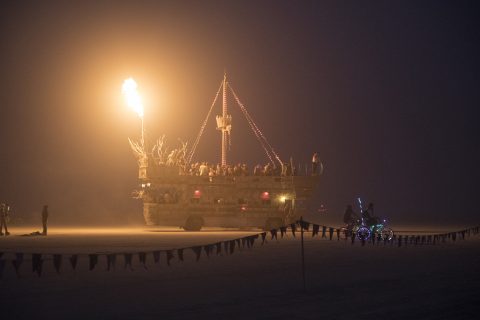 NIGHT RIDER
I remember riding across the playa the last night I was there. There were so many people, so many lights, so much activity going on. I kept riding, trying to take it all in with every pedal. As I came out of the lights, it opened up into the full on playa. Art cars driving around like ants. People walking, biking, laughing, enjoying the moment. I felt like I was in outer space. It was all too surreal to take in, a brain overload. Awesome, yet indescribable. When I went to leave Burning Man, I left thinking, well that was fun, but I didn’t have that magical life changing experience that you often hear about. Did I have one of the most wild, crazy, eye opening experiences of my life? Definitely! Would I go back? When I first left Black Rock City, I said never again. Four hours of driving to the airport to take a plane home, I started to think well, maybe I could go back next year. A few months later and I still can’t stop thinking about it. I hear some EDM music and my heart starts beating faster. I guess I am going to have to go back!