When Cloudbreak, one of the world’s heaviest waves, looks set to rock with wind and waves, you can be sure one man has his eye on sailing it – Jason Polakow. Teaming up with the Brazilian powerhouse, Marcilio Browne, the duo packed their bags for an ‘all in’ strike mission to the legendary Fijian break; this is their story. 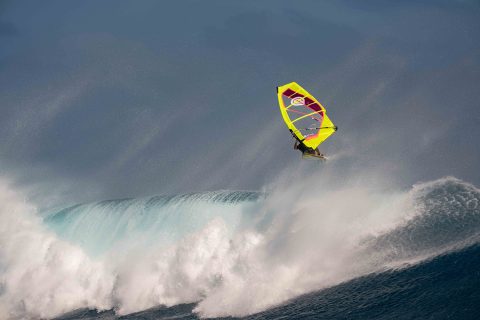 Jason Polakow
Last year I missed out on one of the biggest swells ever in Fiji and I did not want to miss another swell heading that way. Looking at the WAM chart, it was easy to see that Fiji was going to get hit hard with a good size swell and plenty of wind on the peak of the swell. I was already in Australia visiting my parents, from where it’s only a 4 hour flight to Fiji. Since my trip to Indonesia 2 seasons ago I have not scored so many great waves, so I was craving that adrenaline rush you get when dropping into a bomb.

I put out a few emails to the boys to see if anyone was keen. The next day I got a call from Marcilio Browne, a.k.a. ‘Braw’, asking if he could join me. A trip chasing good waves with ‘Braw’ was always on my to-do list, so I was more than happy to take him with me. ‘Braw’ is one of the top down-the-line wave sailors in the world, if not the best, so I was really looking forward to watching him sail down there.

We both knew it was only going to be one epic day of good waves and wind, so we were up at 5 a.m. and in the boat heading up to Cloudbreak by 5:45 a.m. It can be surprisingly windy first light at Cloudbreak and this day did not disappoint. We arrived with 15 to 18 knots of wind side-offshore and solid 8 foot surf. As always when I see amazing waves, I totally went nuts and we both started scrambling for our gear. 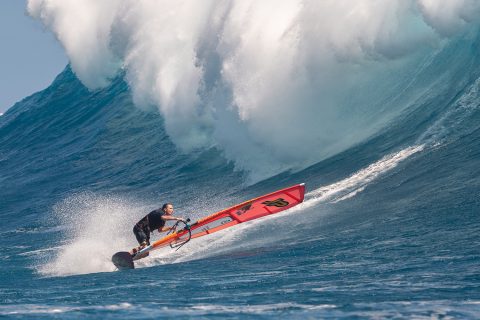 One of my favourite moments that day was watching ‘Braw’ drop into his first ride at Cloudbreak. We were on the outside when the first bomb set came through and I told him to go. He gybed, taking the last wave of the set. I watched from the outside as he dropped into the wave and his mast tip disappeared from my view, then reappeared as he cut back off the lip. It was quite a cool memory watching him ride that wave at sunrise, with the sun just above the ocean line. Spray was pouring off the back of the wave with every turn he did, until he went so far down the line and disappeared from my view. I stalled my board and sail into the wind and waited for another set wave. A few minutes later I heard him screaming as he made his way back out. He was just tripping out on how glassy the wave was. He told me you could ride any kind of board out here and you would be ripping. He was so happy. I’m sure he will always remember that first set wave he scored at Cloudbreak.

It only takes one epic ride to satisfy any fanatical windsurfer and ‘Braw’ had the best move of the trip. He hit the lip super late and super deep on a set wave. I’m sure that one wave he got was worth all the time and cost involved to get him down there. The conditions were epic, but due to the swell direction being quite south, there was none of the normal vertical walls at the end of the reef where the wave usually bends inwards. A lot of rides, as epic as they looked at the top of the lineup, ended up kind of fat, making it difficult to really set the rail. Don’t get me wrong, the day was epic, but this wave does offer even more perfect conditions and that’s what I and other top wave sailors strive to find. As for myself I had so much fun catching sets and sharing the experience with ‘Braw’. I could not really hit the lip or do aerials due to a nagging knee injury and I was forced to wear a knee brace to help stabilise my knee during our session, but I still had so much fun just surfing the wave.

We both sailed for six hours straight, ‘Braw’ having to stop due to muscle cramps in his legs and forearms and myself from wearing holes in my hands from not having enough calluses. The palms of my hands were bleeding badly. ‘Braw’ said it’s the worst he has ever seen, so you can imagine how bad they were! We were both dead from a full day on the water and celebrated the day with a nice cold Fiji beer back at our hotel. An amazing trip that is now logged in my memory forever!

“An amazing trip that is now logged in my memory forever!” 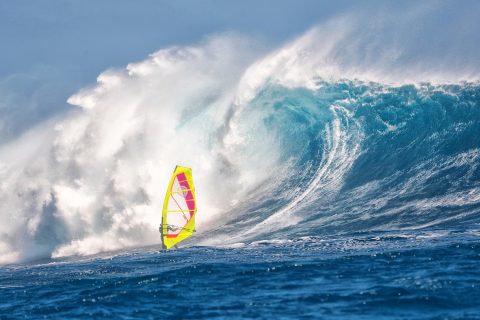 MARCILLIO BROWNE
Since that Namotu PWA event video came out, Fiji has always been on my bucket list as one of the locations I wanted to windsurf the most. I was in New York hanging out with my wife and son, when I heard JP was considering heading that way. I called him up and asked him if I could come. At first I was not sure about the forecast and I texted him asking what he thought, his response was – ‘Mate once you get one good one it will all be worth it!’ After that comment I bought my ticket. It was so cool to finally go on a trip with Jason, he has been one of my heroes since I was a child and his KA1111 movie was one of the reasons why I chose this career path!

So from that moment on it was full on, I got my flight back from NY to Maui so I could grab my windsurf gear and only a few hours later I was starting the last part of the journey towards Fiji. I was pretty beat by the time I arrived. Once we arrived everything was easy! Jason had it all covered – transport, hotel, boats, photo crew, video crew and rescue! It was awesome, nothing else to worry about, just relax and get ready for the swell.

The first day we were on the boat around 5:40 a.m., so that we could be ready to do some sailing as early as possible. It was quite a long boat ride and there was no way we could check the conditions before, we just had to trust the forecast and bet on it. On the way there we were both apprehensive, as we knew we would only have that one day to score it. By the time we arrived at the break, it didn’t disappoint, it was just firing. For me it seemed kind of surreal that it was so good and there was not anyone around! It felt like we were discovering a new place or something, but it was Cloudbreak. 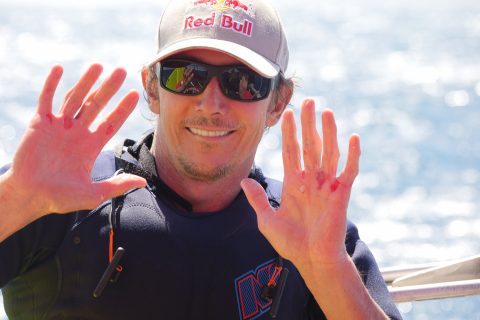 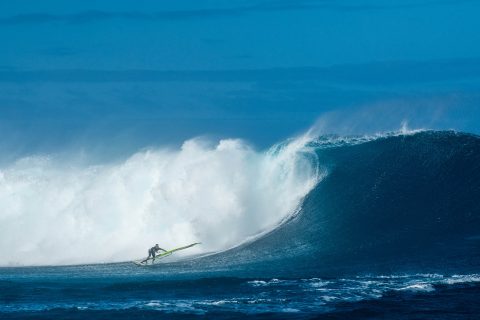 It was so helpful getting some tips from Jason, he had been there a lot and I could tell he really knows the spot well. He showed me which waves turned out to be the good ones, and which ones didn’t hit the reef on the right angle. Also when to kick out, which was important as by the end of the wave it was pretty much dry on low tide.

It was funny watching JP get excited about the waves, his shoes flew one way, his sunglasses the other, his phones were all over the place, he was like an excited child! I am really surprised nothing got lost. And then he finally jumped in the water, without his harness!

Once we were out on the water it was sick! We were alone, the sun was coming up and we had perfect conditions. JP started ripping as usual, dropping really late into the biggest sets of the day. I love watching his sailing, super committed bottom turns, coming up to the lip with more speed than down the face with some really sick top turns. I learned a lot from watching his approach, he really knows which waves he wants and he takes his time picking them. Every time he came in on a wave it was a bomb. At some point I remember sailing out and thinking to myself how we had scored big time!. It was sunny, perfect 5.0 m weather, big clean perfect waves and we pretty much had it to ourselves for most of the day! I could not believe it. Moments like that make it all worth it, the travelling, layovers, the money, jetlag, none of it matters when the waves are that good; the trip was worth every penny! We both sailed for about six hours! I only came in when I could not physically go any more as I had muscle cramps everywhere. By that time Jason’s hands were completely open and bleeding so he was happy to call it a day too. Those blisters were gnarly! So after that we came back to the hotel and had a beer, ate a steak and relaxed. No doubt one of the best trips of my life!

“I only came in when I could not physically go any more.”