Raceboard club racing is alive and kicking on a small lake in Cheshire, read on to find out more with words by Eric Paalman, introduction by Louis Morris and photos by Gordon Spruce.

“Most windsurfers these days seek exciting windy conditions, whether that is flat water blasting and speed sailing, freestyle, or wave sailing. However, an often forgotten side of the sport that once attracted huge popularity is that of club racing, often in conditions that most of us wouldn’t consider now. One such club is Budworth Sailing club in Cheshire. Raceboard fleet captain Eric Paalman tells us about their popular windsurf club racing:

Budworth Sailing club is located in Cheshire. We sail on a small pond about 1km long and 1/2 km wide and is partially surrounded by trees. It doesn’t sound much of a windsurfers paradise but if you ignore the lack of surf and tide it is brilliant for tactical raceboarding and having fun. The boards we use are mainly Mistrals (equips and race), Fanatic (Megacat), and quite a few Starboard (Phantoms). The maximum sail size we allow is 7.5m to keep the competition fair and open to all ages and sizes. Clothing is your own choice and various fashions are sported depending upon temperature almost showing neoprene throughout the decades. 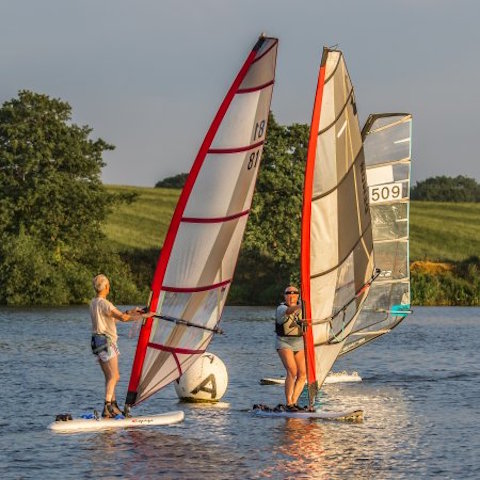 Tuesday evening the lake is ours to sail on. There are plenty of permanent buoys on the water so the race officer can set a competitive course making the most of the wind direction. With the lake being quite small compared to open water there are plenty of tactical decisions to be made and your mark rounding will improve in no time due to the multitude that you have to round in a typical race. Two races are sailed starting at 7pm and finishing at about 9pm, followed by a pleasant après raceboard chat at the local pub.
Besides Tuesdays’ racing we also have our own start on a Saturday afternoon where three races can be sailed. The water is then shared with a few dinghy sailors who also race the same course. Mark rounding can sometimes be interesting but the relaxed atmosphere by those who stand up rudderless and those sitting down with a tiller, ensures an amicable ending.
Last year year we increased our raceboard fleet by about 20% by holding Raceboard taster sessions. A few dedicated raceboarders got together and managed to get a few old training boards, a dry rotating training rig, and a few bright orange training sails. Altogether we can get 5 boards rigged out with a variety sail sizes ranging from 3.5m to 4.5m. Twice weekly for one month we provided one experienced raceboarder to two new boarders tuition. This worked well and the ‘one to one’ tuition ensured that within a month most could sail up and down the lake without falling in too much or having to be recovered from the far bank. Once bitten by the boarding bug they scoured Ebay and not before long 6 of them joined us on a Tuesday evenings. The new learners just did a basic triangle (some of them followed us around the ‘proper’ course already) and were ‘racing’ each other. The success is in my opinion down to ‘one to ‘one’ tuition at the required level, cheap relaxed training sessions (£6 per evening £24 max for the Month), and the enthusiasm of fellow Budworth boarders. 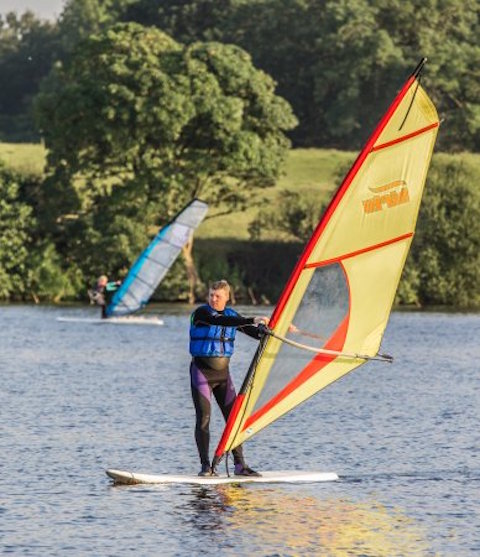 At Budworth we are a strict fleet racing club and it was good to see that the raceboard fleet has the highest average turnout for a main points series. The adopted ‘Queen Mary’ scoring system ensures that turn out as well as sailing well is rewarded and the competition goes to the last day of sailing. The series runs from mid-April to September and with an average turnout of about 8, a maximum of 18 boards on one occasion, is the proof that it can’t be that bad raceboarding on a small pond.
In the area on a Tuesday?
Come and join us for a session (we can provide the odd raceboard and rig). Please contact the raceboard fleet captain for further info on raceboarding at Budworth. [email protected]