The British Wavesailing Association 2019 titles came down to the final event in Cornwall and it didn’t disappoint! Mark Dowson rounds up the action and John Carter speaks to men’s pro champion Phil Horrocks.

Day 1 of the 2019 Cornwall Wave Classic saw the Pros on standby and despite the conditions to compete never materializing, the excitement and anticipation of Saturday’s forecast was rising. Lucas Meldrum recalls, “I was actually very nervous during Friday as the forecast was meant to be huge and I’m not so great in big waves. After speaking with the judges, I came up with a game plan which I could adapt to different conditions, so I didn’t have to worry about it on the day. I was super determined after spending time in the Canaries, but more down to the fact that I didn’t do well in Tiree and I wanted to prove myself. I’ve done a fair amount of competing this year, with not much success. I think I’ve learnt a lot about the mental side of things, I kind of worked out the best way to mentally prepare for heats. Ideally, you want to be in a state of mind where you’re  just focussed on sailing and ‘being in the zone’!”

DAY 2
Day 2 of the 2019 Cornwall Wave Classic saw the first action of the event and the Pros did not disappoint, putting on a show in the challenging, stormy conditions at Marazion. Phil Horrocks was one of the first to hit the water to warm up; Jamie Howard, James Cox and Andy King were pulling huge, floaty airs and crazy, stalled forwards and back loops in the hefty squalls. The local weather station from the Culdrose airbase showed the wind gusting over 60 mph for most of the morning!

Jamie Hancock made an impressive return to the BWA taking first place in the single elimination, whilst Phil Horrocks battled into a well-deserved 2nd. James Cox showed his mastery of starboard tack jumping and riding to clinch 3rd, whilst Lucas Meldrum got ‘in the zone’ and put in a career best of 4th place. On the other side of the draw Timo Mullen was only stopped by Jamie Hancock and Phil Horrocks. In the women’s fleet, Sara Kellet beat Debbie Kennedy and Claire Elliott made third. Tom Taylor took the single elimination win in the amateurs and I was delighted to do the same in the masters fleet in moderating conditions. Special mention to Finn Hawkins who came fourth in the amateur single elimination, as he is actually a youth! As only 2 youths entered, there was not enough competitors to run a junior fleet, so both Finn and Will Roland competed in the amateurs. 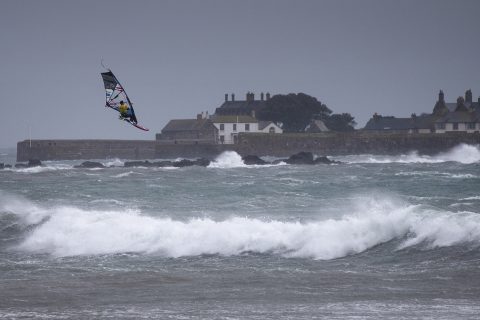 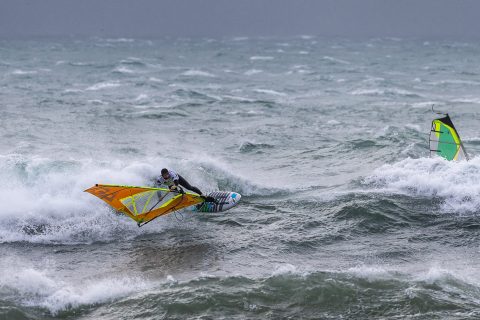 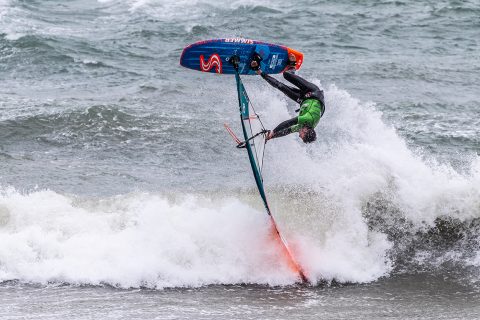 DAY 3
Day 3 saw the competition move to a chunky port tack ‘Bluff’, Steve Thorp charged his way back through the double, taking down Andy Chambers, Andy King and Timo Mullen!

It was clear to everyone that Lucas Meldrum had clearly raised his game since last year and he was able to halt Thorpy’s impressive comeback through the ladder to secure third place on the podium. Phil Horrocks battled it out with Jamie Hancock in the final and claimed the top spot to simultaneously become both the Cornish Wave Classic and British pro mens champion. In the ladies Jenna Pettit beat Debbie Kennedy to take 2nd place whilst Sara Kellet again claimed the ladies top spot.

Those in the masters fleet who were keen to extend their sailing time opted to compete in an ‘Expression Session’. Tim Lawes came out on top with impressive high forwards, I squeezed into 2nd and Steve Laddiman was 3rd. Justin Goodwin also deserves a mention as he broke his mast in a meaty Bluff closeout, but still came up smiling in the true spirit of the master’s fleet!

Ian Ross of RB Sails and the Cornwall Wave Classic event host was relieved that everything came together, “I’m stoked with how the Cornwall Wave Classic has worked the last few years. Having a rollover has proven to work and with a strong BWA team and exceptional competitors it has been a great weekend. It was probably the windiest I have seen it on Saturday morning and everyone got stuck in! I’m excited for next year!”

PHIL HORROCKS
JC asked freshly crowned British champion Phil Horrocks for his thoughts on the event and how his year has been – “Cornwall was a great event. The Saturday was unbelievably windy. I was on a 3.7 Black Tip hanging on, totally overpowered on my 85 litre Flywave. That is a nice board for when it is wild conditions, it is narrow with a lot of grip. In the morning it was crazy out there, a proper storm. Your smallest gear was all you needed.

When it dropped off a little I switched to my 84 litre Cortex, the more all-round board. I was still on the 3.7 and that felt magic. All the boys were shredding – Timo, Jamie and Coxy. When the competition started the tide backed off and the waves were better. The wind at first was so strong you could barely ride a wave. I kind of followed Timo and Jamie’s lead by sailing more upwind where the waves were cleaner. My mission was just to fill the scorecard, which was two waves and two jumps. You had to try and get your scores in as early as possible. I was kind of learning push loop tabletops as I was doing the heats, as well as trying tabletop forwards, which are usually high scorers. The standard of Jamie, Timo, Coxy, Bubble, Hibdige and Howard is pretty decent on starboard so I was made up to be amongst them. The Sunday was a bit more enjoyable as the wind moderated but the waves got bigger and had some heaving sections, which made it more fun. I managed a mini fight back in the double and took it to a ‘super final’, and then scored some good waves to take the win.

TRAINING
I went with my family for four weeks to South Africa in January to kick off my year. With the family I am having to cut down the amount of sailing and length of trip to accommodate family time. It is not a boys windsurfing trip anymore. I have three kids 6, 4 and 18 months! Taking them to the beach every day gets quite tricky. I am a bit more limited in my sailing and just doing an hour or two here and there. At the moment I am self-employed and do building work at home and I fit that in around the times that it is not windy. I have a portfolio of property that I rent out so I am also a landlord with that. That gives me flexibility. There are certain times of the year I can’t leave, but the rest of the year I can do what I want as long as everything is in good order before I go. I am fairly flexible and can work around the weather forecast, so that works out for me!

In July I went to Galicia which was mostly camping. I took my windsurf gear and had the odd decent session in side-off. I did a lot of surfing, which has helped me stay fit. We have had a windy autumn so there has also been loads of sailing at home. We have the occasional starboard tack day up in Wales and I do make a point of getting in the odd day of starboard practice when I can. It is needed and I like learning something new.

In October Tiree delivered and now the BWA season has finished I am off to Chile for a month on a boys windsurfing trip. I will be in debt for brownie points with my wife after that!

HIGHLIGHTS
My standout moment of the season was the day at the Maze in Tiree. In the single elimination it was head to logo high, 5.0 sails, side-offshore and sunny. Probably some of the best waves I have ever seen on Tiree, I wish we could have more days like that. I think that was my third or fourth Tiree Wave Classic sword, I think I am also four times British champion too. That brings me level with Ben Proffitt I think, but I still have a way to go to catch up with John Skye. There is a little bit of motivation to keep me going there!.