2019’s Weymouth Speed Week was hailed by organisers as one of the windiest ever! Pete Davis tells us how it all went down!

Weymouth Speed Week is the longest running speed event on the planet. Started in 1972 by Sir Timothy Colman (yes he of Colman’s Mustard) it soon got a reputation for fast speeds, innovation and pushing the boundaries of what could be achieved with sail power. That heritage lives on, it may not be as big as its Johnny Walker sponsorship heyday and in speed terms has been overtaken by purpose-built speed strips in France and Namibia. But it still draws the best speedsailors from all over Europe and beyond. Guaranteeing wind is hard in the UK. So the event is always held in October to try and tap into the high winds generated by low-pressure systems that come through that time of year. The forecast for the 2019 opening day looked light but the rest of the week looked good. The big question however was would the event harbour record of 38.44 knots, set by Anders Bringdal in 2008 go? The first prize giving was for the youth fleet,who only race on the weekend, and was sponsored by Boardwise. The battle for the top spot from last year between Tyler Baker and James Faley started all over again. This year the skill level of all the riders went up through the roof. The result could not have been closer with Tyler taking the top spot at 30.85 knots and James only 0.3 of a knot behind. From Sunday the lead for fastest speed of the week changed hands every day and it was fantastic to see the new generation of windsurfers showing how good they have become. Ahead of a very experienced fleet was young 19 year old Scotty Stallman with a very impressive 34.43 knots set on very choppy water on a course in the harbour due to the southerly wind direction. Then on Monday 22-year-old James Battye took it up to just under 35 knots in knee high chop. Wednesday onwards the wind changed direction to southwest, which allowed for a flat beach course to be set along the causeway.

With the flat water the more experienced speed sailor Jim Crossley pushed the speed up again to 35.67 knots. Beaten only by James Longmuir on his speed kite with an incredible 37.18 knot run. With only a few days to go and an excellent forecast the long-standing harbour record looked in danger. But was it going to be a windsurfer or a kite? We didn’t have to wait long to find out. On Thursday morning kiter and previous UK speed record holder David Williams broke Anders overall record with an amazing run of 39.14 knots. The Swede’s speed had finally been beaten. With one day to go the windsurfing fleet were still confident and felt they could get it back, but time was running out. Who could pull it out of the bag? 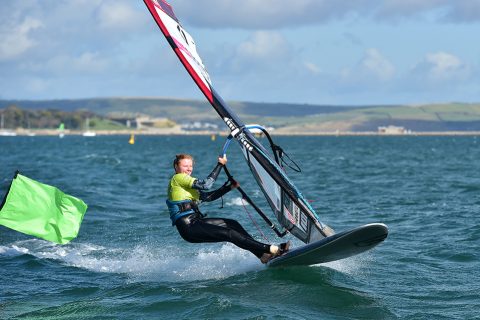 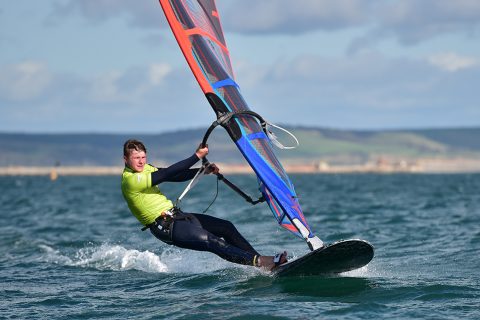 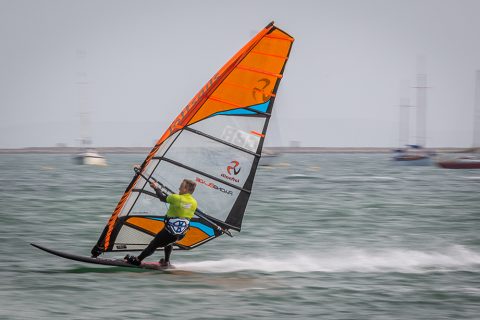 Friday morning came and so did the perfect storm. The wind was southwest and very strong, which allowed all the competitors to blast along the beach towards Weymouth in super flat water. Expectations were high that 40 knots, which has never been achieved in speed week competition before, could be achieved. It was a brilliant day of competition, the best the organisers could remember, with wind gusts of over 42 knots and every rider giving it their all. Spills and crashes galore and one windsurfer trying to get the perfect angle hit the start line so close he pulled out the flag from the buoy and sailed with it for the first 100 yards wrapped over his head! After a very hard week and 8 hours on the water in super strong winds on the last day, the event was over and all that was left was the prize giving.

Usually the fastest speed of the week is known at prize giving as it is set earlier in the week. Not this year however, nobody knew who had done what as it all came down to the last day. The atmosphere was electric. Unfortunately for the windsurfers, it was the kite surfers who came out on top overall. The end result was so close they were only separated by 0.1 of a knot. Fastest was James Longmuir with 41.21 knots and sooo close behind in second was David Williams with 41.12 knots. The windsurfers tried everything and left it all out on the water. The burning question was who came out ahead? Would it be one of the young guns like Scotty or James or the old guard like Jim Crossley, or previous winners like Belgian speed record holder Patrick Van Hoof? They say, “Speed sailors don’t get older, they just go faster”. This year’s fastest windsurfer proves that saying. Local speed legend Pete Young was not featuring at all during the week due to fitting windsurfing in around his job as a local builder and was a complete dark horse. He used his years of experience though in sailing in the harbour to great effect and achieved an amazing 38.01 knots just off the long-standing record of Anders Bringdal.

The other harbour record to tumble was that of speed queen Zara Davis, winner of Weymouth speed week 14 times, who unfortunately was not competing this year due to injury. The mantel was picked up by 22-year-old PWA sailor Jenna Gibson to achieve 34.15 knots, beating Zara’s long-standing record of 32.89 knots. Other winners were Olly Wood 33.03 knots in the first timers, Neven Juretic 33.39 knots in the amateurs and Garry Connell 35.89 knots in the gold fleet.

Under the umbrella of speed week the Hey Dude Shoes UKWA Speed Championships are also decided. The results are based on the two fastest runs from rounds where a percentage of riders exceed 28 knots. Some years they only have one or two counting rounds, not this year! There was 12 four-hour rounds, 3 discards and 6 days of hard competition to decide the most consistent speed riders over the whole event. It was a daily war of attrition, as the results were so close and every run could make a difference. In the end the top four were only separated by less than 8 points and 2nd, 3rd and 4th separated by less than 2 points! The qualifying rounds started on the Sunday. The early leader was Simon Pettifer and he held it for two days, but going into day three the youngsters were after him. Scotty Stallman was only 0.1 of a point behind him and 22 year old Yorkshireman James Battye was 2 points behind Scotty.

By Wednesday, Scotty had taken the lead and James was hunting down Simon. Strong winds from the southwest gave Scott with his local experience an advantage and allowed him to dominate the event with multiple first places to take the overall win and James’s fitness and winter slalom racing experience allowed him to overtake a battle weary Simon and pushed him into 3rd place. Jenna Gibson led the women’s fleet ahead of Katherine Skinner. What an amazing week. Next event is October 2020, so get your name down! Thanks to the sponsors Hey Dude Shoes , Simmer Style, O’Shea, Boardwise, Flymount, Sonntag-Fins, F-Hot Fins, Natural Design, Old Guys Rule, Reitveld, ION, Fanatic, Duotone, The OTC and of course the organisations that assist us – the UKWA, AYRS and the staff at the National sailing Academy.