As regular readers will know, our roving reporter John Carter has a bit of a thing for windsurfing and big ships! So with a large number of the world’s most prestigious cruise liners all taking shelter in Weymouth Bay due to the COVID-19 crisis and Ross Williams and British Olympian Tom Squires up for ‘flybys’ on their foils, JC’s radar was pinged! From our May 2021 issue he reports back on a successful day of ‘shipspotting’.

Ever since lockdown started, we have had several big cruise ships parked out in Sandown Bay where I live, and the presence of almost all the P&O Cruises fleet in Weymouth Bay has been well documented on the news. Once windsurfing was allowed again in the UK therefore, I was on the lookout for the perfect day to head to Weymouth to make the most of any photo opportunity with the assembled armada. Yes, I have done shots like this before, but never with foiling, so we could at least head out in lighter winds and hopefully get close up to the ships at anchor. Finally, a forecast popped up on the weather map for an early easterly breeze and a sketchy plan was set in motion. 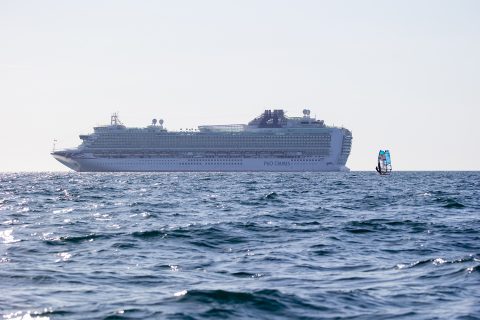 A few days later, it was action stations at 3 a.m. for Ross Williams and I as we headed for a 4 a.m. ferry from the Isle of Wight on a beautiful sunny morning. Our plan was to hook up at 6:30 a.m. with Olympian Tom Squires, Joe North (chief instructor from the OTC) and Windsurf’s test editor, Tris Best, who would be driving our support RIB. The forecast was for the wind to die early, so the race was on to score the action. Adding to the excitement was the fact that Ross and I hadn’t been off the Isle of Wight in months, so we were all fired up for this mini adventure. 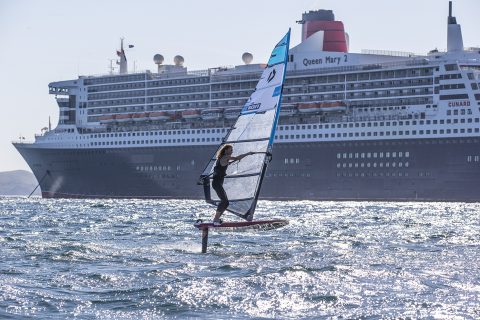 As for Tom, his Olympic dream of competing in Japan has been put on hold due to the pandemic. Tom is an Oxford boy, but spends a lot of time in Weymouth which he uses as a base for his Olympic training programme. With foiling on the cards for the Olympics in 2024 in France, he spends time getting familiar with the new Olympic class while still training on the RS:X as he campaigns for a medal in 2021. 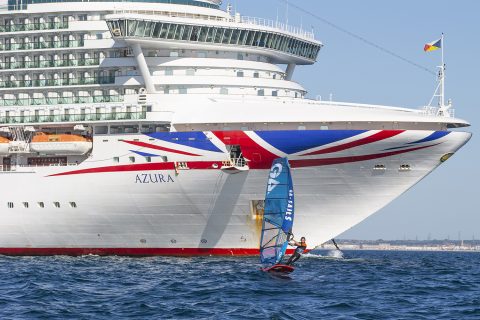 So how would it work out, Britain’s top PWA racer versus Britain’s Olympian in a race upwind to the cruise liners? Would they take it easy or would it turn into one of those subtle battles on the water? With both athletes being racers at the top of their game, I was pretty sure some sort of upwind battle would take place and then once on location the real fun would begin! 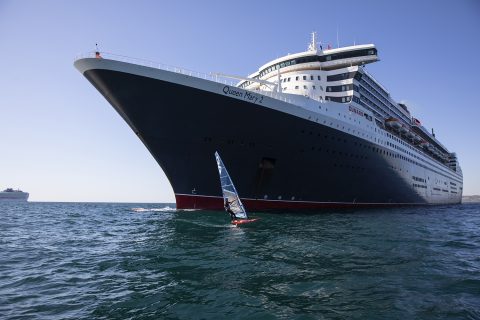 I spent the whole journey between Portsmouth and Weymouth worrying that the wind would die by the time we arrived. According to the live readings it was holding at about 15 knots, but due to drop by 9 a.m. to almost zero. Foils would definitely be the order of the day as both Tom and Ross would have to beat up to the boats which were located about 4-6 miles upwind from the OTC launch. On arrival we still had a solid breeze blowing from the east and Tom was rigged and ready with an 8.8m Duotone Warp Foil plugged into a Fanatic Falcon Foil 180, which was very impressive for 6:30 a.m.! 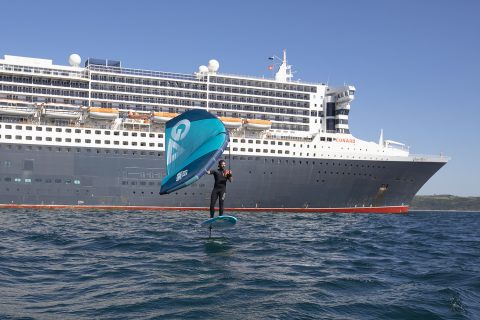 Ross on the wing

Joe North was rigging an Ezzy 7.5m, but it was dubious if he was going to keep up with the two pros once they locked horns in the battle upwind. Ross opted to rig a brand new 9.0m Vapor Air along with the new Tabou Air Ride Plus. Out in the distance we could make out the outlines of The Queen Mary 2, Queen Victoria, the Azura, Aurora and Arcadia, all spread out in the shelter of the bay. The ships were much further away from the OTC than I had envisaged and the boys had a mission on their hands just to reach our target area. The OTC crew have an amazing sailing arena inside the walls of Portland harbour, but first Ross and Tom would have to work their way out of that enclosed area of and into the open sea, before heading another few miles upwind to the distant ships, all against the ticking clock! 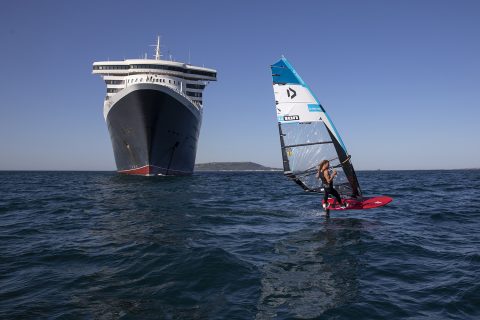 On previous missions to capture the scale of windsurfing up against giant ships, the battle was all about timing and being in the right place at the right time to catch them coming in and out of port. This time around we had five huge cruise liners all anchored up like sitting ducks, so theoretically shooting them up close should be easy. By 7 a.m. we were on the water with Ross and Tom soon leaving poor Joe trailing in their foil wakes. Unfortunately the wind was not quite there for Joe, not to mention the fact he was up against two pros who were pushing each other at every opportunity! 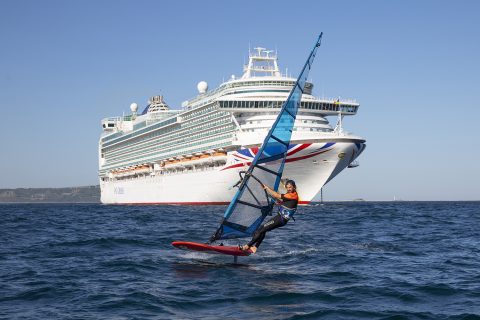 Ross with the Azura

Finally, after a good forty minutes sailing into the wind we were amongst the ships and headed out to the Azura, the biggest P&O boat on show. Tristan steered our RIB into the perfect spot right beneath the Union Jack on its giant hull and it was game on as Ross and Tom flew past us on the foils. 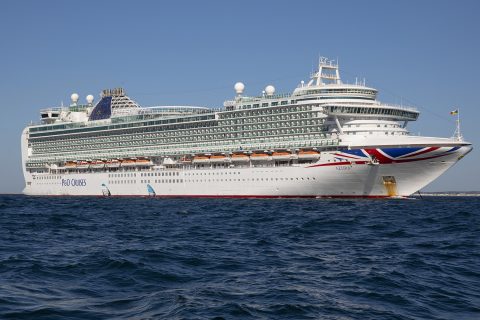 Foiling past the Azura

The Azura is 290 metres long and has been in service with P&O for ten years, hosting up to 3000 guests at full capacity. The Azura is one of P&O’s largest ships, boasting 14 public decks, 11 restaurants, five boutiques, four pools, two lounges and over 900 private balconies. With the hard work over, Ross and Tom were having fun just cruising around the ship and once we had scored a decent batch of shots, we decided to head over to the Queen Mary 2 which was at anchor about a mile away. As we blasted in the RIB we had dolphins flying next to us in the water and with the wind still blowing steady, this was already proving to be a successful day. 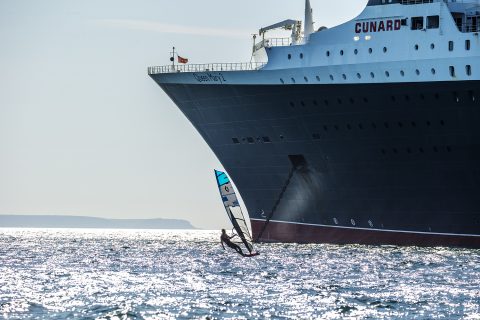 Tom sizing up the target

The Queen Mary 2 is Cunard’s flagship cruise liner and is a whopping 340 metres long, which is about the same length as the Empire State Building is tall! She entered service back in 2004, cost a hefty 800 million dollars to build and has a passenger capacity of around 2700 as well as accommodating 1250 crew. 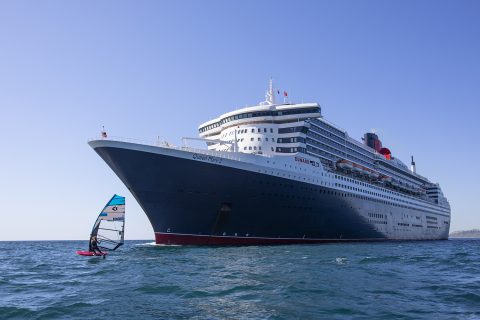 When the Queen Mary 2 joined the Cunard fleet, she was the longest, tallest and most expensive passenger boat ever built. In 2007 it visited Sydney Harbour to hook up with the QE2 and over a million people came to visit the two ships together. While on a world cruise in February 2020, Cunard had to cancel Queen Mary 2’s port call to Hong Kong due to COVID-19 and the ship transited instead to the safe anchorage of Weymouth. 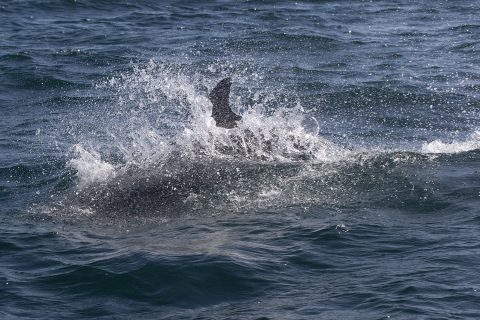 The pod of dolphins joined us for the next session as we shot the foils flying past the giant black hull of the Queen Mary 2. It was awesome to be so close to this amazing ship and also witness the tiny scale of the windsurfers close up with the hull of this this huge vessel. On a normal day I would have been tempted to have a couple of ice-cold beers on the boat, but it was still only 8:45 a.m., so tea and biscuits seemed more in order! 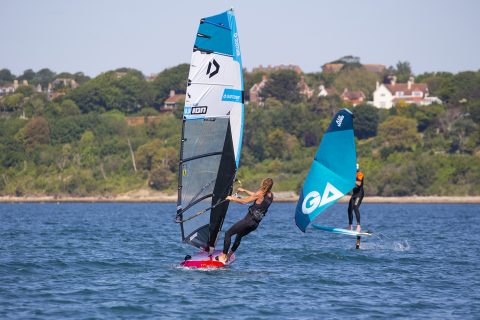 With plenty of shots in the bag, Ross wanted to have a quick blast on his wing foil before we headed back to base, while Tom happily cruised around on his wind foil, darting over to the Queen Victoria and the other P&O cruise ships in the bay. The one thing I could feel was that the wind was dying fast, so that was our cue to head back. With Ross on the wing and Tom still on his foil, the ride back was a blast as we cruised towards the OTC with the mission in the bag! 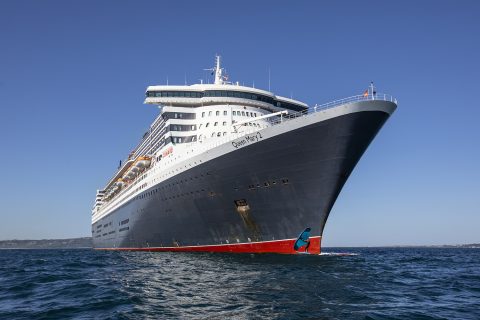 We made all it back to the OTC no problem just as the wind faded to almost zero and it was still only 9:30 a.m. The photo shoot showed the versatility of foils to do these long distance trips at speed and the foil’s upwind ability and light wind efficiency was key. 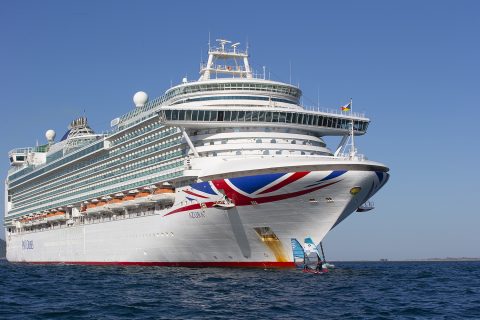 When these hotels of the sea start sailing again, I might plan a follow up mission; but forget Portland, the Caribbean is calling! 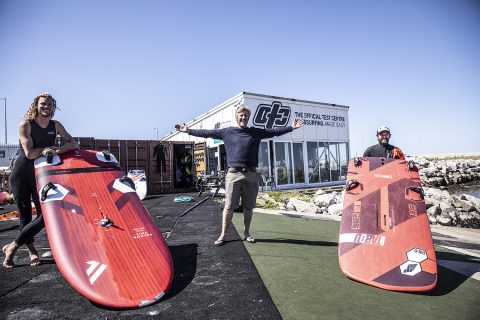