The one-board wonder to throw in the back of the van for those precious trips to the coast. No matter what the conditions, this board is sure to get you on the water, without leaving you feeling you’re playing half-baked. Hats off to the concept; it is a genuine success and we’re not giving this test board back without a fight! 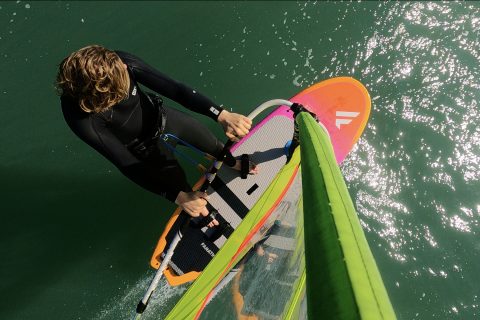 The Bee is new to the Fanatic ranks this year – a new concept encapsulated in a single board size, said to be capable of adapting for four different sports. Shaped by Sky Solbach (the man behind Fanatic’s reputed Aero foil range), it has a blend of characteristics to make it applicable for its various roles. At first glance it simply looks like a compact SUP surfing board, with a short outline, wide shoulders, parallel mid-section and double-wingered swallow tail. The monopad covers much of its gently domed deck (with a kick pad incorporated in the rear), the rails pulled in and rounded in the nose, as you’d expect of a surf-focussed board. Supplied with three multi-boxes and 5” Stubby fins, you’d be forgiven for thinking that the Bee is no more than a contemporary surf SUP. But the story doesn’t end there. The Bee also comes supplied with a set of four Premium footstraps and hosts a mast-track well forward of its mid-point, whilst on the underside there’s a couple of 10” US boxes, permitting the mounting of a foil. Available in one construction option, it is produced using Vector Net Technology (VCT), with stringer and bamboo wood reinforcements in key areas through the board.

“Our new Bee is the ultimate watersports-weapon. We’ve packed four different dimensions of pure fun into one board: SUP Surfing, SUP Foiling, Wing Foiling and Windsurf Foiling – you decide on the setup you ride.”

Fitting the straps onto the Bee and plugging in both sail and foil, we have to say, the Fanatic surprised us with just how well it performed as a wind foiling platform. Its outline and appearance is distinctly surf-SUP biased, yet when used for wind foiling, the rider’s stance is placed well forward of the board, focussed over a flatter section of the board’s rocker. As such, it feels settled and easy underfoot off the plane, its wide outline and parallel rails providing plenty of stability, before gliding up smoothly onto the foil. Easy to use with or without straps, the monopad provides plenty of traction, the subtly domed deck keeping the rider in a relaxed upright pose over the board. Cruising effortlessly for hours and with plenty of room for manoeuvres during transition, the Bee is a gem for wind foil cruising, ideally partnered with a medium to low-aspect foil, such as the Flow 1500. The only observation as a result of the rider’s stance being so far forward is that there’s plenty of board area behind, in the tail, resulting in a few noticeable touchdowns through the tail as you traverse any coastal chop. The strap positions are also quite inboard, so we did find ourselves moving our feet further out, onto the rail to help force the issue a little more when driving upwind. In fact, we’d go as far to say that we had more fun and the Bee is more playful without the use of straps entirely … but that’s a personal choice.

Setup with an Aero 2000 foil for wing-foiling, we underestimated the Bee yet again! It is a great deal of fun, feeling balanced and stable underfoot at rest, before lifting effortlessly as the wing’s energy is transferred. It is easy to shuffle the feet around to achieve the right balance, its relatively long length making it easy to recover from any breach and its width forgiving of any clumsy foot movements. A great tutor for both winging and wind-foiling, we didn’t get a chance to try it for SUP foiling or surfing, but given its stable, easy nature we are willing to guess that it retains its endearing nature in these two roles too. A board of many guises, it’s was a pleasure to use and really demonstrated the true versatility and potential of the modern foiling platform.