A foiling chameleon that is perfectly at home with both sail and wing, the Magic Carpet may be a little heavy in this MTE construction, but set it up correctly to overcome any weight deficiency and the true versatility of its design shines through. 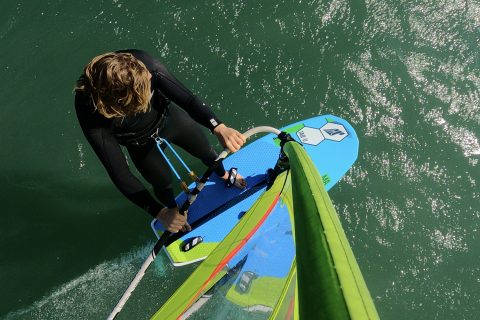 The Magic Carpet enters its second year in production for 2021, this 110-litre version joining its larger 120-litre sibling in a two-board lineup late in the 2020 production cycle. Released solely in the brand’s price-pointed MTE construction initially, both sizes are now also available in TEAM technology, shaving up to half a kilogram off the weight … and adding £350.00 to the price-tag in the process. Both boards are designed for use in multiple foiling roles, from wind foiling to SUP foiling and wing foiling and play host to plenty of features to enable such use. Short and wide in outline, the angular nose is complimented with a stumpy boxed off tail, the evenly domed-deck witnessing a multitude of strap insert options and a large extended deckpad with built-in kick pad. On the underside there’s the brand’s familiar double concave through the nose, leading to vee in the tail … but that’s where convention ends! There’s a hard defined edge to the rail in the tail, which is tucked under the board’s outer edge and curves outwards to a high apex concave rail, intended for better water release. The hard edge drops away to a spoiler tail in the rear and there’s both Deep Tuttle and foil track boxes provided, to ensure maximum compatibility. The rocker-line of the Magic Carpet has also been adjusted with a lower entry to help improve early lift and with a carry handle incorporated along the centreline of the hull, its practicality during launching and landing has also been considered.

“We blended the different board concepts and came up with the Magic Carpet, which is the perfect platform for various foiling disciplines.”

Fixing the GA Hybrid 1200 foil into the Magic Carpet’s Tuttle Box for our first runs, we placed the straps in their outboard settings and loaded it with a 5.7m sail. Feeling compact underfoot, the 110 sits down in the water due to its weight, the wetted-line adhering to the curvature of the rail and making the board a little sticky to get going. Deliver the power, search for the straps and with good foil-pumping technique, it can still be encouraged to release early though. Once going the deck shape and geometry of the Magic Carpet are excellent, making for a very comfy and responsive ride. With six screw inserts in each footstrap plug, there’s plenty of tuning ability to suit all rider weights and styles, the board capable of being partnered with a higher aspect foil and larger rigs if desired. Playing with its setup though, we thought GA’s Hybrid foil was a great partner for it, providing plenty of connection and feel through the board, and whilst the 110 has a crossover brief, there is certainly no impression that its wind foiling performance is in any way compromised. A good tutor for the progressing foiler, there is plenty of room in the board’s tail for movement and foot changes during transition, its compact nature making it responsive and most of all fun for manoeuvres on both flat water and coastal arenas.

Changing the foil out for a 1600 cm with a plate head setup and taking the straps off, we took the Magic Carpet out for a winging session. The same sticking experience for initial release was witnessed in marginal winds – a factor we’re sure would be improved in the TEAM version. Moving the foil further forward in the track helped to increase early lift response, but the real difference was felt when a 2000cm front wing was introduced, its low-end lift helping to annul any resistance felt through the rails. Once flying, the 110 was balanced and comfortable underfoot, the gentle dome of the deck and grip of the monopad providing the comfort and confidence to push. There are strap options along the centre line as required, but for those learning to wing, the wide platform is certainly accommodating, whilst the kick pad helps to provide clarity of stance position without looking. We didn’t get a chance to try the Magic Carpet in SUP-foil mode … but for wind foiling and wing foiling it was a great deal of fun and the ideal tutor.