Crisp, exciting and involving, the Wizard 130 is all about high octane manoeuvre-oriented wind foiling, and will keep the most demanding pilot captivated. 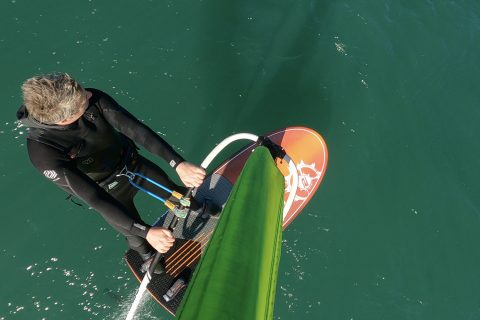 Completely refreshed for the new season, the Wizard series enters its third iteration and has been refined to three sizes, from this 130-litre model, to a tiny compact 90-litre version, just 147 cm in length! All are shorter, slightly narrower, yet thicker than their predecessors; the magic thickness for all three boards being recorded as 12.7”. The other big change is that all boards solely adopt the US box / foil track system for fitting the foil, the brand’s reasoning being that it is much more practical for achieving the right setup and ride balance. Inboard and outboard footstrap inserts are supplied, including a central back strap option, the new Velcro straps sitting on top of an extended diamond-grooved monopad. And whilst this 130 could conceivably be used for early-stage wing foiling use, its smaller siblings are very much designed around both wind foiling and wing foiling, with extra strap inserts placed forward and along the centre line. Produced in China in a biaxial carbon layup, it is finished with a misty visible sheen to the non-slip on the deck, forward of the monopad, which slowly wears over time and use.

“Floaty enough to uphaul, yet compact enough to fit in the back of a station wagon, the Wizard 130L improves upon the previous 125L model with reduced length and width, but increased thickness.”

Short yet wide, the first observation noticed as you step on the Wizard is that the geometry is very much focussed towards the rear of the board. Uphaul in a conventional fashion, with feet either side of the mastfoot, placing equal weight on both, and the 130’s nose will instantly do a disappearing act underneath the water! Instead, be more dynamic in uphauling, snapping the rig up to get power on quickly and shifting weight rearwards as soon as possible. With your stance already back, the straps are not far away at all – a particularly easy win when using the inboard positions. Partnered with the V3 Hover Glide FWind, the lift comes on quickly and easily as the rig’s power is channelled into the board, the Wizard’s short length allowing it to respond effectively as the foil is pumped, releasing sharply from the water’s surface. Once in flight the 130 feels alive and playful, alert to any changes in foot pressure and intent from the rider. It’s like aquatic go-karting in animated suspension – zipping around the sailing arena whilst feeling loose and snappy underfoot, involving the rider every step of the way. We used the Wizard comfortably with various foil styles and sails up to 7.0m, with the straps in their inboard positions (always utilising a double back strap setup). Slingshot claim this 130 can be used with sails as big as 9.0m, which in our opinion is quite bold. It could well be possible, with the straps in their outboard settings and the right high-aspect foil … but it’s not where we believe the Wizard’s strengths really lie. We believe it’s a fun manoeuvre-oriented wind foil platform, one that thrives on being danced around a sailing area and not taken too seriously in a straight line. It’s inspiring to sail and will encourage the rider to try those full foiling downwind 360’s, or to venture out into coastal waves and swell. In transition, the Wizard responds as if it is linked telepathically to the rider, feeling so tight and compact underfoot. And yet, during the critical part of the manoeuvre, the width in its tail provides ample room for the foot change, the inset straps perfectly placed for quick reengagement and powering out of the turn. Is it applicable for the novice foiler? Quite possibly, yet they need to be of a proactive disposition, rather than being nervous or passive, and expecting the kit to simply do the work for them.