Foiling freedom and fun in its purest sense, the Pocket Rocket dynasty continues, offering a versatile foiling platform in a compact package. 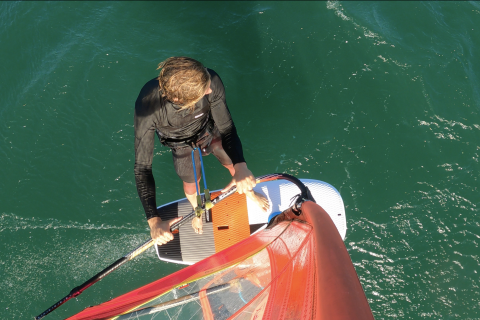 The Pocket Rocket has had a bit of a facelift for 2021 (Year 26 for RRD). Taking prompts from its predecessor, this 180 (referencing its length) is a new design, sporting a tail kicker and progressively bevelled front rails, with the intention of endearing it to other foiling disciplines such as winging and SUP’ing. In addition, it now has a full EVA deckpad covering from nose to tail, and is joined by a larger sibling – the 200 (packing in 140 litres), both sizes being available in either E-TECH or the brand’s dearer LTD construction. Interestingly, this 180 E-TECH is not supplied with footstraps as standard … and if you look at the visuals provided by the brand, all the wind foiling shots of the Pocket Rocket are strapless. The deck shape is very gently domed in the rear, yet scooped out in the nose, said to encourage “intuitive and comfortable foot positioning”; and the practicality continues, with carry handles provided on both the hull and deck. There are two leash points offered on the tail of the board, plus a similar fitting on the nose – a tether point for a nose-mounted Go Pro perhaps? All potential foil compatibility options are covered, with the inclusion of a Deep Tuttle Foilbox to compliment a couple of extended US tracks for a plate mount. 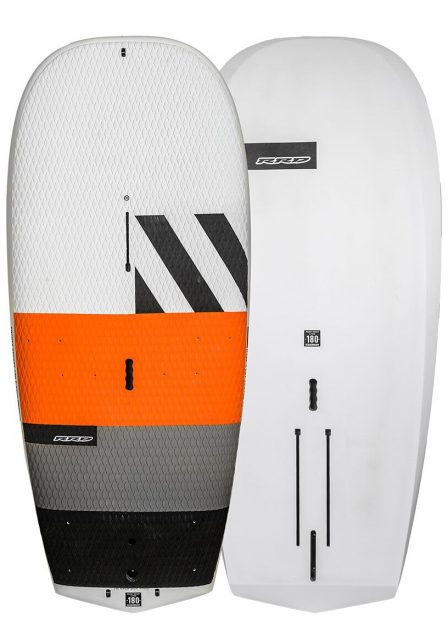 “The Pocket Rocket Y26 is a unique board for wind foiling and convertible to wing and SUP foiling. Its reduced length helps to take off earlier, stays up foiling longer and perfectly floats when uphauling the sail.”

With relatively little refinements made to the design of the Pocket Rocket, it’s no surprise that it felt very similar to its predecessor … in wind foil mode at least! Despite its short length it can carry 6.0m rigs fine, its wide shoulders providing stability, whereas most of the volume and float is stored in the tail, requiring the rider to quickly shift rearward as the sail’s power is pulled in. Used in strapless mode, there is plenty of deck to move and skip around on behind the mast track. The LTD construction of the 180 has a quoted weight of 8.0 kg, this E-TECH construction is 9.35 kg and does demand a little more input from the rider than we recall of the lighter LTD version we tested last season, pumping the foil and sail in sequence to make the most of lighter airs. Its short length makes flights comfortable and once released and going, the Pocket Rocket is every bit the playful companion we remember. It encourages a different style of riding, more relaxed and harmonious; an upright stance, cruising and taking in your surroundings, rather than locked in and racing from A to B. And because you tend to be on a much smaller rig, the reduced forces through the arms deem the harness and lines surplus to requirements! Just tuck the hips in, extend the arms and let the board glide. We tried the 180 with various foils and in this strapless guise, a low aspect foil is nigh on imperative. Your feet naturally gravitate forwards and towards the centreline of the board, well forward of the footstrap plug positions. Which brings us onto a point worth noting. When using straps on the Y25 version last year, we preferred the inboard positions for ease and practicality (the outboard positions amplifying the board’s response and immediacy). On this year’s version, the inboard and outboard positions remain for the front strap, but the back straps are only provided in their outboard position. For many, a halfway house setup may be the solution – inboard front straps and strapless for the back foot. The real progression of the 180 is in its diversity of application. The extended US foil tracks; carry handles on both hull and deck, and an all-over deckpad – all these tweaks have helped to elevate the Pocket Rocket’s appeal and crossover potential. We didn’t have an opportunity to try it for SUP-foiling, but for wing foiling the 180 certainly succeeds. The E-TECH’s weight is noticeable, particularly at the initial get-go, yet it did little to detract from the foiling pleasure the Pocket Rocket provides.