Louis Morris reports – “Racing got underway on Tuesday at the Raceboard European Championship in Brest, France. Much of Tuesday was spent waiting for wind, but by mid-afternoon, there was a nice 10-14 knots for the 75 raceboards and 16 open division II competitors. With the wind in double figures, Mark Kay (GBR) had really incredible speed, and was leading for a time. However, the wind was already patchy and Nicolas Huget (FRA) and Curro Manchon (ESP) stayed in the gusts to take 1st and 2nd respectively with Mark taking 3rd by a narrow margin ahead of Toni Colemar Torres (ESP), and Louis Morris (GBR). Jeanne Mailhos (FRA) started her championship well, winning the first race for the women, with Annette Kent the first placed brit in 4th place. 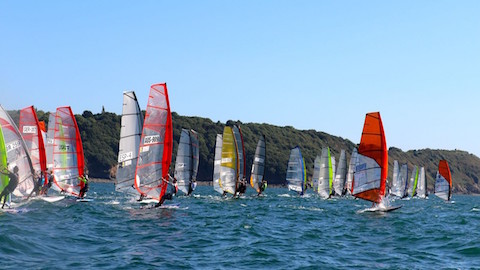 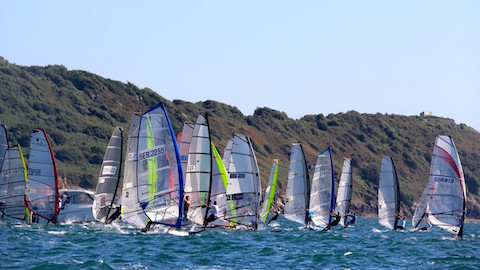 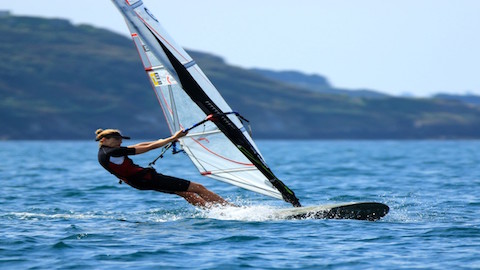 The wind was a little lighter for the second race, so those that managed to find the gusts and stay in them could make very big gains. The start was very difficult with an extreme port end bias, but Louis was one of the few to get a clean start at the biased end, arriving to the windward mark in 5th amongst a close pack with Mark Kay, Lewis Barnes, and Rob Kent of GBR all in contention for the top places. Once again, Nico flew off into the lead, whilst behind him a close battle continued. Louis had very good downwind speed, and managed to snatch 2nd place ahead of Toni and Christoph Boutet (FRA). However, it will be a race to forget for Louis, who was disqualified in a protest hearing after causing Christoph to alter course whilst on starboard tack, and although Mark started well, he was unlucky with the wind and lost his speed advantage in the lighter breeze to finish a disappointing 22nd. Rob Kent sailed well, but will be looking to improve his results after managing to collect half the seaweed from le Rue de Brest on his fin! 19 year old Lewis Barnes had a fantastic day, he finished 28th at the World Championships last year, but ended Tuesday in an awesome 6th place. It was a frustrating day for the women, as they started last and had to wait for the men before starting their second race, but the wind had already dropped below 5 knots and it was getting late, so they finished the day with only one race. 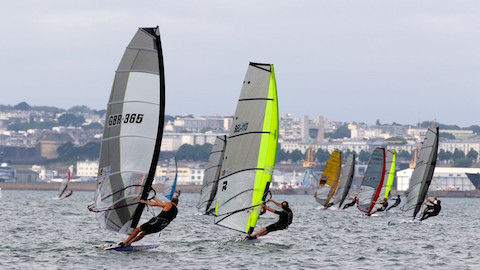 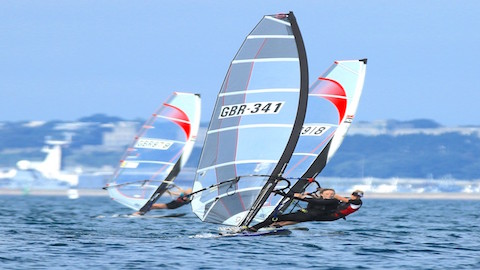 Day two was a little colder, but with a good 8-12 knot NE’ly breeze, the women were sent out first to complete their second race before the men and D2 launched. The course was close to the shore, and with strong adverse tide in the channel, it really paid to tack close to the shore. Jeanne got it perfect and won the race once again. Great Britains Alysia Gibson and Molly Howell also took advantage of the lighter current inshore to finish 2nd and 4th respectively, with many older and more experienced competitors in their wake. The conditions were similar for the men, and the majority of the fleet hugged the shore. Fernando Consorte (ARG) took a different tactic, and headed way left, into the stronger current, but also much stronger wind, and rounded the windward mark in 5th, with Curro, Louis, Christoph, and Nico close behind. Louis worked hard and followed the gusts downwind to take 2nd place behind an on-form Nico. Unfortunately, a thunderstorm quickly developed, and the race was abandoned before everyone could finish, rendering the result invalid. The women also had to abandon their second race of the day for the same reason. With the thunderstorm risk, the race officer postponed racing until the next day. 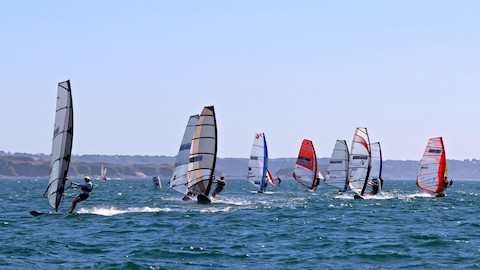 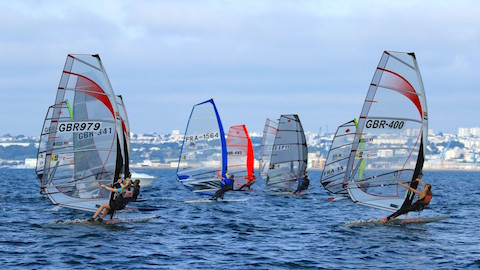 With only two races completed for each class, the pressure is on to complete more races to get a good championship. We’ve had no wind all day today, but we can be sure of some good racing on Friday and Saturday.

Follow the event here and here where you can also find full results, photo galleries, and more.”