This story was featured in the March 2020 Issue of Windsurf Magazine. On the eve of a new decade, a XXL swell marched into Maui’s north shore to give 2 days of extreme windsurfing at Pe’ahi over the 30-31 December 2019 and a memorable end to the year for a lucky few. Robby Naish dusted off his big wave guns and showed he knows this wave like few others, Sara Hauser caught what people are calling the biggest wave ever windsurfed by a woman and Marcilio Browne banged out a crazy top to bottom aerial that is being hailed as one of the best windsurfing rides at Jaws ever. Read on as the talented trio tell us more about their sessions. 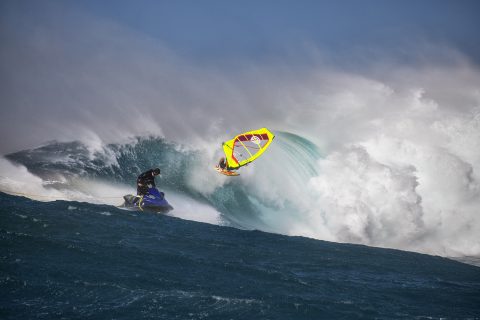 The conditions were really good for both days of the swell. On the 30th I went to check it on the cliff and it was still tiny. At about 2 p.m., a friend and I decided to go anyways to make sure the ski was running well and do a practice run as we thought the main day would be the 31st. Turned out we got there at about 4 p.m. when it was still very inconsistent, but at about 4:30 p.m. it started pulsing very quickly and some bomb sets rolled in. We sailed until about 5:45 p.m. as it was almost dark and we still had to pack up and ride the ski back to the launch site at Maliko Gulch. That day actually turned out to be the best one – super clean waves, not crazy windy and only a handful of people.

I was riding a 5.0 Banzai sail and a special Jaws board that is about 88 litres. My Jaws board is a bit longer/narrower than my traditional Ho’okipa board; it’s 8’0” by 56 cm wide, instead of 7’7” by 57.5 cm wide, which is what I ride on over mast high Ho’okipa days. For safety I wore an inflatable vest.

Hitting that aerial at Jaws was just a spur of the moment decision. I always imagined it would need to be done that way at Jaws in order to make it – when the wave kind of pushes you down instead of up. As there is so much wind going up the face, the moment you get above the lip everything goes out of control. 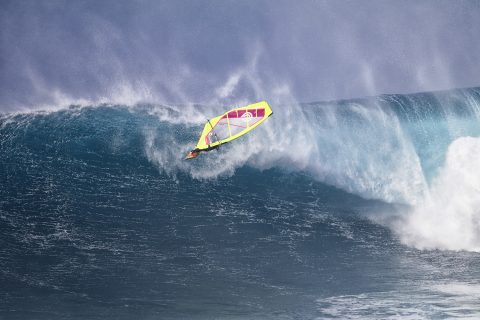 My plan for the day was to stay close to the power source of the wave and try to do some turns in the pocket, but as I was coming up from the bottom turn I felt like I was in a good spot to go for it and it looked ‘makeable’, so almost as a reflex I didn’t think about it much and went for it. It was for sure not something I planned to do earlier in the day. Once I landed it, it was the best feeling ever. I felt so much pressure of the wave pushing back at me; it felt nothing like any aerial I had ever done before. It was a crazy feeling of flying sideways against the wind and at the same time doing all I could not to get backwinded and completely eating it. Kai Lenny and Jason Polakow were right there in the channel as they rode the wave before together and they were both hooting and high five’ing me, I was so stoked!

After that I came home, had one beer with my wife as we watched my son play around and I think we all passed out at 8:30 p.m. I was sooo exhausted from sailing Jaws 2 days in a row straight; those sessions really take a lot out of you. Riding the jet ski upwind, rigging and de-rigging in the water, not to mention all the adrenaline and mental preparation that happens before and during the swell – that all takes its toll. 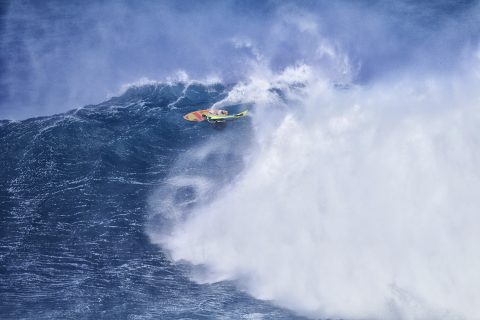 Looking at the forecast for this Jaws swell I had mixed feelings. There had been a couple of ‘false alerts’ this winter with swells that were right at the limit of being big enough to require attention, but they didn’t deliver consistent nice looking waves at Jaws. This wasn’t the case with this swell, it looked solid, we knew it was going to break nicely. The only question was, “how fun is the sailing going to be with a very west swell and some very offshore nuking winds from the east?” In terms of kit, I kept things to what I knew: I used a 4.2 S2 Dragon (4.2 is the biggest size I ever use) because I wanted to be fast and I chose to try my 58 litre asymmetrical custom Tabou board set up as a thruster with MFC custom fins. Regarding safety, 2 years ago I was able to save up enough money to buy a very expensive but much appreciated inflation vest. I also wear a padded wetsuit in case the CO2 cartridges fail to inflate the vest and also to protect my body from impacts. The whole attire feels a bit stiff and big, but I get used to it after a few minutes.

It is so scary catching some waves there. You think you could play it safe, starting on the shoulder, but the wave is so fast and as it walls up the wind blows off the face so strongly that it won’t let you go. You have to start deep and watch the giant west swell wrap the whole ocean around you and place yourself at the peak. It is the scariest thing I’ve ever done and it requires so much control of my mind to make my whole body commit to it. Once on the wave I feel so focussed and in awe with the immense wall of translucent water peeling in front of me. It is such a unique sensation to feel, especially right in front of the mystical Pe’ahi valley. It makes it hard to care about numbers, records, pictures… but it’s nice that these things exist so that we can continue chasing moments like these! It’s also cool to see the impact it has in terms of inspiring other women to go after goals that seem to be reserved for men. 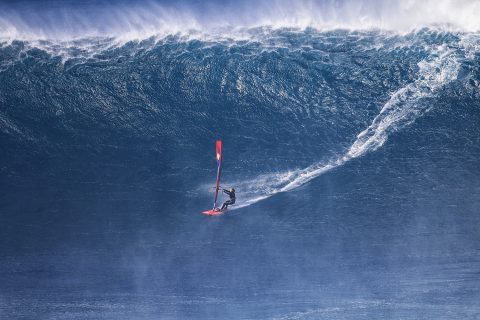 The vibe on the water was awesome! Everybody was cheering each other, it was pumping and there were plenty of waves for everyone.

Having the opportunity to go out there with Marcilio “Brawzinho” Browne is one of those moments that makes me think, “8 years ago when I was at my desk 8 hours a day completing my engineering degree in applied maths and computer science, if somebody had told me that I’d be going out to Jaws with the best windsurfer in the world to ride some bombs…” ha ha ha! Sometimes I feel like we should say, “discover your dreams” instead of “follow your dreams”, you never know what life has in store for you!

Beyond the legend that he is, Brawzinho is a great friend and the most humble guy I’ve ever met. We came back to shore and he vaguely mentioned having the best hit of his life, but he wasn’t too sure. He rinsed his ski, went home to his family and then we all saw the clip of the most insane 12 o’clock under the lip hit on a massive wave at Jaws! I was like “we should have sprayed him with champagne” !!! Brawzinho had just set the bar so much higher on that 2019 New Year’s Eve day! He works so hard every day to push the limits of the sport. I have been his personal fitness trainer for over a year now and I have the huge honour to witness and be a part of his work. Another one of those, “if somebody had told me that…” moments.

That evening I had a simple night, barbecuing around a bonfire with 6 other friends. I made it past midnight, but passed out right after and I dreamt that night of more sweet big waves. 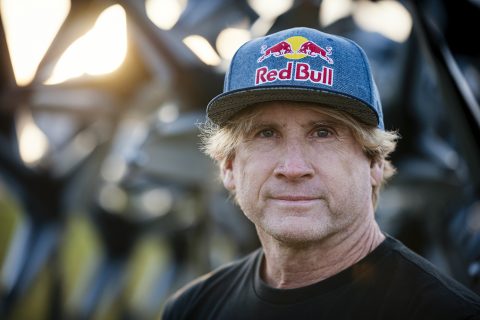 The swell was clearly going to be big and windy, so there was plenty of time to get organized and psyched up to get out there. I organized a boat for the second morning of the swell, along with Michi Schweiger, a young local rider and some photographers. I had not sailed the past few ‘windsurfable’ days over the last couple of winters, so I was excited to get out there and catch some bombs. I knew it would be super stormy and likely crowded, so I put my head in the right space to be ready to charge and not back off. 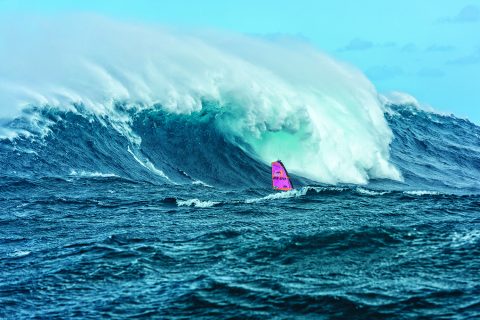 The trip up there from Kahului Harbour was the roughest I have ever had. It was already 25 knots at 9 in the morning, so it was a slow and wet hour plus against the wind. Once there, it was cloudy, easterly winds and raining on and off… and the surf was not really doing much. We hung out for about half an hour waiting for the swell to kick in until I had to get off the boat no matter what was on offer. Even with Dramamine, my stomach cannot handle sitting on a boat for more than a few minutes. Luckily as soon as I rigged up and jumped in the water the first solid sets began to pour in. I stayed out for about two and a half hours until my hands were both so full of blisters that I had to call it a day. It was really windy and bumpy on the faces, so I was out of the harness 95% of the time. I am used to that from windfoiling… where I normally do not use a harness at all… but in the waves, in those strong and gusty winds, my hands took a beating and were both bleeding by the time I got back on the boat. 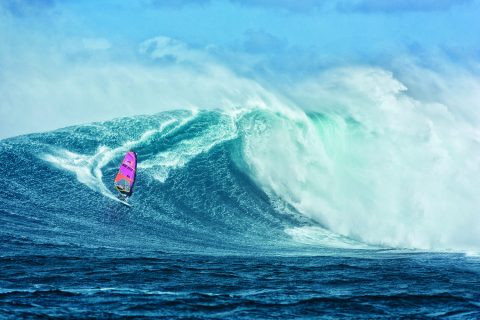 I pulled out one of my old Jaws 9 foot guns for the session. I have four of them with slightly different shapes, and I took one with a really pin tail and soft rails… knowing that it would be the best choice for the bumpy waves that were on order. It worked perfectly for what I like to do…. taking off deep and going fast into laydown bottom turns… and riding pretty safe. I took out a 4.5 and 4.7 but ended up going on the 4.7, which was perfect. I used a Quiksilver Airlift vest, but never wiped out.

I was reflecting on the boat that the first time I windsurfed out there was 24 years ago…. which I think is pretty cool. It was fun… though I was a bit surprised at just how nervous I was. It is funny that as you get older, self preservation subconsciously seems to kick in whether you like it or not. I had a blast… and surely would have been much more relaxed if we had several days in a row out there… my hands were done for a week after that single session! I got a couple of the bigger waves of the day and enjoyed sharing the stoke with the crew.. and was really happy that it never got too crowded!