Robby Swift recounts a strike mission to the southern shores of Ohau, Hawaii, and its iconic wave sailing spot of Diamond Head, in the company of Marcilio Browne and Ricardo Campello. 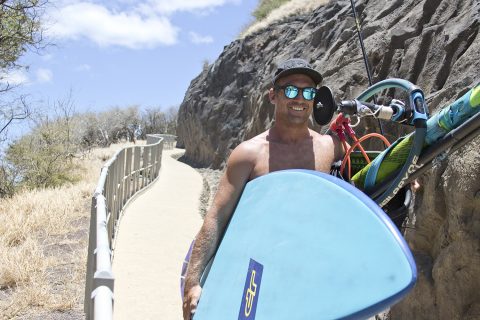 Heading to the break

Well here we are in 2021, the Corona pandemic has affected everyone’s lives and windsurfing and windsurfers are by no means the exception to that rule. There have been many hardships for everyone. Financial stress and mental health have been key topics all over the world. Many people have been separated from their loved ones for extended periods of time and we have all felt the freedom that we are used to being restricted in some way. Here in Hawai’i, we have been lucky enough that our islands are small and isolated enough to be basically shut off from the rest of the world by strict entry restrictions imposed right from the beginning, which left us feeling like we were in a kind of ‘bubble’. Gatherings have been restricted, tourism completely ground to a halt, but families have been able to stay together and solo outdoor activities have not been limited at all, so for the physically active population of Hawai’i, the sports and adrenaline that we all live for has not been limited and I can truly say that we are all immensely grateful to the local government for their decision to allow us to continue to surf / windsurf etc. throughout this time.

I’m writing this article at a time when our lives have been forced to take a slightly different path to usual. Myself, Ricardo Campello and Marcilio ‘Brawzhinio’ Browne are 3 people who have lived and breathed competition and training for the best part of the last 20 years, and though I am sure that it sounds funny to some, there will be many people reading this who understand that it feels weird to have your driving force in life altered abruptly. We are great friends and enjoy spending time with each other on and off the water, but the yearly PWA contests are our focus from the moment we wake up, till the moment we go to sleep, and have been since the early 2000s. 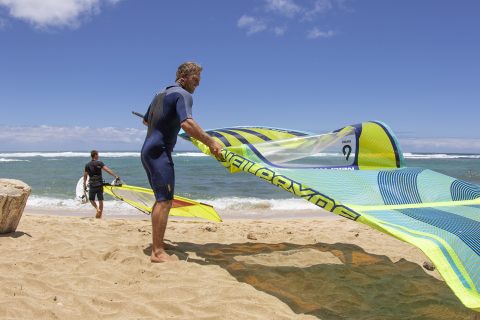 So what to do in 2021? Follow our normal migratory pathways to competition spots, despite the fact that there are no contests this year or doing things that we don’t normally get to do due to our summer commitments?

I personally have a nice bucket list of places I would like to visit to windsurf when the conditions present themselves, many of which are difficult to get to at the moment, but some are very close to home here in Hawaii. The first and most obvious one away from Maui was Diamond Head, one of the most iconic windsurfing locations in the world, and actually home to most of the progressive wave sailing that went down before Ho’okipa somewhat stole its thunder. 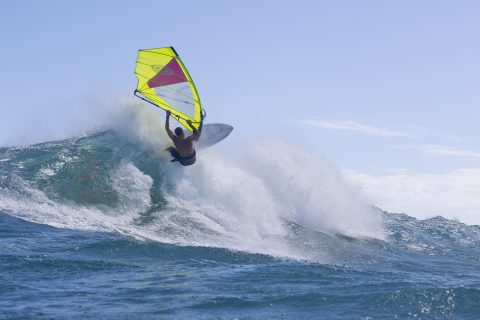 Marcilio Browne had been in contact with Scott Carvill who lives in Kailua quite a bit over the last few months, waiting for a day when the conditions would merit taking the plane across to Oahu and we were excited to get the text that it was going to be good for 2 days in a row. We are pretty on it with the wind and swell directions we need for the various spots we have on Maui, but much less so for Oahu, so it was great to get Scott’s insights.

We booked our flights to leave at 7:30 a.m. and got there with plenty of time to spare. The TSA inspectors took about 45 minutes to arrive and an alarm went off on Braw’s board bag because he had 2 brand new boards in there, so they took every footstrap out and inspected them all, every mast and every extension. Finally they let us go to the gates and we were faced with a mammoth line to go through security. I had my drone in my hand luggage bag (luckily because our videographer crashed his into Ricardo’s sail and drowned it about 20 minutes after we arrived) and of course, the TSA people had to pull it out and inspect it. Braw, Ricky and Diana (Ricardo’s fiancé) all left to go to the plane and were calling me on the phone to hurry up, but they took their sweet time and by the time I had my bag packed back up and had run to the gate, the doors were closed and we missed the flight. Not ideal since we had paid over $3k for photographers and videographers for the 2 days and they were on their way to the spot already. 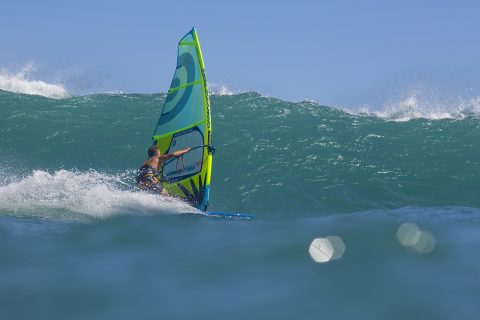 They re-booked us on the 10:20 plane, but it was then delayed and we didn’t end up landing till 12:30. While sitting on the plane on the runway, we were watching the Surfline cameras at Diamond Head, seeing people sailing in logo high waves and getting texts from Scott and our photographers that the swell had arrived and the wind was up. We watched all the old Diamond Head videos – parts from RIP and various other videos that we could find. Amped up to the eyeballs and about as frustrated as it gets, we needed to get off that plane.

Luckily Ricardo’s uncle has a small fleet of rental cars on Oahu, so we didn’t have to wait in the famous mammoth lines that you usually find at Hawaiian rental car agencies, and we were on our way pretty quickly.

Arriving at the spot, at the top of the Diamond Head lookout, it was almost a bit of an anti-climax. The sets were good, but few and far between, and the wind was pretty light for 5.0. We saw Scotty get a couple of nice bowls though, and we had the film crew there, so we packed up our gear for the hike down the hill and got rigged up. 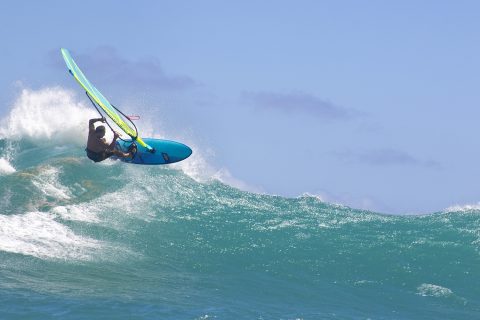 Robby off the top

Any time you sail at a new spot it’s a bit nerve-racking. I had sailed here once before about 10 years ago and didn’t get many good waves, so I was eager to get some retribution. Alex, our filmer and long time local of Diamond Head, gave us some tips. There are some rocks to watch out for on the way out and just a little channel of sand to launch from off the beach, and then once you are out there, you have to pick the waves that come in looking like they are going to close out as they give you the steepest walls to turn on. The bigger ones are best, at least on this swell size (around logo to mast high in the sets), because they break farthest out to sea and don’t end up right on the rocks.

ORIENTATION
The first few waves we were all a little tentative, just trying to get our bearings and make sure we knew exactly where that nasty rock outcropping was at the end of the wave. Once you get orientated, it’s not too hard to either kick out before them or straighten out and sail in upwind of those rocks to tack and then go out through the break more upwind. 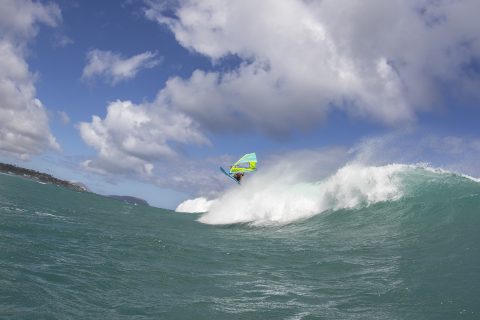 Sailing with Braw and Ricardo is great. They are always pumped up to improve their technique and Diamond Head is a great place to be able to see your friends ripping while you sail back out to sea. I think we were all a little embarrassed with our positioning and timing for the first half an hour or so as it’s a very different wave to any of the spots we sail on Maui, but as we got into it, the smoothness and steepness of the waves gave us plenty of opportunities to push our boards as hard as we could through some turns and aerials. 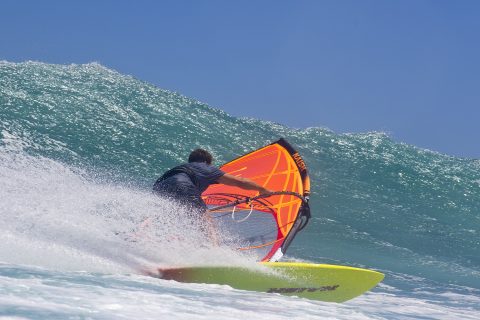 It was really great to line up with Scott Carvill again too. He was one of the most stylish wave riders back when he was competing and still keeps his skills finely honed. He has some boards with narrower outlines than we all use and has a really defined vision of how he likes to sail, which combined with his intricate knowledge of the wave there, makes him a standout sailor and we all got inspiration from how hard he was turning and how powerfully he could come up under the lip and redirect out into the flats. He doesn’t like doing aerials, but prefers to hit the lip as hard as he can to do surfing style cutbacks, something that requires precision timing and 100% commitment. Braw Ricky and I were all extremely impressed with his style and did our best to emulate his approach to the waves. It was really fun to concentrate on pure wave riding, no goiters, 360s etc., just really turning as hard as we could. 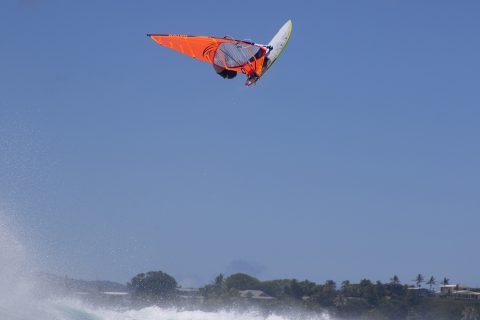 We packed up after about 3.5 hours of sailing on the first day, despite the late arrival due to missing our flight, and went back to Scotty’s house 4 very happy campers. Scott invited us for dinner at Maui Brewing Company in Kailua and we talked story about the ‘glory days’ of windsurfing. His trips to Cloudbreak, his favourite places to windsurf and surf in Hawaii, board design, technique etc. It was great to see someone who hasn’t been actively competing for so many years, still so in tune with everything and so pumped up on windsurfing. Granted he doesn’t punish himself trying to learn different types of loops like we do for the tour, but he is still just as critical on himself when it comes to wave riding and super interested in board, sail and fin design. 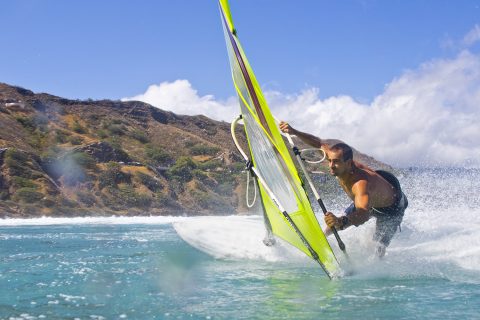 Day 2 had some slightly bigger waves and stronger wind. We were even more fired up to try to get some good shots for our video / travel story, so we got onto the water around 12 and sailed on 4.7 fully powered for another 3.5 hours. Jumping is hard there as the wind is pretty offshore when you get to the wave, but it was nice to focus almost entirely on wave riding for another day and not have to endure any of the slaps that often come from double forwards. There were plenty of good sets that day and we were all feeling a little more comfortable, so we could go for it a little more. I had an awesome time and this day was the cherry on top of a fantastic 2-day trip to Oahu.

We pushed it too close of course and almost missed our flight home, especially when Ricardo’s van wouldn’t start for a few minutes after we stopped to refuel on the way to the airport, but Robby the mechanic was able to get it going again ha ha. 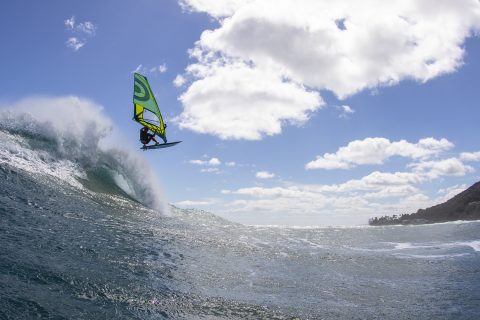 Swift flying through an air

All in all, it was brilliant to leave Maui again after so long, and to visit such a fabled destination, so close to home. It definitely rekindled our travel bug big time. I have a great little crew of friends to travel with and we are putting our heads together to see where we can go next to tick spots off our “dream destination list”. It’s quite a list, so keep watching this space for our next adventure together!

Finally I’d just like to say a massive thank you to Scott Carvill for hosting us. Without his insights on the conditions, we would never have been able to score such a precise strike mission and it was amazing to stay at his house and catch up after such a long time.