Pre lockdown, Bastien Ramery, Jules Denel and renowned photographer, Jérôme Houyvet took a trip out to Madagascar to visit the Emerald Sea, a pristine lagoon at the entry of Diego Suarez Bay. The origins of its name are obvious with its paradisiacal water colours, but what about its windsurfing? Read on to find out how they scored in this Emerald Paradise! 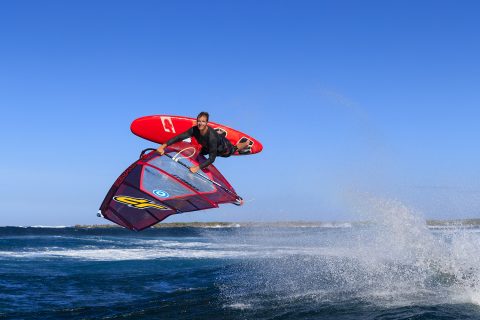 Bastien Ramery: This trip got off to a good start – two windsurf bags checked in for free instead of only one, a priority access to avoid a thirty-minute wait to board and free car parking! Since our arrival at Paris Charles de Gaulle airport, we knew that the planets had aligned, and it turned out they would stay that way during our entire Madagascar trip.

After a ten-hour flight to Antananarivo (the capital of Madagascar) and a two-hour domestic flight, which we spent admiring the thousands of glowing red hills, our plane landed at Diego Suarez, a city in the far north of Madagascar. Nicolas (Nico) Martin, the boss of Babaomby Island Lodge, who organized this trip, was waiting for us on the tarmac. Fourteen years ago, Nicolas organized the famous “Windsurf Challenge” with Baptiste Gossein. In love with this spot, he took on the crazy and ambitious challenge twelve years ago to build a windsurf club in the Emerald Sea. 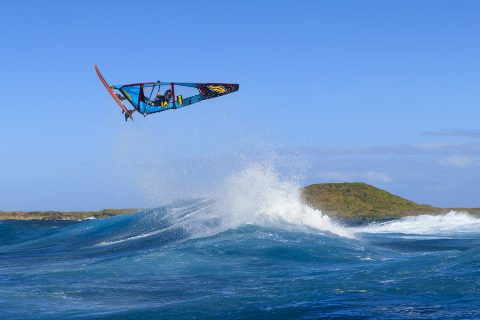 We quickly unpack and make a quick visit to Diego Suarez before the last, but by far the most magical and exciting part of the trip, the part which connects Diego Suarez’s port to Babaomby Island. The small port is located in front of an open-air slaughterhouse for zebu (humped cattle). Zebus are a national emblem in Madagascar, along with the baobab (a type of tree) and lemur. One thing’s for sure, you’re better off being a cow in India than in Diego Suarez! 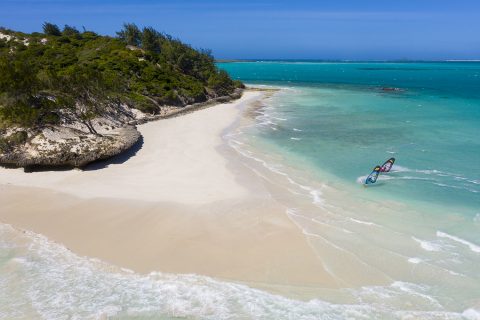 The eight-metre boat is a traditional Madagascar design, we hoist the sails, even though it’s 35 knots. We experience a total change of scenery and an amazing sensation of escaping the “modern” world for an adventure. Jules’s phone doesn’t survive the trip, the sea spray got the best of it. We all end up like Jules in a way, since Wi-Fi and a phone network are almost non-existent on Babaomby Island. We send one or two WhatsApp messages a day. All our opinions on this social network-free experience are the same: we feel alive again.

We get out of Diego Suarez Bay and enter the famous Emerald Sea. Our European eyes, used to brownish waters, are thrown off. The turquoise lagoon is endless, and we cruise through it on the strong, steady winds. 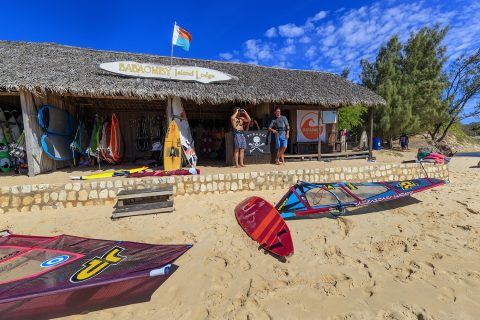 We have arrived in what we will call in a few days, the “Windsurf Paradise”. It’s a spot which would surely be a ‘Mecca’ like Maui or Tarifa if it were easier to reach…but should we really complain about its accessibility?

Nicolas has managed to build simply, elegantly and intelligently, all while respecting nature…it’s outstanding. We take a quick tour of the lodge and start eating. In Babaomby lodge there is only one very long table where everyone eats together. This concept of friendliness and conviviality, sadly often forgotten, allows us to meet interesting and friendly people. The majority are kitesurfers; after a few days of watching us sail, one of them envied us and joined us to windsurf “like in the old days”. He admitted at the end of the week that nothing will ever replace windsurfing, it was a small victory! 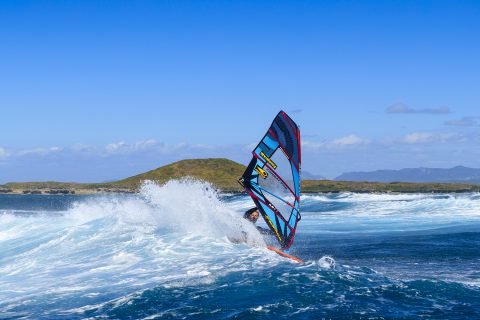 After lunch we headed out for our first session, we put on our board shorts and rig 4.0 m sails! We bust out a few tricks next to the lodge to get back in the game and quickly cross the three-kilometre lagoon to see what this spot is really like; Turtles guide us on our joyous way!

We go around the Diego Suarez islet and its white sand beach and get out of the lagoon to find surf. Waves are rolling in, two metres high and an easy channel at the end of the wave: it’s blowing thirty knots side-shore, and there’s just three of us in the water. The Parisian highway where we were twenty-four hours ago is far from our minds, and the fatigue and one-hour jetlag won’t get the best of us. We celebrated our magical day in the lodge’s new bar that night. Warning, even though all days spent in this part of the Emerald Sea are magical, they shouldn’t all be celebrated, unless you like hangovers! 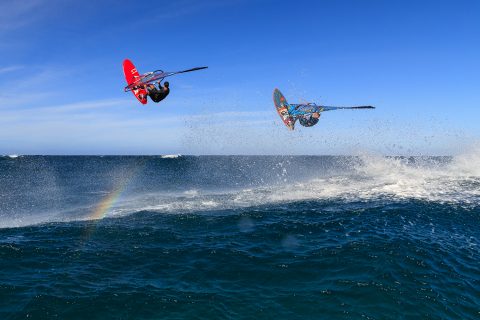 Early in the day, we are woken up by the sound of waves, which are two metres away as the crow flies from our bed. At this time of year (June), the wind grows gradually during the morning to reach its peak around two p.m. During the summer (June, July & August), the average winds are around thirty/forty knots. Diego Suarez is always ranked in the top ten for its wind statistics on Windguru.

The world’s best croissant is not from France but Madagascar. Here, everything is homemade and sourced locally, from peanuts to jam, and not forgetting the fish caught two hours earlier. But the most amazing fact is that everything is cooked on a wood fire and not with electricity! The lodge’s chef is amazing and brings diverse and tasty cuisine to the table.

Bellies full, we leave the lodge to discover the jumping spot off the Torek islet, 500 metres south of where we were the previous day. The wave is weak, so difficult to ride, but perfect for jumping! The long period between the waves and their weakness enable anyone to evolve and grow comfortably and without stress, whatever their level. After ten minutes of riding next to the shore, we end up in the more “hardcore” spot, where we were the day before. We enjoyed some more quality wave riding, with waves slightly weaker than the day before but still fun! The lunch break organized by Angelo and Jean (the windsurf/kite instructors of the lodge) takes place on the beach of Diego Suarez islet, welcome to paradise! 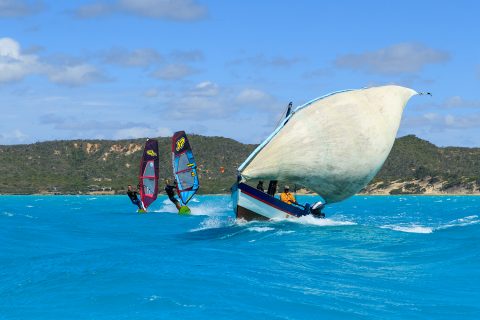 The following day is led by freeride and the exploration of the lagoon. The “Babaomby Lodge” boat leads the way, its mainsail punching into the sea in a thirty-knot wind, with windsurfers playing around it! We are heading towards Nosy Antaly Be, the lagoon’s western isle, off the coast of the baobab forest and our mission is to discover the sand peninsula of the isle’s extremity. We then climb up to the famous “pool”; ever since our arrival, we’ve heard about this place as the most interesting in terms of water colour, which was hard to imagine given the fact that the lagoon was already clearer than pure water! But the amazing natural colour of the pool was worth the trip and lived up to our expectations! We stay there a few hours windsurfing, doing a bit of freestyle, but on our way back at the end of the day we spot huge waves breaking on the reef. We didn’t know at the time that this was a glimpse of the swell we would get the next day, making it an even more memorable experience.

When we got back to the lodge, we headed out walking to the ‘Red Tsingy’ an hour away, these are famous cathedrals of red sand which probably inspired Barcelona’s Sagrada Familia. The evening light highlights the laterite rocks, explaining why Madagascar’s nickname is the ‘Red Island’. This sight blew our minds. 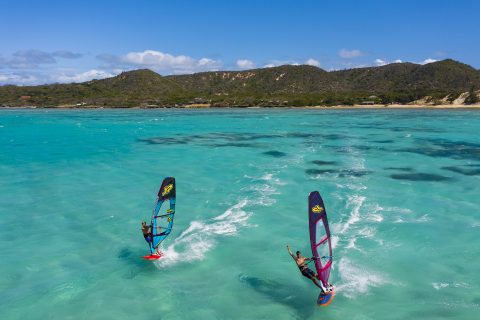 Madagascar had already astonished us, but it was just the beginning, this 4th day will stay forever in our minds. As always, we had a steady wind, but this day brought a heavy swell and the main spot was on fire. The lines are spaced out and the biggest sets offer us some mast high ones. We are living our best life! The only way we had imagined wave sailing in Madagascar was the jumps we had seen pictures of during the Windsurf Challenge event thirteen years earlier. We didn’t know it was possible to have such quality waves to ride as well! It was a session we would remember all our life! The swell, the wind, the landscape, the friends, the context, the freedom! Today though it’s crowded – we are 4 on the water! Nicolas Garnier, a French expat living in Diego Suarez to live out his passion for windsurfing joined us for the occasion, and Nicolas Martin, the boss and a windsurf fan since always, enjoyed the session with us too, Nicolas never tiring of his home spot! The waves come endlessly, it is mission accomplished and we were lucky to see the Isle of Suarez’s waves at their finest. 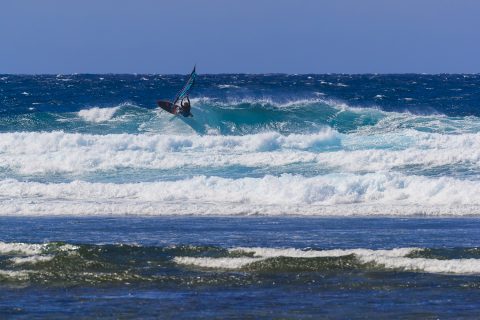 With a last warm-down session (some of us kitesurfed but we will not expose their identity to respect their privacy!) and we leave Babaomby with a feeling of sadness mixed with joy to have had such an extraordinary trip. The sunset aboard the Babaomby boat was sublime and the hour and a half of sailboat journey to arrive in Diego Suarez allowed us to ease back to reality.

We spend our last day in Madagascar visiting the Montagne d’Ambre. On the old roads, most of which date back to the colonial era, we come across abandoned military buildings of the French army, basketball courts overrun by nature and forgotten magnificent colonial houses … it’s like an open-air museum! 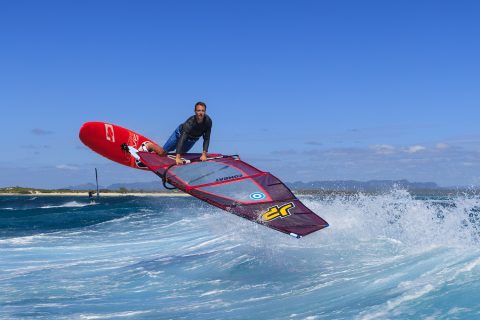 We hike up to a forgotten waterfall, which according to our guide, hasn’t been visited for the past 3 years! The farther we go, the more tense we become, there’s killer bee’s nests, massive spiders, steep paths… but thankfully, swimming in the waterfall at the end was all worth it.

We will remember from this trip the incredible Emerald Sea spots, that cater for whatever your level or discipline of windsurfing, as well as Nico and his entire team’s incredibly warm welcome in their extraordinary Babaomby Lodge and of course the joy of the locals day in day out despite their poverty (Madagascar is one of the world’s poorest countries). We will be back, we know it! 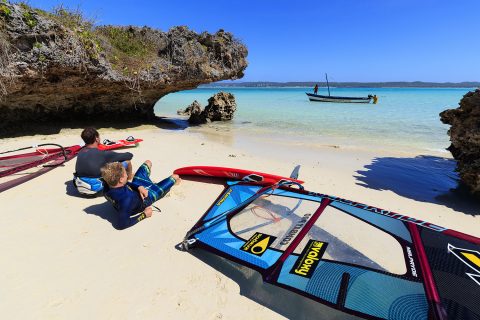 Trade winds arrive in April and blow non-stop until the end of November between twenty and thirty-five knots every day; most used sail is 4.7/4.2. The sailing is starboard tack, easy and accessible for all, whether it’s freeride or wave riding.

The Isle of Suarez’s wave spot near Babaomby lodge works again with winds from April to November and the best waves are from June to October.

Recent kit from JP/Neil Pryde is available at the Babaomby Lodge for rent. You can also rent kites, sups, kayaks, fishing materials and underwater hunting material at the lodge.

If no wind, you can also go on nice walks to discover the baobabs, the Red Tsingy or observe humpback whales in August and September.

All transfers from the airport to the lodge are taken care of, it’s also full board, so you only need to buy your plane tickets.

It’s a ten-hour direct flight from Paris to Antananrivo with Air Madagascar, followed by a two-hour flight to Diego Suarez.

There’s no need to worry about a visa before your trip, you pay it on arrival and it’s €31 to be paid in cash. No vaccines are necessary.

For more information check out the Babaomby lodge’s website – www.babaomby.com.

« 125L FREERIDE / FREERACE BOARD TEST 2020
BACK ON THE WATER: MATTEO IACHINO AND ANTOINE ALBEAU »