Windsurf MagazineFEAST FROM THE EAST: THE BIG FREEZE

February 2021 saw the UK’s lowest temperature since 1995 being recorded in Braemar, Scotland, where it got down to -23.0 °C! But alongside the freezing temperatures, the month brought a rare combo of east winds and a monster south swell, which was enough to tempt Ross Williams and Timo Mullen to brave the elements at Kimmeridge and the Isle of Wight; From our May 2021 Issue they tell us more about their sub-zero sessions.

Timo Mullen – “Windsurfing and surfing during lockdown has been a bit like pushing blocks of ice up an icy hill! We moved to a new house last year to live closer to Kimmeridge Bay, but one week after moving the UK went into a full lockdown. Since then, access to Kimmeridge has been quite restricted. The access to Kimmeridge is on private land so the estate that owns the land closed the toll road to all vehicles to help protect the small local community who live at Kimmeridge. This meant the only way to access the breaks at Kimmeridge was to either come in by foot, bike or by boat, all these options involve a big effort, especially with windsurfing gear. Throw into the mix it has been a pretty cold winter and going windsurfing has suddenly become all but impossible! GET ON YOUR BIKE

I have never been one to let obstacles get in my way and like to rise to a challenge! Kimmeridge is a special place and the fact it is now only fourteen minutes from our house makes it my closest beach, so I had to think outside of the box if I was to windsurf there this winter! A few years ago, I joined the e-bike revolution, yup I hear all the die-hard cyclists tut tutting, but truth be told I hate cycling! I find it boring and my Lycra fetish is equal to my sticking nettles down my pants fetish, so yeah anything to make cycling more appealing then sign me up! But I have hardly used the thing and until recently has made an amazing wetsuit rack! But with a bit of searching on ebay I found an inexpensive bike trailer that looked sturdy enough for all my gear and paired with my e-bike I now had a new Kimmeridge taxi! My first attempts at riding the bike with trailer were all good. It was easy thanks to the electric motor on the hills; it did take a while to load up securely, but once loaded it was fine. The only drawback, which is something you wouldn’t normally moan about, was there was nobody else down at the bay! 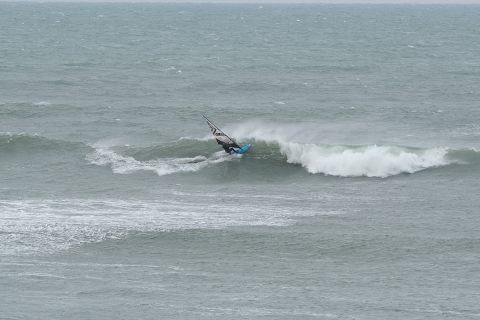 Hitting the lip at K’Bay

Fortunately, there has not been too many epic Kimmeridge forecasts during this lockdown so despite having the means to get to the beach I was not exactly rushing to sail on my own, for safety and social reasons! I decided that if I was going to go there, it would have to be an epic forecast to warrant the hassle involved. 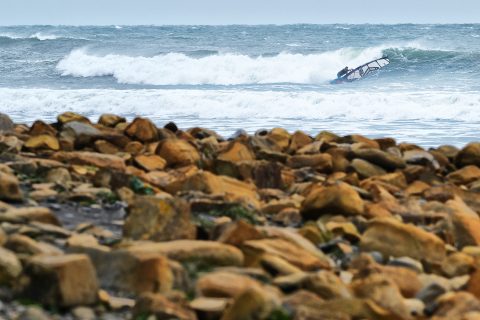 And sure enough, an epic forecast came up for Kimmeridge – a pumping SW groundswell and rare port tack cross-off winds; the sort of forecast you wait all year for! There was only one slight downside, east winds in winter in the UK usually mean extremely low temperatures and this day was looking freezing; -5.0 °C plus the wind chill on top! As these days are so rare I had to put the temperature out of my mind and focus on the epic surf and wind!

On arrival it looked like it was pumping. I had packed everything to make the cold more bearable – my Dryrobe, my 6/4 wetsuit, a fleece, gloves, my hot portable shower (check my Instagram for more on that!) and of course a massive dose of “Man the f*** up!” I was already freezing from the cycle ride in, so when I arrived at the beach I was already struggling. Plus, it was only 9 a.m. as the wind was forecast to drop later in the day, so I was heading out at the coldest time of day! But seeing the first logo high sets explode on the reef soon warmed me up mentally, even though I was rigging up beside ice-covered puddles! 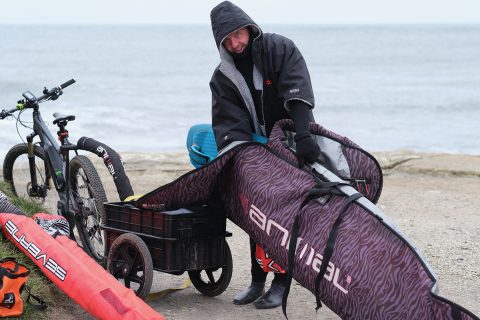 Rigging in the cold

I opted for gloves obviously, but as normal with gloves after ten minutes my arms were cramping up and my hands were still freezing! So I stuffed them down my wetsuit and just got stuck in! There is a point of pain that you just must go through in winter that once surpassed, the cold burning pain goes away! After going through that threshold I was fine with no gloves for the two hours I was windsurfing. 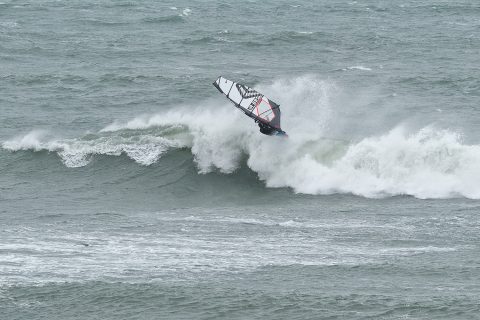 The conditions were firing – logo high and I was on my Severne Blade 4.7m and Severne Mako 91, but the weird thing was my brain was working in slow motion because of the cold. It was hard for my mind to focus. Sailing in these extreme low temperatures is not only a physical extreme but also a mental one! After a few hours of blasting airs and carves, the cold got the better of me and it was time to head in to what I already knew would be the worst part of the day – the thawing out of my hands!

Yep, we have all been there, the torture chamber called the reheats, when the warm blood starts to creep back into the tips of your frostbitten fingers! It is hell and I would say this was the worst I have ever felt. I will give it a score of 10/10 for pain! Timo on his way to the office

So, was it all worth it? Obviously, I would say yes! The satisfaction and sense of achievement in sailing such weather extremes is the same as any other extreme windsurfing challenge like sailing big waves or taking on nuclear winds! Battling the elements brings out the ‘Scott of the Antarctic’ in us all, but this day in particular with all the elements and the bike ride surely made it one to remember!” 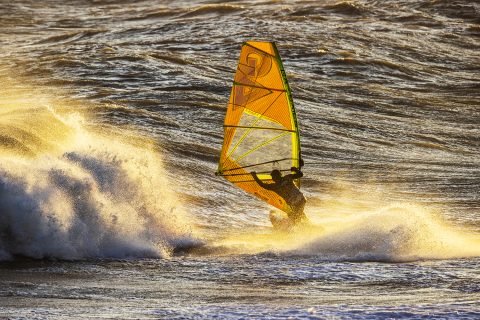 Ross Williams – “It was close to the limit of what I would go out in temperature wise at Ventnor, but the conditions were too good to let go and it was sunny with this amazing wintery low light. Two days of howling east winds had kicked up a solid swell and it was firing but extremely cold. I have not experimented with many types of gloves, so I just use the palmless ones as they still give me a decent grip on the boom and a degree of protection from the cold. Every time I have used proper gloves, they have pumped up my arms so much I can’t even sail. It was bitterly cold and on the limits of what I could endure. I didn’t waste any time rigging and figured the quicker I just rig and not procrastinate the better. Keep active…keep warm! After a short time sailing my little finger and index finger had gone completely numb and I could not even feel them; it was verging on frostbite! When I came in they started to warm back up, and when the blood started to pump back in I was in agony with the reheats! 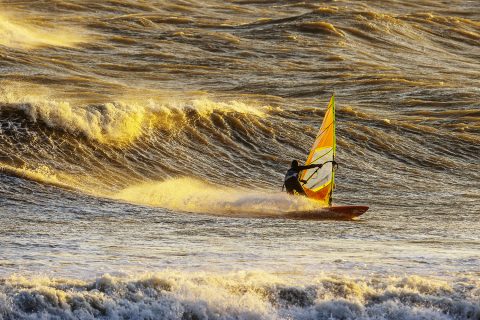 It was a challenge to even consider going out, but the conditions were enough to warrant the pain. Ventnor in an easterly can be epic sailing and I knew it was firing. Once you are out there sailing and moving around then you naturally warm up with the adrenaline. You forget about the cold a little bit. It is also quite a nice feeling when you have come in that you have conquered sailing in these conditions and survived that battle with the elements. I found coming out of the water gradually is best for warming up. If you rush out and immediately try and heat up then you can heat up too fast and get those awful reheats! At Ventnor as I waded through the shallows on the way in I was dipping my hands in and out of the water and blowing on them. I was slowly bringing my hands back to life! I felt like that saved me a little bit. Even so, I still had some pain in my hands. Obviously standard for me these days is having a dry wetsuit, boots, gloves and hood before I go out. I try and stay warm while I am rigging and get changed in the warmth of the van. It is easy for your hands to go numb while you are getting changed if you have wet icy gloves and are outside – that is no fun, believe me. I have three or four winter wetsuits ready to go on a good day. I look ahead and make sure I am prepared. Ross hits it in the bitter cold I think I sailed a little bit more conservative to begin with. I knew I was only going to be able to sail for an hour, perhaps an hour and a half so I didn’t want to go for a ‘Hail Mary’ 360 on the first wave and break everything! If I had to come in, most likely I would get cold and maybe not want to go back out. I think you have to build up your bank of moves in the cold the same as in a competition. The cold does limit your ability a little bit. 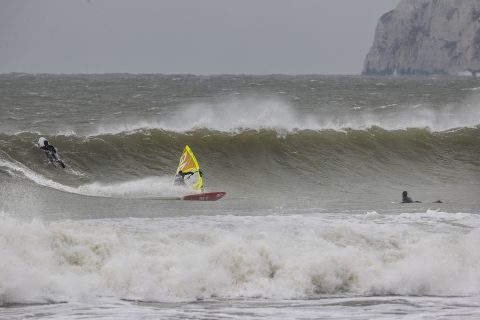 Both sessions were fun, but Compton was a bit bigger with a few big airs to hit. The waves were clean and smooth so I would say that was one of my better sessions of the winter. Port tack is probably my more favourable riding tack because I am a goofy foot surfer. It was just nice to score a few rides with multiple sections. Luckily I landed some nice big aerials, that felt great. It was a rare set of conditions for the island. The conditions were epic with solid swell and good wind. It was just about manageable and worth the burn. My top tips are go to the beach warm, have a warm drink with you if possible, make sure your wetsuit and hood etc. are all dry before you leave home and don’t hang around too much before you go in. You need to stay active on the water and don’t just sail back and forwards. Make sure you catch some waves to help move your body around. When you are physically riding you warm up quick. If you are plodding around you can definitely get cold!”