Puck is a town in Poland that has been known for sailing for decades. It is also a special place for windsurfing, well known to the local competitors, but also host to international events since the days of the Lechner. Now we’re foiling here at the Rehasport Formula Windsurfing Foil World Championships. 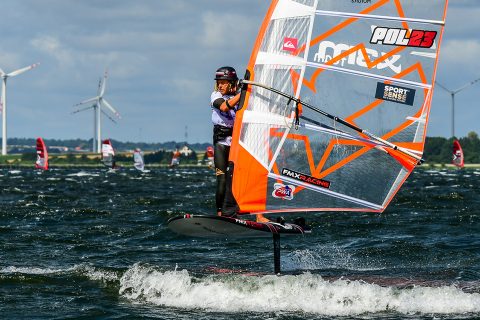 Every race counted and the results changed frequently as the professional windsurfers from PWA competed against Formula Windsurfing champions and Olympic medalists. It was Maciej Rutkowski from Poland and Steve Allen from Australia, who battled it out until the final race.

Although being naturally disappointed with not coming first Maciej was content with how close the racing was – “One point made the difference between being the world champion or not. A little more wind in the race today and we would have made the finish line and I would have won the event, so some great tight racing. I like that. My equipment is set up really well. If I were calmer and had concentrated from the very beginning the outcome could have been different. I overdid it in the first part of the event, my mistakes were the key. I just made too many mistakes to become a world champion. You just have to sail smart.”

Steve Allen on the other hand was stoked with the result – “This is the first time we ever had as many as 21 races for a single discipline at an event. It is amazing for how many chances we have. You cannot do everything right in all these races, but mistakes are the key. Sometimes you let yourself mentally slip and I was happy to come back when it counted. I took the lead then I lost it, I took the lead then I lost it. What matters is being on top at the end. We have a lot of discards, so I wasn’t really caring about my races where I was sixth, but as the event went on, I made some stupid mistakes and thought that I should have been caring about each race and pushing all the way to the end. At the end it turned out well and I’m very happy. I’ve been so close to world titles since 2009 and I didn’t have anything until 2018, when I won at the Formula Windsurfing Worlds and now with the foil. To win the first official title gives me power to continue my career a little longer.” 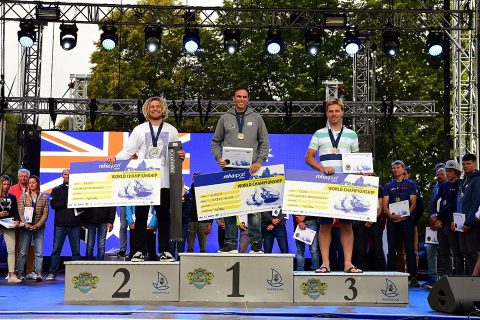 The competition for third place was equally fierce. The two legendary locals Przemysław Miarczyński and Wojtek Brzozowski were going neck and neck with Elia Colombo from Switzerland and Alecandre Cousin from France. It was Wojtek coming out on top at the end. The venue delivered some exceptional races, most of which in well over 20 kts. Some of the younger competitors here have never, ever raced in windspeeds we had. Rarely do you race in 30kts in youth classes, but in Puck it was a daily reality. The main question for foil racing before the event was safety. Will it be safe in a fleet of almost 60 competitors? Will the difference in abilities and equipment be a problem? When will the wind be too strong for racing?

All of these questions have been answered. Foiling has passed the test. You can easily say, that if it would be raceable on the fin it can be done on the foil too.

The future is bright.