Earlier this year, Ross Williams ventured deep into surfer territory and became the first person to windsurf the famous surf break of Freshwater Bay on the Isle of Wight. It’s a rocky right-hander, sheltered from the wind beneath huge chalk cliffs and a tricky place to sail. Luckily for us, John Carter was there to capture the action and tell the tale of how it all went down!

This feature was published in our November / December 2020 issue.

Some breaks are simply off the cards for windsurfing and Freshwater Bay on the Isle of Wight would certainly fit that criteria. It is similar to Honolua Bay in Maui, a quality surf break pretty much sheltered by headlands and usually packed with surfers. A few years ago, Maui all-round waterman, Zane Schweitzer, sailed Honolua on a rare set of conditions, so I guess using that as inspiration you could not completely wipe the possibility of windsurfing Freshwater Bay off the cards. Having said that, I have never seen anybody windsurf the bay or even consider it during my thirty year windsurf photography career and time living on the Isle of Wight. In a west or west-southwest wind, the go-to spot is Niton, which holds a good wave and boasts side to side-offshore wind. In most wind directions, ‘Freshie Bay’ as we locals call it, would either be very onshore and horrific, or sheltered by the huge cliffs that block the wind. 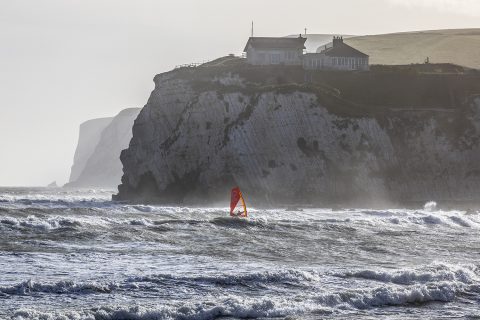 As surf breaks go, Freshwater Bay is the jewel in the crown of the Isle of Wight’s surf breaks and boasts a peeling right-hander beneath the scenic chalk cliffs of Tennyson Downs. Even for surfing, Freshwater Bay ideally needs north winds, a solid groundswell, a low tide and when those conditions all line up it can get pretty busy, if it is not too big. To be fair, I rarely head over to Freshwater when it’s windy, it simply is not on the radar or a spot you would normally consider. 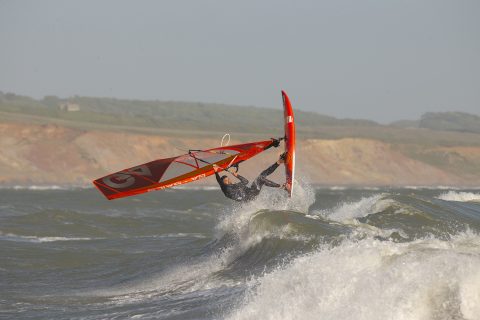 Over the past year or so Ross has been in a Whatsapp group with local kitesurfer Tom Court who rides for Duotone. Tom was brought up in a house that overlooks Freshwater Bay, so he usually knows when it’s firing. Reportedly Tom has kited the bay a few times, but as for whether it would be possible for windsurfing was another matter. One thing is for sure, it would need to be howling windy to even consider sailing the bay. Light winds would mean a tonne of surfers and unless it was blowing at least a force 7 or over, I very much doubted any wind would get in under those huge cliffs. Hitting the lip at Freshwater Bay

After the lockdown was over for watersports, it did not take long for Mother Nature to reward the patient sailors who had admirably stayed off the water for nearly two months with a rare summer storm. Gales and a decent swell were set to provide firing out of season conditions right across the country. With that insane forecast, I knew Ross would be frothing to get back on the water and most likely would be camped out all day at Niton, so I sent a message the night before, to see if he was up for getting some shots. 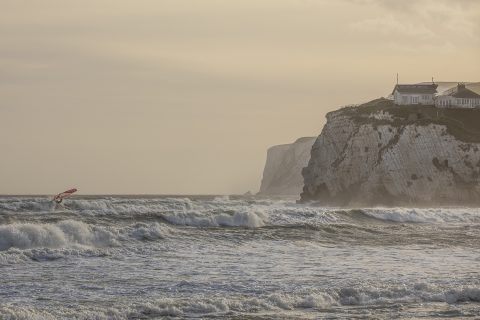 His plan was to start early to catch the outgoing tide at first light, which was around 5 a.m., and he was setting his alarm for 3:30 a.m. I was not quite sure if I was keen to go that early, but made sure my gear was packed and ready to go if I got an early message in the morning. At 5:30 a.m. my phone beeped with a message to say Niton was not good and Ross would try again later and message me if it turned on. I waited patiently for the call, but heard nothing by 1 p.m. in the afternoon. Then a message came through that Ross had scored Niton but had forgotten to take his phone…doh! It seemed like the day was done and dusted for me and I might as well make other plans. Then at 4:30 p.m. I had another message to say Ross was heading back to Niton for a second session. I was on the verge of not bothering, but decided I had nothing to lose and re-packed the car and headed over. By the time I was at Niton at the bottom tip of our diamond shaped island, Ross had already been and gone! 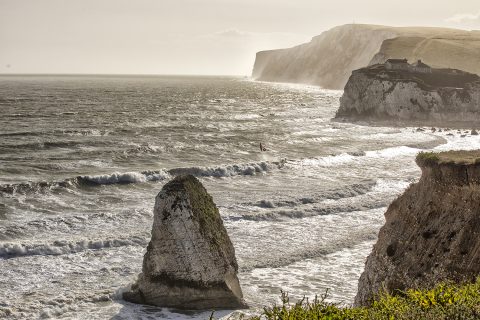 The next message was a bit weird – “Niton looked good but I am going to try and sail Freshwater Bay for something different!’ I have known Ross for probably twenty years, but never heard him mention sailing Freshwater Bay once, so this was certainly a first. I was actually not sure if this was some kind of joke or stitch up, but decided to continue driving all the way to the very western tip of the island. As I drove up ‘Military Road’ on the west side of the island, I could see it was howling windy with plenty of swell, but looked pretty onshore as I worked my way towards Freshwater. By this stage I had no expectations at all that I would be shooting any shots and that this rare summer storm had slipped through the net.

The town of Freshwater and its bay are one of the most picturesque beaches on the Isle of Wight. At the bottom of the chalk cliffs are caves which are exposed at low tide, which according to local history smugglers used to use. There also used to be an arched rock on the left-hand side of the bay, but it collapsed during a big storm in 1992. The downs to the right of the bay are named after the landscape poet Alfred Lord Tennyson, a famous British poet from the Victorian era who lived in Freshwater and roamed the downs for his inspiration. Back loop in front of local kiter Tom Court

‘Military Road’ takes you past popular surf beach Compton, before working its way up and over the white chalk cliffs that approach the tiny village of Freshwater. Up over this hill you get an amazing panoramic vista of the sea and down below I could see solid lines of swell marching towards the rugged coastline. marching towards the rugged coastline. A few minutes later I was at the reveal where you got to see Freshwater from the top of the hill as you descend down into the narrow bay. I could see Ross’s van stationed at the front of the small parking lot in front of the Albion Hotel, but more importantly I could see his bright red sail heading out through the water towards the waves. The first two things that struck me were that it was a very low tide, and also the wind looked just slightly side-onshore, and despite being a bit light on the inside, Ross had plenty of power once he was just behind the waves outside the bay. 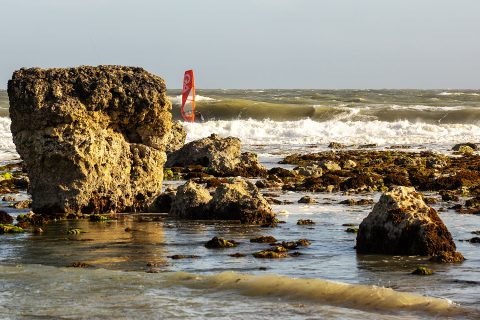 Danger on the inside

With Ross flying around catching waves, I scrambled to organize my equipment, knowing this was something pretty rare and that I would probably not get the chance to shoot a session like this for years to come. Not only is Freshwater Bay an iconic surfing wave, it is also in an area of outstanding natural beauty, nestled in a bay between the huge cliffs of Tennyson Downs. So, to capture the session, I was already thinking that the shots needed to show the location just as much as the action. Obviously with the cross-onshore wind blowing in the bay, the wave was not looking beautiful like it does on a classic surf day, but still with blue skies above and the incredible backgrounds it was still looking very special. 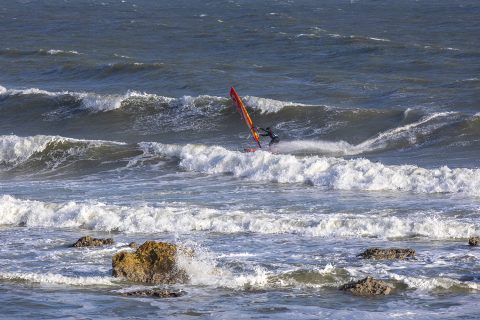 FIRST TIME
I decided to shoot from the rocks on the right-hand side of the bay to kick off with, and a plan to dash over to the cliffs on the left-hand side to grab some wider scenic images later on. Tom Court was also on hand with his kite and joined Ross on the water to grab a few waves. The tide was on its way in as the session developed and I could tell it was becoming trickier for Ross to navigate out of the bay with the wind shielded by the cliffs. Out the back there was still loads of wind and Ross was able to catch plenty of waves on this inaugural windsurf session in the bay. Meanwhile I was charging around like a man possessed trying to capture as may angles as possible of the windsurf session in this awesome location. 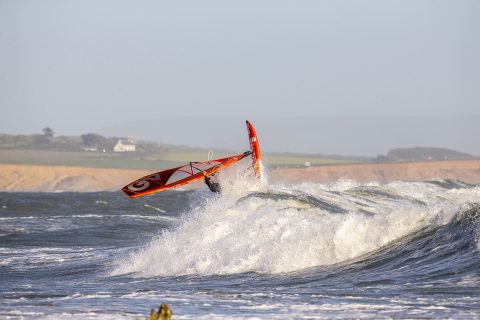 Finally, Ross was done after a sweet session in this new spot, having clocked up plenty of waves and discovering the potential of this right-hand surf break as a windsurf option. An outgoing low tide would be ideal if we ever get another chance and of course a bigger swell, but for now we settled for the opportunity we got, especially after all the frustration of lockdown! 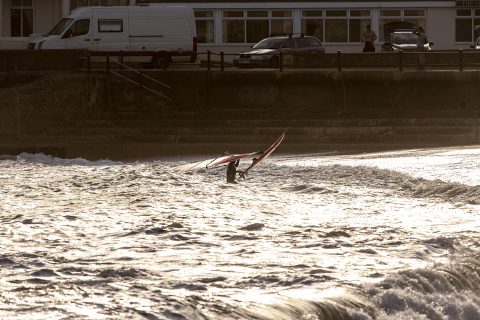 “I thought the bay was sailable, but suspected the angle of the wind would be too onshore. In a west wind, Niton at the bottom of the island is my ‘go-to’ spot! I knew Freshwater would be nice for photos, but it would be difficult to sail. On this day, the wind was dead west, so it was coming perfectly down the cliffs. It was actually consistently windy, but a little onshore so not the ideal direction for perfect wave riding. It was a wind swell really, so who knows with a proper groundswell. It is a place where you need to dial in your timing and maybe sail it on the dropping tide to make the wave punchier. It was still surprisingly good fun. I am fairly sure I am the first person to wave sail there. I definitely will be back there if I see that forecast again. It is a nice option to have on that forecast. The scenery there is amazing. The white cliffs are really dramatic and there are so many angles to shoot from. The sailing is quite technical as you are quite close to the rocks. I was on an 88 litre Tabou Da Curve and a 5.2m IQ Wave, but I would have preferred the 96 litre Da Curve to keep me going through the lighter patches.”