I am a currently a university student, so when purchasing windsurfing equipment, price is often the deciding factor. This leads me to spend a considerable amount of time sifting through the online second-hand market via the mediums of Facebook marketplace and eBay searching for sweet deals. 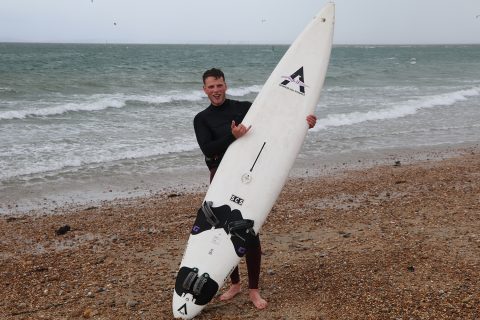 After some particularly vigorous catapults, and one too many homemade nose jobs on my old board, I decided that it was time for some new gear. I buy only the latest and highest quality equipment (cough, cough), so I set myself a massive budget of £30. To put this into perspective, this same amount will buy you a grand total of two Dakine foot straps or 1/100th of a 2020 starboard phantom race board. They say that you get what you pay for, but I was going to completely ignore that and try out some of the cheapest kit available on the Internet!

After scrolling through a few pages of ancient gear on eBay, I focussed my attention on Facebook marketplace. Adverts on Facebook are often misleading when it comes to the list price, so it is always worth reading the description to find the true cost. One listing in particular commanded a price of £5,000,000, which was ever so slightly out of my budget, but I clicked on the advert anyway on the off chance that there was a deal to be had.

Scrolling to the bottom of the item description, I saw what every bargain hunter dreams of seeing –  ‘GARAGE CLEAR OUT. TOO GOOD FOR THE TIP’ One short trip to Bognor Regis later and I was in possession of a vintage AHD slalom board for the grand total of £0!!!

Disclaimer: please check the equipment is seaworthy before using. It might not actually be too good for the tip.

I was now in possession of an AHD Exocet special edition 265. According to the manufacturer’s warning sticker, it had 70 kg of buoyancy, which for some reason was mostly concentrated in front of the mast track and had been shaped into a lethal looking point at the nose. The slippery deck was clad in a stylish cream livery, which matched my Granny’s front room wallpaper. The deck pads were also far from luxurious; they had started to degrade, which left black marks all over my feet and provided about the same amount of cushioning as a damp paper towel. To sum it up with an Indiana Jones quote: ‘It belongs in a museum!’ 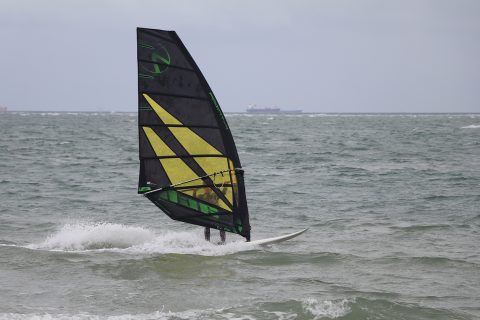 When I arrived at Hayling island west beach I was slightly nervous to say the least. I had checked the board for damage and I had been told by the previous owner that it was watertight the last time he had used it, five years ago! At only 70 litres, it was the smallest board I have ever owned. I weigh about 85 kg without a wetsuit and I was quite apprehensive given the inconsistent wind conditions on the day.

I nervously left the safety of the beach and entered the water to attempt the maiden voyage. With a large portion of the buoyancy concentrated in the nose, my technique had to be adapted slightly, but after a shaky first attempt I was up and going! With such a thin deck, centreline discipline was vital, but sure enough the nose slowly rose out of the water and I glided majestically onto the plane.

For a board that is older than I am, it was surprisingly fast and I started to cruise easily over the south coast chop. The long pointy nose protruding from the water took a while to get used to, but surprisingly it handled lumps and wavelets with ease and overall gave a wobbly but fairly comfortable ride.

The issue of turning around though started to become quickly apparent. I had an idea of coming in close to the beach to show off a nice gybe to onlookers, but that was hampered by the thin and slippery deck. The geometry unfortunately meant the board turned about as nicely as the Poole harbour chain ferry, so I didn’t manage to impress my audience of dog walkers on this occasion. The lack of grip on the deck was rapidly frustrating my efforts and it eventually culminated in a very scary moment where one leg slipped either side of the board and almost caused a nasty accident. I took that incident as a sign to promptly end the session, and headed into the beach to have a well-earned cup of tea in the car.

Overall, I achieved my goal of new kit on a budget and I didn’t have to be rescued which is a bonus! Some kit really does belong at the tip, but every so often you find a hidden gem, so keep your eyes peeled and maybe one day you too can own an AHD Exocet special edition 265!

« FRESHWATER BAY: ISLE OF WIGHT
MOVE ON UP: FOILING AROUND »