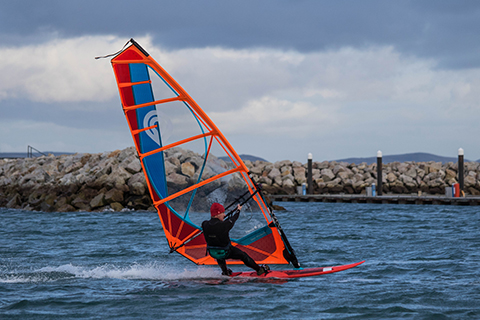 THE VERDICT
A rider-focussed super-charged freeride engine that will satisfy the ambition of even the most assertive user, the Nexus marries crisp precise power with supreme balance and dependability. 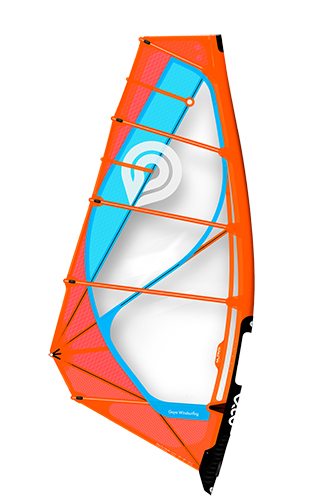 OVERVIEW
The Nexus is a long-standing member of Goya’s lineup and has evolved into their specific five-battened freeride sail, sitting in between their extensive wave sail offering and the more recent freerace ‘Mark’ option. Available in sizes ranging from 4.9 to 7.4 it is compatible with either RDM or SDM in all bar the smallest sizes, and comes in one distinct orange-blue colourway. The build of the Nexus has a real air of quality, as with all Goya’s sails, using lightweight scrim throughout its perimeter (including Kevlar x-ply in the foot panel), plenty of the brand’s signature stretch control tendons from the clew and all the usual finishing touches such as a ripstop luff sleeve and moulded tack fairing. Rigged on a ‘Hundred Pro’ RDM mast, it sets with the most luff curve of all the sails in this test group, applying tension until the leech’s looseness meets the marker at the front of the upper mini-batten. Skin tension through the sail’s panels is high and the set is wonderfully clean, without a crease or blemish in sight. And whilst the leech falls away progressively to batten four, there is definite shape forced into the sail’s lower panels, the two lowest battens sitting away from the mast at rest.

BRAND CLAIM
“The heart and soul of freeride windsurfing is realised in the Nexus Pro. Excellent low-end power, stability and easy control, blazing speed, big jumps and hard carving manoeuvres, the Nexus Pro will deliver beautifully on all of the above.”

PERFORMANCE
As soon as you step on the board and feel the feedback provided by the Nexus, you’re left in no doubt that it’s a very different proposition to many. Whereas several lofts are directing their proposal for this category down the soft and progressive delivery pathway, Goya are instead offering crisp, direct and purposeful power with the Nexus. The sail feels firm and forceful, the extra give in the luff sleeve allowing the draft to expand and generate more pull. It has excellent bottom end, the centre of effort further back than many, focussed around the rider so that there is plenty of useable feedback through the back hand. It accelerates instantly and settles into a comfortable stance, constantly engaging the pilot and actively turning the energy from gusts into extra speed, accelerating in the hands. It has a very precise nature and in fully powered conditions was a fantastic blasting machine for the experienced rider, partnering efficient freerace boards well. In transition the Nexus performs admirably too, powering into the turn in confidence, the battens snapping positively to the new tack and providing the impetus to accelerate out. With all our talk of crispness and precision, the more nervous rider may well be put off the Nexus, thinking it’s too sharp for them. However, the other major ace the Nexus has up its sleeve is its controlled handling, making it more than applicable to the inexperienced. It is easy to rig accurately by following the guide, the single clew eyelet enhancing the plug and play ease, and once set the Nexus has a fantastic natural range, the draft rock-steady and stable, the power dependably solid in both hands. We did tinker with the downhaul a little, and an extra centimetre or two on the downhaul offered a fraction more efficiency and release for those drag runs off the wind; but for most, the prescribed setting would more than suffice.

Other Sails in this test: