Check out the last day highlight clips and the official report from the GWA Wingfoil World Cup SUI where the World’s best wingfoilers come together for spectacular surf-freestyle & surf-slalom event on Lake Silvaplana in Switzerland.

The Ensis ENGADINWING by Dakine kicked off on Tuesday 14th with a premiere in St. Moritz and Silvaplana (SUI) and went through until, Sunday evening, June 19th, 2022. World champions and European champions from three continents showed wing foiling at the highest level. More than 70 athletes from 14 nations travelled to the Engadine and enjoyed the unique lake landscape in the Engadine as a competition stage. 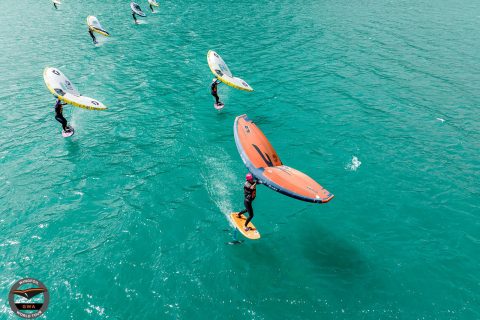 A picture-perfect morning was how the final day started: With no cloud to be seen, bright blue skies, and a forecast that showed promising wind, the stage for some thrilling final heats was set. In the men’s surf-freestyle discipline, the just 16-years-old Chris Macdonald (USA) was going massive in all heats so far. His final against Stefan Spiessberger from Austria was one not to be missed. Both riders put on an incredible performance with Macdonald scoring 32.93 to Spiessberger’s 25.17. Titouan Galea (New Caledonia) won his 3rd place final to secure the third place. Over to the women’s surf-freestyle, the final was between Paula Novotna (CZE) and Spain’s Nia Suardiaz. With 21.8 to 19 points in this last heat of the competition, the Czech rider was victorious in the end. Flora Artzner from France dominated her 3rd place final and completed the podium. 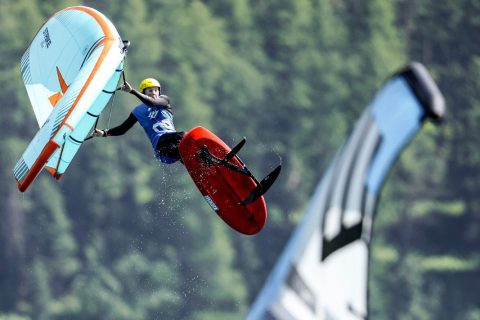 In the women’s surf-slalom competition, it was another event to remember for Flora Artzner (FRA) as she claimed her second title of the year. Combined with her other finishes, Flora came out on top after 11 thrilling elimination rounds. Paula Novotna (CZE) and Nia Suardiaz (ESP) had very close races in near all heats: In the end it was Nia, who showed more consistency throughout which edged her that second-place finish. Back to the men’s surf-slalom, the outstanding rider was Francesco Cappuzzo (ITA): With top finishes in nearly all heats he participated in, the Italian waterman was all about speed.