John Carter looks back on his first trip down to Cornwall following the first UK lockdown!

The lockdown no doubt affected every windsurfer in some way or other. We stayed at home, spent time with our families and stayed off the water for six weeks straight. It was a strange time! Who could have predicted that Covid would change the world as we know it in a matter of a few months? It turned out to be a time to reflect, a time to stay positive and a time to reassess certain values. 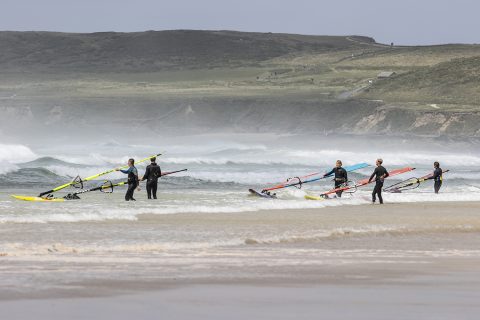 In the midst of the crises none of us knew the outcome and while I am writing this, we still don’t really know how the future or the new normal will evolve. Being off the water was like a torture to some but at the same time it was that perfect chance to spend valuable time with our families, stay fit in other ways or catch up with some of those home projects that have been eternally on the back burner. Travel was off the cards, even driving to your local beach for non-essential purposes was frowned upon. These were unprecedented times and the affect this confinement would impact on the windsurfing industry was worrying. 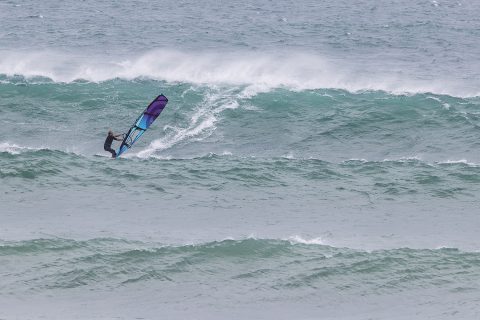 As Peter Hart eluded to in his Affairs of the Hart in Windsurf issue 396, once the green light was given on the 13th of May that we were allowed back on the water, windsurfing was exactly the freedom that many of us were yearning for. That feeling to be back on the water flying across the sea powered by the wind was something that not only appealed to the windsurfing diehards but it also too many who had abandoned ship and sought out alternative sports or had just gotten lazy and let windsurfing go. 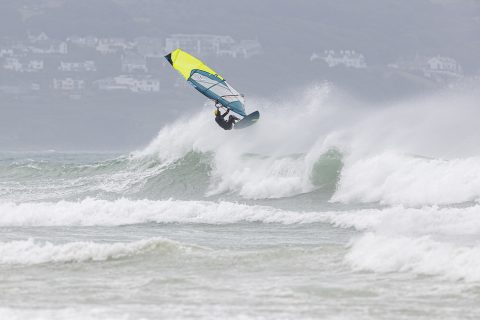 Funnily enough during lockdown the weather went hot and balmy anyways, a kind of calm before the storm before it blew its socks off in June! When the wind blew after lockdown, local beaches were packed like the old days. Peter Hart said he had never seen Wittering’s as busy and the likes of Branksome, Avon Beach, Shoreham and Poole Harbour were also awash with sails flying across the water. Yep, windsurfing was the fix we were craving and the perfect way to social distance while having fun and scoring our daily exercise. Just getting on the water in general seemed to be what many needed. Windsurf, Foil and SUP products were flying off the shelves and some shops were struggling to replenish sold out stocks. Nobody could have predicted that either! 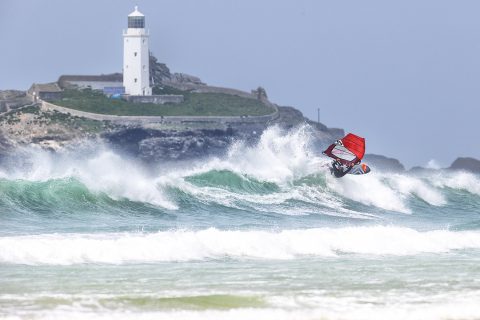 By June restrictions were becoming more relaxed and now we could travel again, possibly to score waves and better conditions. In the last four months, I had only travelled off the Isle of Wight once for a day trip to Weymouth and weirdly enough I felt a sense of relief when I made it back home into my own little bubble. After thirty or so years of jetting around the world, this was most certainly going to be a vastly different year. Most of my income comes from shooting events, and guess what? Pretty every event on this year’s PWA calendar was already cancelled. With international travel virtually off the cards, the beaches of the UK were going to have to be my preying grounds for the foreseeable future. Staying at home, or at least staying in the UK for me was definitely going to be my new normal! 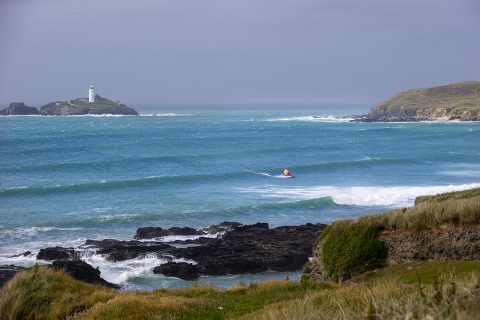 NATURE PAYS US BACK!

Towards the end of June, a rare summer Gwithian forecast popped up on the radar. Nothing massive but a west swell with 2.6m waves at 12 seconds and southerly winds was almost certain to serve up some decent wave riding, especially for the time of year. It was almost like natures payback for the past month’s confinement. 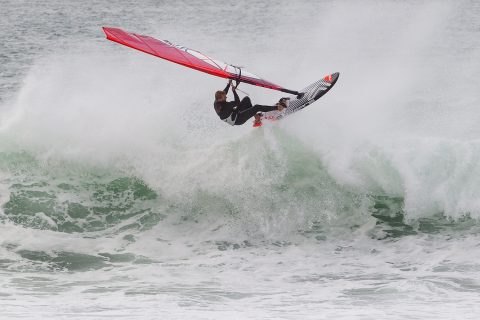 I knew Timo Mullen would be all over it having strictly served his lockdown sentence without hitting the water when all the government warnings were in place. In normal times I would also be well up for a couple of days in Cornwall but living on the Isle of Wight kind of comes with complications. Only three of the five ferry crossing routes were running and all of those were with restricted timetables and the compulsory wearing of face masks. I had heard through the grapevine that quite a few sailors from the south coast were planning on a hit and run mission to Cornwall to enjoy this summer bonus wave session, so after much deliberation, I decided to join the party and jump in with Timo but first, I would have to make it to Poole to grab a ride. In some ways this quick sojourn to Cornwall was a chance to feel normal again. See a few familiar faces from a safe distance and score the chance to dust of my cameras. 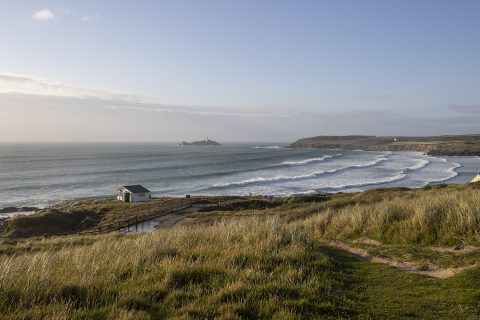 I had to wear a face mask for the first time on the ferry which felt very strange. There is something about masks that makes everyone look a bit creepy but at least up on the top deck outdoors you had the option to take it off. I then trekked through the quiet streets of Southampton, caught a train down to Poole, sat alone in an empty carriage, again with a mask on! Everything felt surreal to be honest, but I made it to my destination keeping my distance along the way. Moving around before was just something that was taken for granted now, I was taking in every moment with a different perspective and trying to get on with life in the safest possible manor. 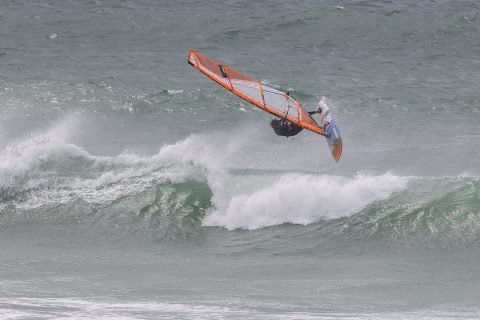 We cruised down to Gwithian where there were already a bunch of vans in the car park waiting on the high tide to peel back from the rocks at the bottom of the goat trek. As soon as I arrived, I grabbed my camera gear and wandered away from the crowd, determined to keep my distance, respect the locals and just do my own thing. The awesome thing about windsurfing is that the social distancing on the water especially with wave riding is a natural thing. You line up on a swell, ride the wave, kick out and then head out for more. Today was actually quite windy compared to the forecast so the action from the word go was thick and fast. The beach here is huge and wide open with space for everybody so no problem there. It was windy, maybe 4.5m or smaller and the surf was pumping considering the time of year. All the old faces were about as well as plenty of new guys and a few that had made the trip down for the day. Windsurfing just seems to have ticked that box for our escape from all this madness and resume life as we knew it before. Just to be able to get in the water is often remedy enough to refresh and reenergize but the challenge of wave sailing of a tricky day was sure to burn off the cobwebs. It was awesome to see so many sails on the water and a lot of smiling faces. Andy Chambers had driven down for the day, sailed five hours until his lockdown hands were raw and now faced another three-hour drive home. Was it worth it, hell yeah even with raw calluses! 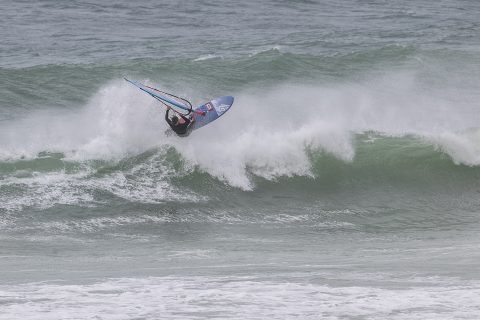 The likes of Chris Muzza Murray and Jamie Gibbs had taken the day off work to fully utilize this epic summer forecast and sailed two long sessions. Timo was on the water for six hours loving every minute. 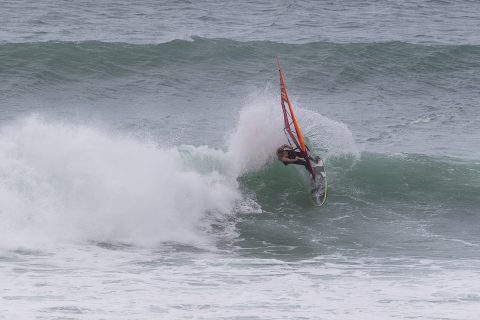 The likes of Blacky, Andy Fawcett, ED Buchannan, Ian Ross and a bunch of other locals were also out there like any normal windy wavy day. The après sail chat in the car park was done at a distance with everyone keeping to their own space. Some guys just rocking up sailing, jumping back in the car and leaving while some stopped for a chat, keeping to the two metres. Aside from that little bit of distancing the beach felt safe and just like any normal day. Of course, despite the Covid situation, nature still does its thing, life still goes on and windsurfing remains one of the best ways to revitalize, stay positive and keep healthy! I made it home safely glad that I had made the effort to shoot this awesome day on the water. 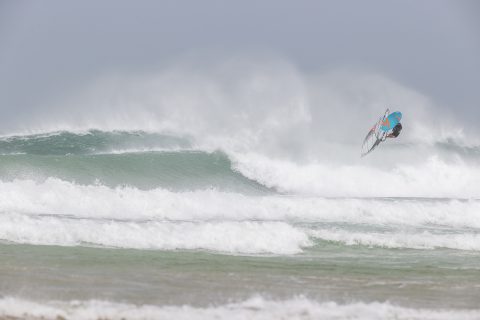 Timo forward off the lip

It was not the best I have ever seen Gwithian by a long chalk but just getting out for a day in the fresh air, seeing so many people on the water and being back behind the lens made me feel that I can work with the new normal and that windsurfing is definitely alive and kicking!