Five-times PWA wave world champion, Philip Köster, first started competing professionally when he was just twelve years old! Now twenty-seven and a dad, he gives us an insight into his life on and off the water. 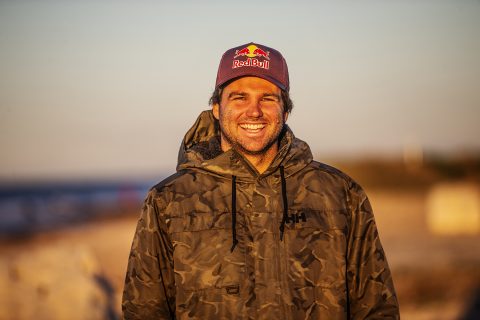 I put the time in on the water to keep progressing. I think one of my strengths is analysing moves. When I watch a video, I can quickly work out how to do the moves when I am on the water. I think that is something instinctive I have in my mindset. It doesn’t work for freestyle so well, but for wave sailing I can pick up moves pretty quick.

I look up to a lot of the top surfers. All of them are very inspiring in the way they train and get ready for contests. I don’t think many of them party too much! 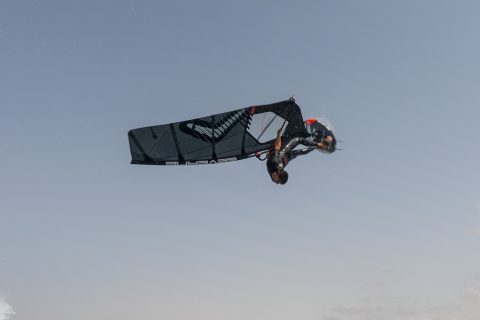 I have had quite a few lows, I think. I didn’t enjoy the contests where there were very light winds. The 2019 Aloha Classic was very light at Ho’okipa for example, and I didn’t have time to train there much or in those type of conditions. Also in Sylt I have had a few nightmare heats where I have ended up on the groynes. Once I got dragged onto them and didn’t even make it out. Even in Pozo I forgot to do one jump in one of my heats. That hurt. Those things happen and you don’t forget them. In 2011 I had one of my best years where I won all of the events. That was my really happy time and was my first world title. 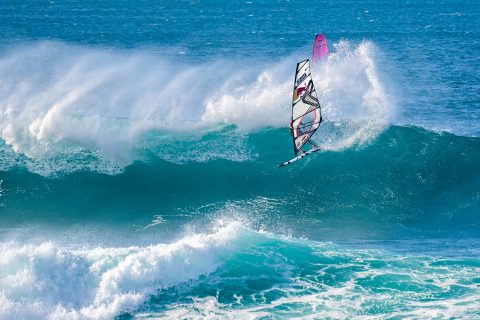 I just enjoy being on the water and trying new moves. If I do a wave ride and I don’t fall in because I have not tried anything, it makes the session kind of boring. On nearly every wave I always try to do a trick or a difficult manoeuvre. After the quarantine I was a bit fed up with just sailing at Pozo. At least on Gran Canaria we have quite a lot of different spots. You can get different sailing in if you hunt around. In the north and south there are other spots that can be decent and not many people sail at. Normally I never train in Pozo, I am usually sailing somewhere else. Now I actually live in Pozo, but I still prefer sailing in other places a bit away from the crowds. 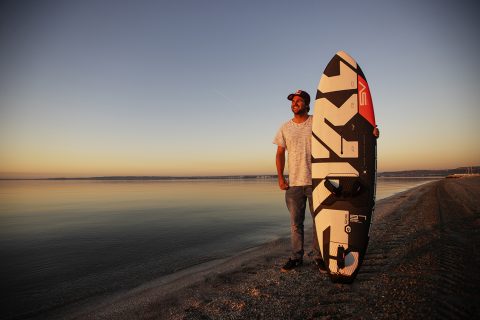 I think I am quite relaxed at events and don’t get too stressed. I don’t listen to music or anything like some of the other sailors. I like having my family and friends around me while I am competing. If there is a final coming up, of course there is some pressure. You know that you are going to have to land everything perfect to beat guys like Ricardo or Victor. You have to produce the best you have in both jumping and wave riding. Those intense high-pressure heats I actually enjoy the most. Heats against Ricardo, Victor and Brawzinho, all those top guys, that’s what I live for. Ricardo is probably the most challenging sailor to compete against, but heats against him are also the most exciting because he does all the biggest jumps and crazy doubles. Sailing against him I will have to go huge as well. That is why I compete also. I like to be pushed to my limits. 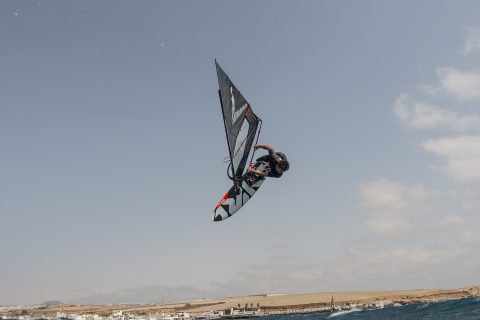 The beginning of the lockdown was pretty extreme in Gran Canaria. We could barely go out for about two months. After the first phase I was able to windsurf, but all the time the police were calling me in off the water to check my permit and that I was a professional sportsperson. It was tricky, but at least we were able to go on the water finally. It was very strange but hopefully everything is going to be back to normal soon.

Most of my rivals live in different places to me, so we kind of keep our distance naturally. I am not the ‘hang out’ type of guy. I don’t usually chat with those guys too much. Normally I go to the water, come out and then go and hang with friends or family. Of course, I chat with guys like Ricardo when I see them at the beach, I have no problem with them at all, but I am not going out to dinner or beers with them. I respect all the top guys. All those guys like Ricardo, Swift and Brawzinho, they put a lot of effort into their windsurfing and that is what I like. They also travel around to windsurf in different places, rather than just stay in one place, which is cool to see. To see motivated people is cool. 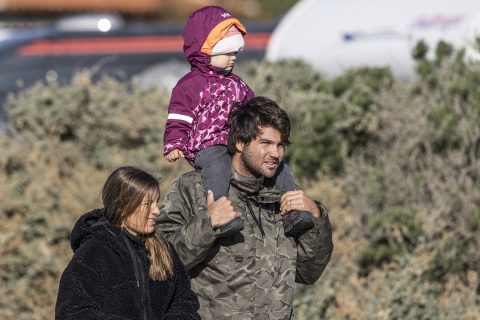 Even as professional windsurfers, most of the time we are off the water, and since becoming a dad I spend a lot of time with my wife and daughter. Being a dad is really fun; it has not changed my lifestyle too much so far. Maybe I am a bit more responsible now? I still go for the biggest jumps on the water, there is no holding back there. It has not stopped me from pushing my windsurfing at all.

I like to escape from being a pro sailor by spending time with my family. My daughter does not know me as a windsurfer, she knows me as a normal dad, and I do all the normal dad things, like going for a walk, playing in the sand or taking her to the playground. I enjoy that. I am not really a walking type of person, but with my daughter that is different. You kind of have to and it helps me keep fit also. 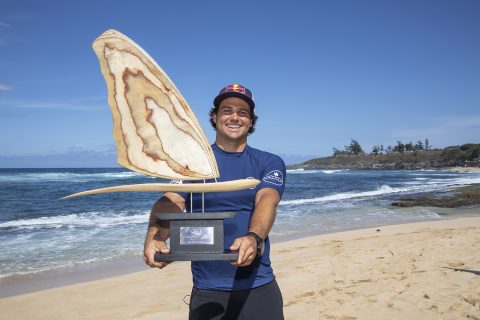 Most of the time I spend three to four hours a day on the water. I try to sail most days of the week, but obviously have a day off when I am tired. Normally that day off is to go to the physio to recover from all this.
Since last year I have changed my programme. I started training a bit in the gym with a physio. He helps me a lot to keep up the schedule. I am also getting older so I have to take care a bit. I am twenty-seven now and have been windsurfing for a long time now. My first world cup was when I was twelve.

If I am tired of the beach and have been sailing too much, then I like to go up in the mountains and just switch off. I like to get away from the beach sometimes as I spend so much time there in my life. 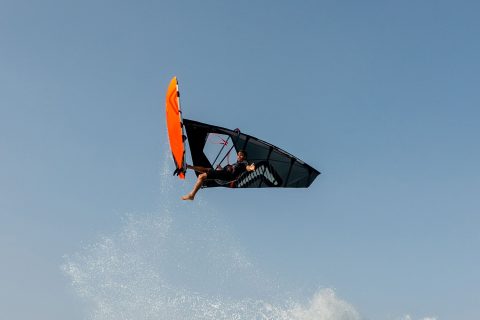 I really like to always do my best. I don’t compete just to have fun; I am going there to win. That is my mindset when I go to a competition. I try and spend as much time as possible on the water and also keep an eye on how all the other guys windsurf. Though it has been pretty hard during the past two years to gauge how the other guys are sailing!

Obviously, money is important. Money is a nice extra I would say. Having said that, I think I would do contests for less money. You need money to survive. But at the moment I just want to compete. Having no contests for two years has been quite tough for me. I would say it is depressing almost. We always had something to look forward to. A lot of the contests this year were not cancelled straight away, but in a way, I knew they would all be cancelled in 2020 and 2021. Before they were cancelled there was a little bit of hope, so I was still training for it. Once they were gone, I found it tough without anything to aim for. I was going on the water without a goal and not knowing what is going to happen in the future. There was nothing to train for. I was still having fun but there was not the extra motivation to do push myself. I was not training for a twelve-minute heat like I normally would.

I don’t mind what tack I sail on, and would love to compete in Cape Verde. I was at the last event there, but there were no conditions. After seeing all the incredible images from previous events there, I would love to sail in perfect waves like that. I have never competed with perfect waves; it always seems to be cross-onshore, except for the few contests we have had at Ho’okipa.

I really would love to win at Ho’okipa and that is why I went to Maui this winter to train, so I am more prepared if we compete there again. That is my goal. I just need to spend more time in Hawaii. Before the pandemic I was there quite a bit, but it is not enough to compete against Brawzinho and those guys who live there. There are so many guys who rip there. 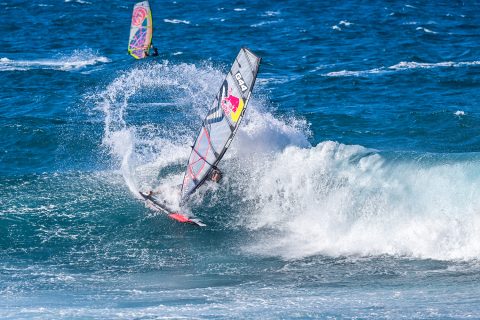 The Pyro is my design and I am really happy with it. I tired to make the board as fast as possible but still ok for down-the-line. I still want to wave ride as well as jump. The wave riding side always has to be there. I like a fast board for onshore and side-shore conditions, but it also has to work in the waves. So, it is kind of an all-rounder. I play around a lot with the fins. If it is firing for wave riding, I run quad fins. If there is a lot of current, I use the thruster and for onshore, the twin fin.

« DÉFI SUPERSTARS: RETURN OF THE DÉFI
55 YEARS OF WINDSURFING »