Windsurf MagazinePROJECT JP - A BOARD FOR NAZARÉ

A BOARD FOR NAZARÉ

Early November 2015. I’m heading from the sleepy north shore town of Paia in Maui to the lush greens of ‘upcounty’ Haiku, following Jason Polakow on a mission to build his Nazaré board.
I spot a house with a large shaping room ahead and inside JP shaper Werner Gnigler is already fully covered in foam dust. Stopping to sand, Werner immediately starts to talk to Jason. ‘’On days with huge swell, enormous masses of water are moving and the waves break in front of the cliff creating heavy back-wash’’, Werner explains, ‘’thus, the waves are super choppy’’. Full of respect Jason adds, ‘’also, I can‘t expect to catch many waves.’’ 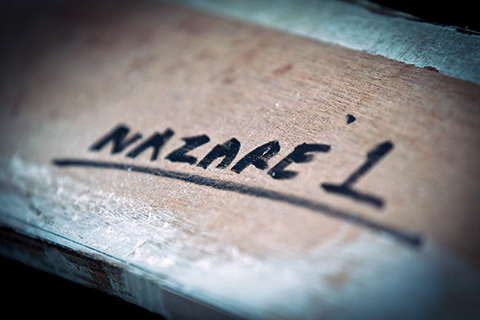 Gradually, they both discuss length, width, outline, volume, spread of volume, rails, the bottom shape and its curve. It becomes clear that this board will have to be something special as the conditions vary strongly from other big wave spots that Jason has sailed before like Jaws, Teahupo’o or Cloudbreak. They both keep moving back and forth between the shaping room with its templates to the office with Werner’s computer and the shape files. Fully motivated, Jason re-positions the stick on the bottom curve of his latest Jaws board. Werner starts to explain, ‘’The base is always the ‘’Radical Thruster Quad’’, the production JP wave board which you can get in every shop, but the bottom will be tuned with a slightly flatter rocker line’’. Jason smiles, ‘’after all, you have to get onto the wave first!’’

Jason starts to explain how the board should perform. The board will be longer and wider, carrying more volume than Jason’s other ‘’Big Wave’’ boards. Werner continues, ‘’The wave is extremely high and fast. Despite its size it is hard to catch. With a rockered and slow board, you’d need to place yourself closer to the critical section of the wave. With a bigger and faster board you can catch the wave further outside and plan your ride and find the best position on the face. The production board is the base. We know that board works very well and we only adapt it slightly to the given conditions. This way we also maintain the character. At Nazaré there is no chance to have some warm-up test runs to get used to the board so it is important that it feels familiar. The base dimensions are 240 x 56 cm, 88.5 litres. In huge waves, there is a lot of water moving. And even if the big waves look mostly smooth and flat on the photos, they are always choppy. Especially at the extreme speed Jason will achieve on the face of the wave, a heavier board can increase control. To achieve that, some of Jason’s big wave boards feature tubes which can be loaded with lead – hence, the two holes with caps on the nose.’’ 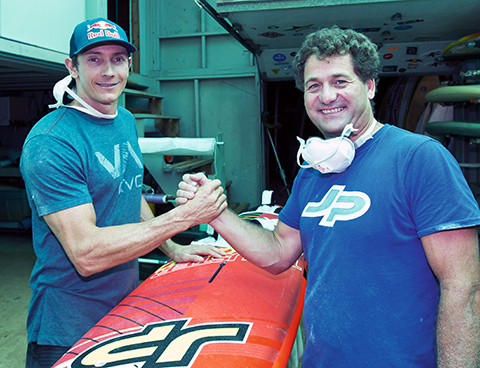 Spending time in the shaping bay with Jason and Werner, it’s obvious they have worked together for a long time. Werner confirms, ‘’Yes, I transfer Jason’s ideas into foam – the boards are always co-productions. After all, Jason’s experience is unmatched, especially with giant waves!”  “I tell Werner what I want and he knows what to do to make it happen!”, Jason says laughing as his eyes light up looking at their latest design, which we now know, worked exactly as planned!

“ I tell Werner what I want and he knows what to do to make it happen! ” Jason Polakow