From our August Issue of Windsurf Magazine we hear all about Kimmeridge Bay from one of the local experts: Timo Mullen!

Renowned for its windsurfing and variety of spots to sail at, Kimmeridge Bay is a wave sailing jewel on the south coast of England. Timo Mullen gives a guide to its shores while reflecting on why a recent session there was a reminder that there is no place like home! 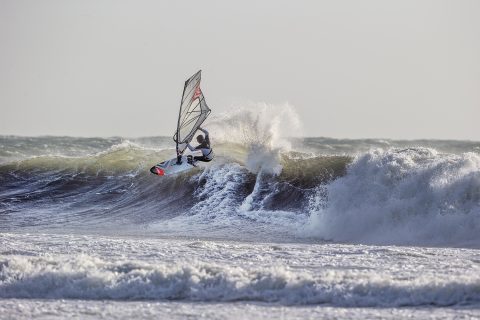 Carve off the lip at K Bay

When I decided to move to Poole in Dorset, the range of quality windsurfing locations nearby was a major drawcard. One of the best in Dorset, if not the whole south coast of England, is Kimmeridge Bay, or ‘K-Bay’, as it is often known. It has a couple of really world-class breaks. The main part of Kimmeridge is the actual bay, which is kind of known as a more intermediate sailing spot. I actually sail the bay 90 percent of the time when I sail at K-Bay. The jumping is insane and also the wave riding on the west side of the bay can be really fun. The wave can be pretty hollow and I have had some of my best hits and wave rides actually just in the bay. 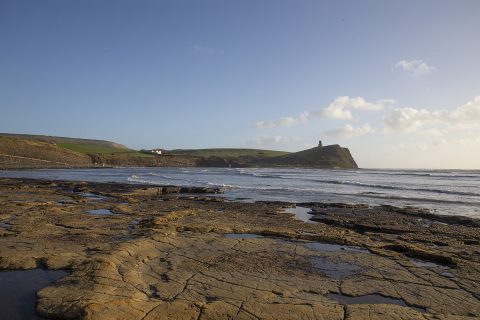 The ‘Ledges’ are a series of rocky ledges east of the bay; they are a more ‘bowly’ wave and get a lot bigger than the bay. We generally sail the ‘Ledges’ when the wind is from the west, which is dead side-shore and it can be quite a challenging wave to sail. A lot of guys have broken equipment out there and I would say the ‘Ledges’ is more for experienced sailors only, stick to the bay if you have just bought some nice new gear and you want it to remain shiny!

The jewel in the crown of Kimmeridge, and definitely only for expert wave sailors, is ‘Broad Bench’. Lying on the western side of the bay is a world class right hand point break. It is extremely heavy and one mistake on the ‘Bench’ and you have a high chance of breaking a mast and a long walk back to the car park. The walk back is about thirty minutes across the rocks with broken equipment and it is not a pleasurable experience. The wave breaks off a slate sea bed and dumps fast and heavy onto the reef. But, if you score a good one, the wave riding can be as rewarding as anywhere in the world. 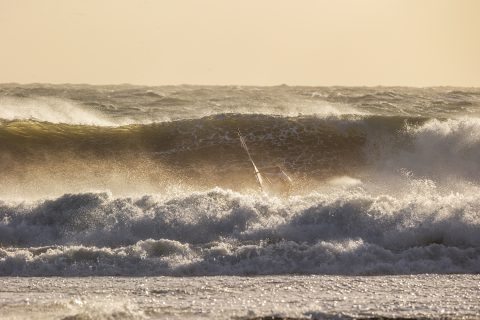 TOO MUCH TO HANDLE

Last December we scored a pretty classic Kimmeridge day. We had strong west to northwest winds, a decent sized southwest swell and sunshine. The conditions that day were logo to mast high and pumping. A few weeks previous to this session I chose to travel to Île aux Vaches in Brittany, France, which is a similar wave to Broad Bench and works on the same forecast but needs a much bigger swell. I actually missed one of the best days at my home break by going to Brittany. In hindsight, heading to France was a bad idea, I bit off more than I could chew in terms of what my body could handle. I realize that I am perceived to be the guy that is always travelling long distances and driving crazy massive miles to score the best sessions, but that trip was one step too far. I left my house at 6 p.m. in the evening and drove non–stop for 14 hours with just 45 minutes sleep. We arrived at the break the following morning to immediately jump into a new spot that was breaking up to double mast high. It was also really heavy; I felt my windsurfing level was terrible that day. Maybe the worst I had windsurfed all year, even though it was some of the best conditions I have ever seen. It was a lesson learned, my body has its limits. Getting no sleep and then straight into performing in double mast high waves and the cold is not possible for me. I also missed a great day at home to rub salt into the wounds. 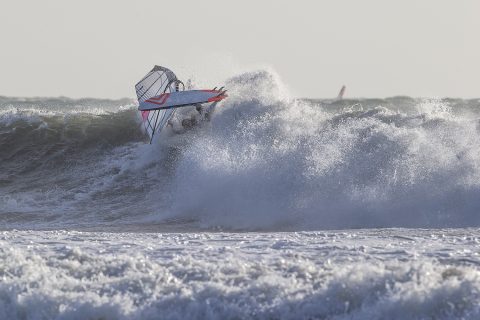 It is not only the conditions that are a little bit elusive at Kimmeridge. ‘Broad Bench’ actually sits inside a military firing range. The difficulties with that are that the military are nearly always firing during the week. Which consequently means ‘Broad Bench’ is largely out of bounds for windsurfing, surfing and even walking. If the conditions are good and you want to windsurf ‘Broad Bench’ you have to obey the rules and choose one of the other breaks if the military are firing. The ‘Ledges’ in a northwest wind and a decent swell can be just as much fun to sail as ‘Broad Bench’. Yes, the ‘Bench’ is the massive point break, but actually for most riders the ‘Ledges’ will still offer amazing windsurfing. 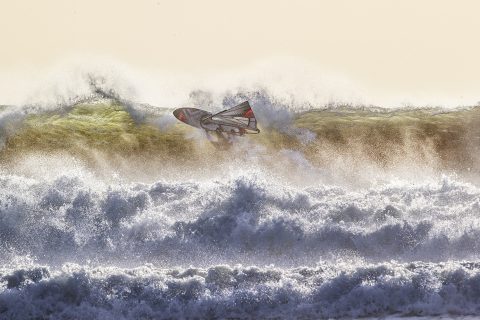 WHEN IN DOUBT, DON’T GO OUT!

The military and the surfing community have worked very closely together to help manage the situation at ‘Broad Bench’ and there is a very clear flag system that operates at K-Bay. Basically, if the red flags are flying on the western shore of the bay then ‘Broad Bench’ is out of bounds. There is also a red flag that flies above the range warden’s hut in the lower car park, which signals if the ‘Bench’ is a no-go zone! If you are in any doubt, always go to the range warden’s hut and ask what the status is, they are more than happy to help. Whatever happens, do not disobey the rules! They have a local by-law which means it is an arrestable offence to windsurf or surf when the red flags are flying! 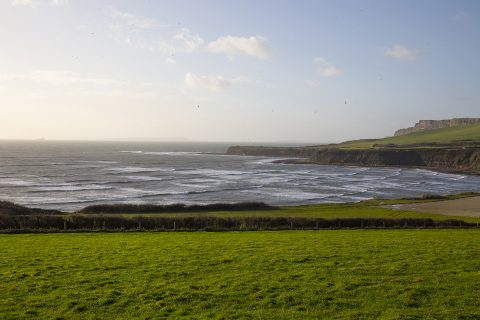 So, a few weeks later after my French trip, I had my chance to get my mojo back. It was actually a very special session with only myself, and a couple of the local crew, Mike and Neil. As per normal at Kimmeridge, you kind of have to be there just as it is getting good. I receive a lot of calls from people asking me will it be on at Kimmeridge? The truth is most days you just never know and a lot of people don’t want to drive away from their local beaches on an iffy forecast. You really have to be lucky to catch Kimmeridge at its best and this day was pretty epic. Logo to mast high waves and I was perfectly powered up on my 4.7m Severne Blade with my Mako 91 board, this day was the perfect opportunity to redeem my spirits after the let down in France. 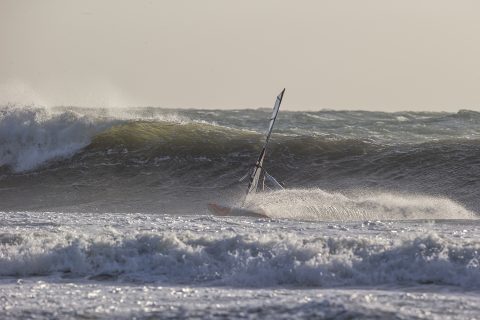 I think that these sort of ‘redemption sessions’ happen to us all, maybe you sailed badly in your last session, broke some gear before you had a chance to shine, or simply turned up too late to hear the most hated saying in any weather related sport, “You should have been here earlier!” This day at Kimmeridge though really was my chance to reset after Brittany. Broad Bench is my safety net, I know every nook and cranny of the reef there; maybe that is how the local boys in France see Île aux Vaches? Maybe I had plateaued as an athlete and my trip to France was the start of my spiral downwards? Well a session at my home break in perfect conditions I guess would be a good litmus test to see what went wrong in France! The anticipation of catching a good wave at ‘Broad Bench’ is massive. When it is on the swell lines are clearly defined, so you have plenty of time to prepare yourself to draw your lines on windsurfing’s ultimate blank canvas. Shall I bust a 360, shall I hit an air off the first section or shall I just enjoy the ride and carve it to pieces? It is redemption day, so I don’t hold back and ride it like I stole it!! Suffice to say the session was one of the best; actually I tend to always say that! Maybe it is not the conditions that dictate a good session, maybe it is your own form and mental attitude? I have had just as good a feeling after a bolt onshore session in the bay, but within that session I maybe landed a sick 360 or stuck some new move. In fact I have had some of my worst sessions, only to land a move in the last 5 minutes to turn things around. My session in France had nothing to do with the conditions, they were what I dream of! My performance was about my lack of physical and mental preparation, a lesson learnt. I needed a good session at home to redeem myself; it was definitely my redemption day! 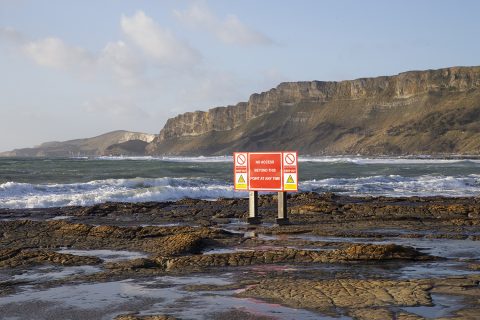