This is the review from our test team of the Slingshot Hoverglide Fwind V3 (infinity 84) foil, which was featured in our August 2020 edition of Windsurf Magazine. 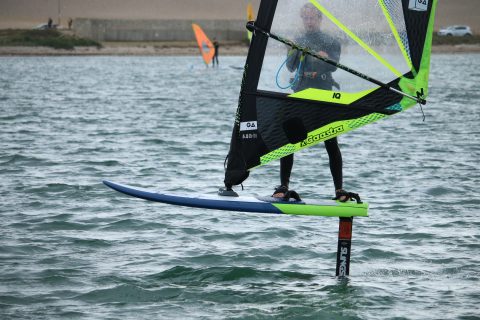 You’re a windsurfer that wants the ultimate go-slow pump foil wing. This wing is for the wind foiler that wants to be able to do carving tricks, foil out with ease and ride the tiniest bumps while luffing the sail.

Last year we tested the third version of the Hover Glide FWind, complete with 90 cm mast as standard, and were suitably impressed with its performance, stating it had “such a playful character … making an average session that much more enjoyable.” So it comes as no surprise that the V3 has remained current for 2020, and rather than going over a well-trodden path, we thought it an opportunity to try one of Slingshot’s many other front wings in this test. There are a total of eight compatible front wing options in the Hover Glide range, from the monster Infinity 99 (with its colossal surface area of 2371cm²), to the original wing that formed the basis of the Hover Glide modular system – Time Code 57 cm, with just 707 cm² of area. The 84 is the next wing up in the range from the standard 76, so it would be interesting to see the benefits it brought to the standard package. Slingshot UK describe the 84 as, “Designed for teaching windsurf foiling in light winds and for heavier, less proficient pilots, as well as a good all-rounder for SUP and Wing foiling.”

As with everything in the Slingshot range, the foil’s components are well engineered to cope with the corrosive environment we play in. The FWind package comes complete with both pedestal plate and medium Tuttle head as standard, but take heed that the Slingshot’s Tuttle uses 8 mm fin bolts. So if you’re using the FWind with any board brand other than a Slingshot, you also need to invest in some bolt adaptor threads (£8.00), so that standard 6 mm bolts can be used. The foil is put together without any issue, the ‘Switch Fuse long’ fuselage housing the larger wing precisely. We tried this new amplified setup in various boards and conditions, and have to say the amount of lift the Infinity 84 provides is just incredible. You can be super aggressive with it and punch the board out of the water, or stand still and let the foil do all the work. Either way, it almost defies gravity and physics, the way it generates lift with near negligible forward momentum. If you start with the standard 76 and switch in the 84, the lift does seem to come from further back, so we found ourselves experimenting with the geometry of the setup – very easy when using the practical pedestal plate fixing, but a little more time consuming adjusting straps and base plate position it you’re using the Tuttle box option.

Lifting early, with steadfast stability and security underfoot, the Infinity 84 epitomises the ‘Hover Glide’ name, bestowing the pilot with the perfect tempered platform with which to learn how to sustain flight and corner confidently on. Throw it around and the foil retains flight, even at the slowest speeds, giving the manoeuvre-oriented rider the incentive to push their airborne repertoire, or ride nearby swell lines.

As the wind and speed increases, the Infinity 84 almost generates too much lift, the rider quickly realising they have too much sail area and power available in their hands. It also has a definite terminal velocity, peaking at a comfortable speed and making it very clear it has no intention of accelerating further. As such, the extra sail energy quickly turns to handling issues, extending to an inconsistent ride height as the rider tries to control the power. Change down sail size and the same is soon experienced as the foil maxes out. The best option we found is to resort back to the 76 Infinity, an easy process with the removal of just three bolts. So does the 84 have limited appeal? For windfoiling perhaps. It has served the purpose of demonstrating just how good and ‘fit for task’ the 76 is! But more than this, the 84 undoubtedly has its place, particularly with those interested in a multi-sport foil. We had the opportunity to use the 84 for wing foiling, for example, and it was a class act. The ability to lift early was well received and as the wing-foil board tends to cruise at slower speeds (initially at least!), the 84’s velocity ceiling never became an issue. 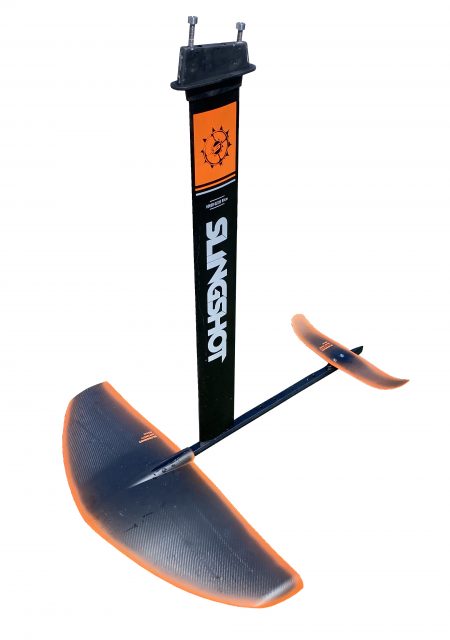