This is the review from our test team of the Starboard Supercruiser carbon foil, which was featured in our August 2020 edition of Windsurf Magazine.

THEY SAY
“A new style of foiling: manoeuvrable, smooth and super fun. Our easiest foil ever. The 1700 cm2 front wing gives the sensation of floating on air and gives the lowest take-off speed.”

The Super Cruiser was a welcome addition to the Starboard lineup in 2019, filling the void in their range for low aspect ease and manoeuvrability. The front wing was lifted directly from the brand’s Wave foil programme, with its large surface area, thin profile (for speed and acceleration) and shallow double concave underside, for directional stability and carving control. With an extended fuselage and enlarged tail wing, the SuperCruiser built upon the foundations of the front wing’s performance, maintaining its manners and predictability when loaded with sail power and travelling at speed. So it’s not surprising that the SuperCruiser remains unchanged for 2020, giving us the opportunity to test the more alluring carbon version here. In essence it is exactly the same foil as we tested last year, yet with a hefty £850.00 extra added to the price tag to account for the only material change – the carbon mast. So was there enough change in performance to justify the inflation?

Assembly is easy and well thought out, the SuperCruiser seeing a departure from the brand’s established windfoil modular system so that the ‘sleeve’ fuselage can house the front wing. There is also a rocker system on the tail-wing/fuselage connection, enabling the pitch of the stabiliser wing to be varied according to preference, more on this later.

Having not used the SuperCruiser in a while, we’d forgotten just how much of a workhorse it is. The whole wing seems to generate lift, rising up uniformly and suffering from little lateral wobble or imbalance. Progressive and forgiving, its acceleration is creamy smooth, doing little to unsettle even the most nervous passenger. Simply stand up over the board and let the foil do the work … or put the energy in and the SuperCruiser shows plenty of willingness to respond. It breathes confidence into the foiling newcomer and oozes the essence of freeride foiling, being both eminently accessible and enjoyable. Fitting the SuperCruiser into various boards and setups, the ability to alter the angle of the tail wing and therefore the longitudinal pitch of the board is a real bonus, tweaking and fine-tuning the setup so that it is easy to establish the right balance. Cruising at a respectable speed it is directionally very stable and predictable, providing plenty of reaching comfort for covering distances effortlessly. Experienced race-oriented foilers may well crave a looser, more slippery feel, but for the recreational foiler looking for the partner to back them whatever the conditions, the SuperCruiser is right up there. In manoeuvre and transition its response is measured and flowing, rather than sharp or crisp. Drive hard and it will respond more immediately, yet it seems to prefer a more fluid and rhythmic path instead of being thrown into tight corners. And so to the question on everyone’s lips: “Is the carbon mast worth the extra investment?” The simple answer is that it’s nice to have the option! Stiffness is crucial in foiling and Starboard’s mast technology has proven time and again that it’s up to the task. If you can afford it, then why not? There wasn’t the slightest hint of twitch or devilment in the SuperCruiser’s flight. But, if not, the Aluminium SuperCruiser at £949.00 is quite exceptional value for an incredibly user-friendly and fulfilling foil. 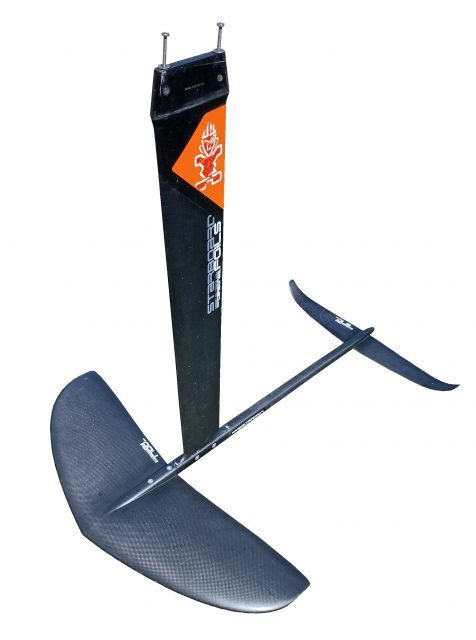